Outlander, Caitriona Balfe interview: ‘Claire Randall is sexually empowered – and there’s no shame in that’

By the Standard UK
For full article
http://www.standard.co.uk/stayingin/tvfilm/outlander-caitriona-balfe-interview-claire-randall-is-sexually-empowered-and-there-s-no-shame-in-a3218621.html 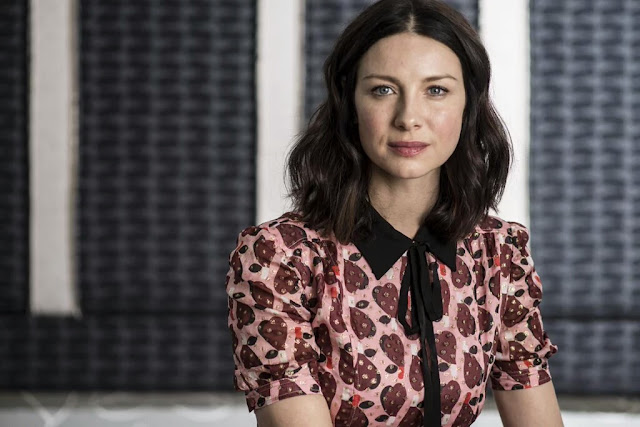 The fantasy drama’s lead actress talks about the show’s female perspective and sexual violence as an act of war!

Actress Caitriona Balfe’s cat has three Twitter handles, none set up by her. So goes it when you star in an adaptation of much-loved novels.

“Fandom is amazing,” she says when I meet her at the Soho Hotel. “The Outlander fans are super-passionate. A lot of them have come from the books so they’ve been obsessed for 20 years. And now they have visuals.”

The books in question are a series of historical fantasy novels written by American author Diana Gabaldon which have sold more than 26 million copies worldwide, while the television adaptation was the most popular premiere in the history of its US network Starz. In the UK, the first series premiered on Amazon Prime in March 2015 and the much-anticipated second series begins on Sunday.

The time-travelling drama follows no-nonsense Second World War nurse Claire Randall as she is catapulted back to 18th-century Scotland by some ancient Highland sorcery. She then becomes embroiled in the Jacobite rebellion and falls for rugged Jamie Fraser, played by Sam Heughan, despite being technically still married to her 1940s husband Frank (Tobias Menzies).

Even just news of Balfe’s casting as Claire incited furious online debate and she has developed a fierce and loyal following. “It’s bizarre. You hope that you get a job first of all, and then you hope that people watch it and then maybe they actually like it. I mean, it’s TV, we’re not doing anything good in the world really but we’re giving some people happiness and that’s pretty fricking amazing sometimes. That’s stuff I never thought would be a part of what we would do. Maybe it sounds really sappy but that’s the best thing that could come out of it.”

For a concept that requires a heavy dose of suspended disbelief, the series has been perhaps unexpectedly celebrated for portraying realistic historical settings, believable relationships, and authentic sex scenes.

Balfe, 36, says: “First and foremost our source material is written by a woman and she’s very self-possessed and smart. Obviously that gives you a female perspective that is very strong. We also have two female writers on our team and we had a female director in for the wedding episode, which had a lot of sex scenes in it. Ron [Ronald D Moore, writer and producer], even though he’s male is very emotionally intelligent and he definitely isn’t interested in doing the same old gratuitous sex scenes that are in a lot of shows. So from the get-go that was always the directive. Claire is someone who’s very sexually empowered. There’s nothing that she’s ashamed of in that. It was cool, it was nice to be able to go forth with that.”

A combination of corsets, violence, nudity and a pretty bleak landscape has led to inevitable comparisons with Game of Thrones. Indeed, when Balfe jokes about the weather on their Scotland sets — “There’s days where you’re like ‘Oh god, why didn’t we shoot in Malta?’” — I assume she’s alluding to HBO’s blockbuster series. But Outlander has been recognised for its tact when handling difficult subject matter such as sexual assault while Game of Thrones attracted criticism for its treatment of similar events.

Balfe’s character is constantly vulnerable to being attacked and the first series culminates in a shocking portrayal of the male lead being raped. “It’s tough because we have a couple of different instances [of sexual violence] in season one. We always talked about it as an act of war. It was used as a weapon against women in war zones and, unfortunately, still is today.

“In terms of Black Jack [the show’s main antagonist, who assaults both lead characters] and Claire, for him it’s not about sex, it’s about power. Even with him and Jamie it’s the same thing. He’s not in love. He’s not a gay man. He’s a sadist and he uses sexual violence to actually reduce them to nothing.”

The positive reception in the US culminated in three Golden Globe nominations for the series, including Best Actress in a Television Drama Series for Balfe.

At the ceremony she avoided drinking early on in the evening as her category was near the end, before accosting Rob Delaney who “looked really scared of me” and bumping into Patricia Arquette in the toilets.

“I was walking into the bathrooms as she was walking out and she commented on my dress and I was like ‘Oh, thank you. I think you’re amazing and I love what you’ve done’ and then shook her hand before she had a chance to wash it so she probably didn’t want to do that.

“The whole thing is such a bizarre evening. I ended up with Sam [Heughan] and a bunch of my friends in my room eating pizza at four in the morning — you always know it was a good night when you’re eating pizza on the floor at 4am.”

When I note that her IMDb page looks fairly sparse for a Golden Globe-nominated actress, she bursts out laughing: “Ha, my CV was so short before this!”

Originally from Co Monaghan in Ireland, she was in her first year of studying theatre in Dublin when she was scouted by a model agent and offered the chance to move to Paris, “which seemed like a pretty good idea” — but it wasn’t her passion. “I had a good few years where it was a lot of fun, I met some incredible people and you get to work with some great artists and everything. But I sort of fell into it.”

In a turn that is about as far from Outlander as possible, she will next be seen in Money Monster, Jodie Foster’s financial-crash drama that comes out in May and stars George Clooney, Julia Roberts and Jack O’Connell. Balfe says she plays “a chief communications office in a high-frequency trading firm” and begins outlining the plot with a fluency that suggests she submerged herself in research about the 2008 crash as thoroughly as she did with Second World War frontline nursing.

“I think it’s happening more now, with films such as The Big Short and 99 Homes, that slowly people are starting to unravel the financial landscape and what happened in 2008. And it was really great to have a female director tackle that situation.”

Balfe is in somewhat of an unusual position as an actress getting her first big break in her mid-thirties, and she acknowledges the need to jump at exciting roles for women over 30. But in the case of Outlander, age is important and a 21-year-old starlet would have been inauthentic at the centre of the show.

“What I loved about it is she’s slightly older than the male lead. She’s been married before. She’s a worldly and wise woman. But he’s quite new, he’s a virgin, he’s young, he’s starry-eyed and that kind of... well, it’s nice to have her instigating things and leading him instead of it being the other way around.”

At the very least, Balfe must be convincing as a character who can handle her booze. Drinking games played along to an episode of Outlander would easily render a Freshers’ Week bar of students unconscious.

Reportedly, Claire is pregnant in the new series and doesn’t let up: “She’s drinking the wine. She’s drinking whisky. I guess they didn’t know back then.”

Balfe had been living in LA once she put aside modelling for acting, but moved to Scotland for what was a year-long shoot for the first series. She talks fondly of rain-soaked days and a tight-knit cast and crew, as well as becoming an “inevitable” whisky fan herself.

“It had to happen. Graham McTavish [who plays clan War Chieftain Dougal MacKenzie] is fond of setting up these whisky tasting nights where we have to taste a bunch of whiskies from different regions of Scotland. It’s great ... if anyone can remember what they drank afterwards.”
Posted by Outlander Homepage at 6:15 AM