“Infinite Circle” - An interview with singer/songwriter and Outlander fan, Allie Aro by your Aussie Blogging Lass


Since the publication of “Outlander” in 1991, the story of Claire and Jamie Fraser has inspired many fans to create unique products. From dolls to needlework, jewellery to clothing, each creation is a testament to the power of Diana Gabaldon’s words. Outlander fans already know of the stirring TV series soundtracks that have been created by Bear McCreary, but what about other Outlander music? Singer/songwriter and recent Outlander devotee, Allie Aro, has just released her new single, “Infinite Circle”, which was inspired by moments from season 4. Luckily for us here at Outlander Homepage, Allie agreed to talk to us about its creation. 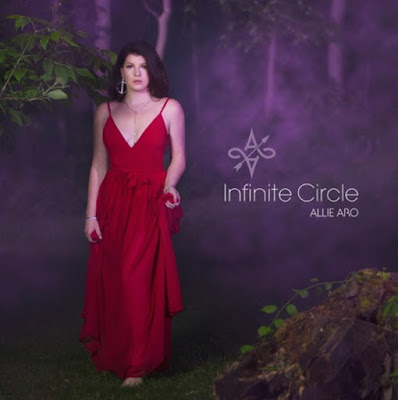 We began by asking Allie a little bit about herself.

“I have been singing my whole life,” Allie told us, “but around the age of 10, I picked up the guitar and could not put it down. I found myself naturally loving to perform in front of people and started to write songs about what I took away from experiences, whether I was directly involved or not. I wanted to emotionally own my songs, so I used writing as a way to cope and understand things around me. The first song I wrote, “Last Goodbye”, was based on a horrible shooting tragedy that occurred at Sandy Hook Elementary School in Newtown, Connecticut.  I wrote it because I needed those children to be able to say goodbye to their loved ones.

At the age of 13, I started to take the business a little more seriously and started opening for bands in the Midwest region of the United States. Then, when I turned 15, I began traveling down to Nashville, Tennessee, to write with hit songwriters, take publishing meetings, and record my very first album under “Allie Louise”.

Over the course of this journey, I’ve evolved and matured in my creative process and have now discovered the sound that I always wanted my music to have. So, at 20, I have rebranded my stage name to something more fitting: “Allie Aro”. I chose “Aro” because it is part of my original last name and the concepts of family and honour are very important to me. My logo also shows an arrow through a diamond, which represents strength and determination. Coincidentally, those characteristics also represent Claire. You can hear this sound in my latest single “Infinite Circle”.

Knowing that “Infinite Circle” is directly inspired by Outlander, we wondered how Allie come to love the story.

“I discovered Outlander through my boyfriend’s mother,” Allie replied. “One night when I went over to his house, she was watching one of the last episodes of season 4. I was so intrigued that I started watching it right away and was hooked by the storyline. Just like the hook of a song, I couldn’t get it out of my head and I may or may not have watched all 4 seasons in one weekend!  I am now currently on the second book. Before the idea of a song even occurred to me, I started promoting the series to all my friends, family, fans, and anyone willing to listen.”

But it didn’t take long before Allie was inspired to link Outlander to her own music, courtesy of the opening episode from season 4.

“In Episode 1 of Season 4, Stephen Bonnet says ‘ I have always been partial to rings…There’s something about the notion of an infinite circle that fascinates me.’  Claire also opens up the episode talking about how she knows how a circle can affect one’s life or death better than anyone. For some reason, the idea of an “infinite circle” just stuck with me,” Allie explained.  “I thought that it would be so intriguing to make it into a song. When I sat down to write it on the piano, I knew instantly that I wanted to write about Claire and Jamie’s love story. It is so beautiful and breathtaking, but it is also is a challenge to find the right words to describe it.”

We asked Allie to talk us through the process of creating her latest song.

Once I got to our session, I had most of the song already written. I had the melody, the chorus, chords, and some lines for the verses here and there, so it was more about putting the pieces together. The process of writing a song can be different for each individual songwriter, but this process is usually how I write mine. We were able to write the song fairly quickly, which then allowed us to record it that day. I wasn’t actually planning on releasing it, but Doug did such an amazing job with the production and, after playing it live multiple times, it was highly requested.”

So are any more Outlander themed songs on the horizon?

“I am hopeful that there will be more Outlander themed singles,” Allie said. “It is hard to say, because I am currently only on the second book and I know there is so much more that is going to happen with the series. But I don’t doubt that once I watch Season 5 and get farther into the books that something will spark again!”

Finally, we asked Allie what was coming up next for her.

“I have 3 more singles left to release off of my EP “Bring On The Moon,” and then I will be releasing a Christmas song I wrote about my hometown,” Allie replied. “I’ve completed two years of University, but I know in my heart that I want music to be my career. I will be continuing to perform, write and travel to Nashville, Tennessee, so I can pursue my dream. I wrote this song just for me, but found that it touched many others, so my hope is that this song reaches Outlander fans all across the world.  I would love to perform this song live for them and meet people who share my love for this series.

And of course, to get your very own copy of “Infinite Circle”, go to:  https://lnk.to/T1mUBEM

We would like to thank Allie for chatting with us and wish her every success with her future career!

This interview was compiled by Susie Brown, a writer and teacher-librarian who lives in Australia and also loves to sing!

Posted by Outlander Homepage at 8:15 AM No comments: