“Who Is That Woman?” An interview with Lauren Lyle by your Aussie Blogging Lass 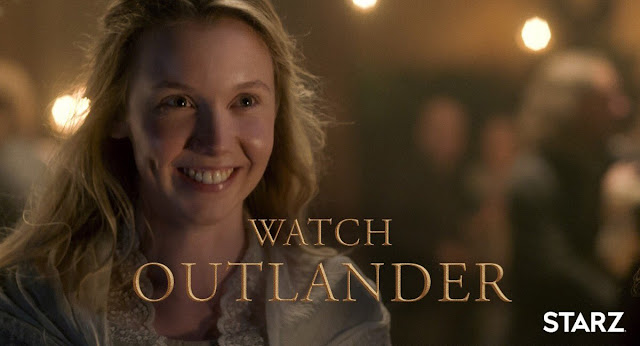 During season 3, Outlander devotees were introduced to the feisty character of Marsali McKimmie. Daughter of Laoghaire, step-daughter to Jamie, handfast (and later wed) to Fergus, Marsali knows her own mind and isn’t afraid to speak it. (In fact, she rather reminds us of everyone’s favourite Sassenach!) But what is it like to portray this independent Scottish lass? Luckily for Outlander Homepage, Lauren Lyle agreed to tell us!

“I lived abroad throughout my life,” she explained, “and it wasn’t until I left school that I decided I wanted to pursue acting as a career. I realised I could really do it when I moved to London. So I began working really hard, trying to meet as many like-minded people as possible. My background is in theatre and my first job was in ‘The Crucible’ at The Old Vic. Having not been to drama school, I decided to train with the National Youth Theatre Rep Company.”

But once her decision was made, the jobs started arrived - and not one at a time, either!

“When I landed ‘Outlander’, I also landed a BBC Drama called ‘Broken’ within the same three weeks,” Lauren said. “It all kicked off from there!”

So how does a typical day on the Outlander set begin?

“With coffee!” Lauren answered. “Then I’m normally first in hair and make up as I’ve got so much hair and we don’t use a wig for me. After that, I’m corseted up and taken down to rehearsals for whatever the scene is that day.”

As fans of the show know, there are no shortage of dramatic scenes to film, but Lauren told us that there is always plenty of fun as well - even with the early starts.

“We normally have a bleary-eyed giggle through and discuss what we want from the scene,” Lauren said. “Then we work fairly non stop until the evening. I love it when there are a group of us in a scene together. Sam and I normally crack up constantly and Cait is such a powerhouse.”

And how would Lauren describe her alter ego?
“Loyal, determined and brave,” she replied.

Since many of Marsali’s scenes take place on board, we asked Lauren what it was like working on the ships - did she find her sea legs, or did she suffer Jamie’s fate?

“The ships were really special,” Lauren said. “It was impossible not to feel a part of the world we were creating when the details of the ships were so intricate. The fact that they functioned with a working crew was incredible too. The crew were so generous at teaching us how to work all the elements on board. As for being seasick, I was initially a bit nauseous but quickly got used to it!”

Shortly after Lauren was cast and photos with her on-screen mother, Nell Hudson, began appearing on social media, many fans commented on the strong physical resemblance between the two women. But did they create a mother-daughter bond as well?

“Nell was the first person from the cast that I met,” Lauren told us. “At the first read through, she was so welcoming and she gave me the whole Outlander lowdown. We immediately got on and we’ve become great friends since. It’s very helpful living down the road from each other as well!”

“Cesar and I have a great bond,” Lauren said. “We work very naturally in tune together. It’s important - and amazing - to have evolved to that point already. We really care how the other one feels about the way the whole Marsali/Fergus relationship is forming. We will always be in discussion about their life. Being good friends and always laughing makes working together the best!”

Finally, we asked Lauren where she would choose to travel to if she could go through the stones herself.

“Probably the end of the 1960s, heading into the start of the 70s,” she answered. “The boom in arts culture and music looked wild. Or then again, perhaps the very beginning of time? I’d take a camera to discover how it all actually began!”

We’d like to thank Lauren for giving up her time to chat with us and wish her lots more laughs and fun times as filming continues!


This interview was conducted by Susie Brown, a teacher librarian and writer who lives in Australia. She can’t wait to see more of Marsali in season 4 and beyond!

Posted by Outlander Homepage at 8:21 PM