Jamie and Claire Fraser have mixed success when their lives cross paths with figures of authority. Their relationship with Colum and Dougal, Laird and War Chief of Clan Mackenzie, was strained to say the least; Major John Grey proved to be a friend; while the less said about the notorious Black Jack Randall, the better. In season 4, the couple will again meet up with authority, in the form of Governor William Tryon, as portrayed by actor Tim Downie. While details of season 4 are still under wraps, we’ll have to wait and see how this relationship turns out, but in the meantime, Tim agreed to talk to Outlander Homepage about his own acting journey. 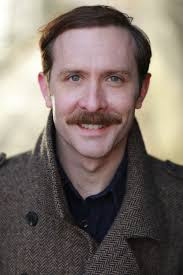 “I’ve always known that I wanted to be an actor, or at least to do something that involved telling stories,” Tim began. “I didn’t enjoy school. I was always the joker, the one that would make up tales, something which didn’t always go down well with teachers. I was immersed in books and in other worlds, which I think helped kick start my imagination. When I was a teenager I did a lot of improvisation classes. They helped me to be much more creative and to push boundaries. At sixteen I left my small village for London and drama school.”

Tim laughed as he recalled a more recent description of his vocation.

“My four year old says all I do is put on silly voices and play dress up,” he said, “which is probably the most accurate description of what I do!”

We wondered if there was a role that stood out amongst the many characters that Tim has played over the years. His choice came, rather surprisingly, from long before he was a well known actor.

“The part I look back on and still think about is the Sheriff of Nottingham in a production of Robin Hood when I was eight,” Tim replied. “I gave him a lisp, which, when you’re eight, is hilarious. I had a pivotal line about arresting Robin and sending him to the tower. But in my haste to be the funny one, I totally messed it up and ended up sending him to a bakery. I have absolutely no idea why a bakery, but Act Two, by rights, should have then started with Robin Hood chained to a wall of brioche and iced buns!”

With such a memorable beginning to his acting career, we wondered what characters Tim would still like to portray.

“I would adore to be in Mervyn Peake’s ‘Gormanghast’,” Tim replied. “I have loved the books ever since my father gave them to me when I left home for drama school. Along with Steerpike, I would love to play Lord Sepulchrave, Titus Groan’s father who goes mad when his beloved library burns down, and comes to believe he is a death-owl who lives in the Tower of Flints. Great stuff!”

Knowing as we do that Outlander is a little short on death-owls, we asked Tim how familiar he was with Diana Gabaldon’s series.

“I have only read the first two books,” Tim admitted, “which were kindly sent to me by @outmander.  I have a lot of reading to catch up on!” 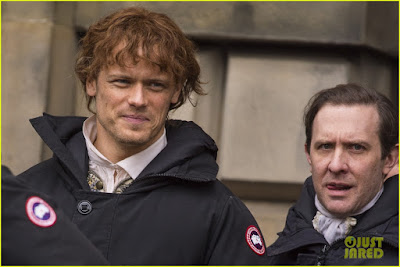 But if he could have his choice of the Outlander cast list, Tim knew what type of character he would choose.

“The baddies are always really fun to play, so I would have to go with the English officers,” he said. “They were just so unbelievably mean and cruel so I think it would be interesting to play that side of things. Also, red goes with my eyes, so it’s a win win really.”

Of course, he was joking, but for those who haven’t seen the colour of Tim’s eyes...
(
“They’re a boring hazel. A warm chestnut, if you will.”

Finally we asked Tim where he would like to go if he could travel through the stones.

“I think that if I could go through the stones, I would want to end up in 12th century Toledo, Spain,” Tim answered. “It was an epicentre of political turmoil, riddles, mystery, sorcerers, alchemy and magic. A melting pot of old Pagan belief mingled with Islamic and Jewish thought. Would be Wizards from all over Europe and the Middle East flocked there to learn the latest in magical theory and practice in the hope that a hidden world of untold knowledge and power would be revealed to them. Wondrous!” 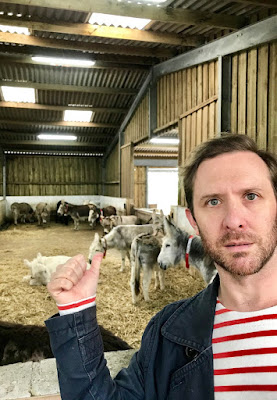 Wondrous indeed. We’d like to thank Tim for sharing his thoughts with us and can’t wait for the first appearance of Governor Tryon later this year.

This interview was conducted by Susie Brown, a writer and teacher-librarian who lives in Australia. She’s not sure why, but she’d rather like to see a death- owl now...

Posted by Outlander Homepage at 2:15 PM