We arrived in New York City on a gorgeous fall afternoon to see everything OUTLANDER.

Starz Fraser’s Ridge exhibit on the Inner Roadway just outside the Javitz Convention Center was an open front cabin decorated to resemble Jamie and Claire’s cabin.  Starz provided fans with an Outlander tote bag, the opportunity to receive specially commissioned oils from Caswell & Massey, apothecaries dating back to the 1700’s in either 1 of 3 formulations (rose water, sandalwood, or Number 6 – a fragrance worn by George Washington) and have a luggage tag stamped with 3 initials. Raffle cards for the day had already been passed out for a chance to win autographs and VIP seating at Hulu Theater for the Outlander Panel on Saturday.  Our Outlander Homepage proprietor, my good friend Dorianne Panich, and I came to see the Ridge prior to her heading to Ron’s Masterclass. It was about 3:30 in the afternoon and the line was around the little cabin. We met friends and chatted on line – it’s what Outlander fans do. A gentleman and his son were ahead of us about to get on the line. The husband asks his teen-aged son who’s carrying a bag of NYCC swag and other goodies, “Should we see what we can get for Mom?” I didn’t hesitate to jump in and tell him of course he should!   A Starz staff member gave all of us waiting 2 copies of EW magazine with the single Jamie and single Claire cover (the third cover is exclusive to Barnes & Noble). 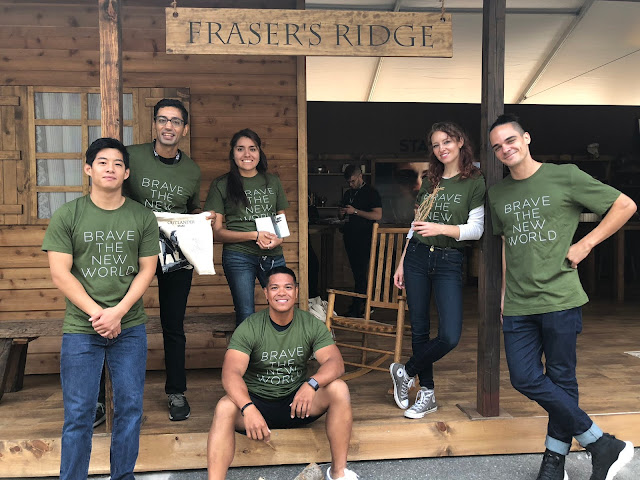 Ron’s Master Class was mediated by Chris Parnell. He talked about his many projects past and present.  This panel was open to those not attending NYCC with a separate ticket. It was off-site. I didn’t attend this saving myself for Paley Fest. 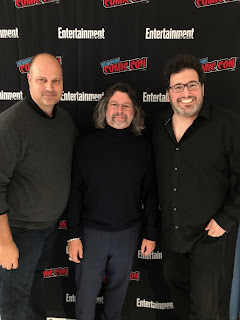 Paley Fest was a moderated panel with Ron D Moore, Maril Davis, and “the core four”  comprised of Sam Heughan, Caitriona Balfe, Richard Rankin, and Sophie Skelton. This sold out event was the first Outlander panel I attended for the weekend.  It just so happened that Paley was in the night before Outlander’s NYCC debut. The thought on everyone’s mind was whether they would show the first episode. Paley Fest did not show it, but showed 2 clips: one featuring Jamie and Claire looking out into the vast wilderness and discussing what America would eventually become and one of Roger and Bree playing The Minister’s Cat while he drives her blue Mustang and they share a wee kiss. 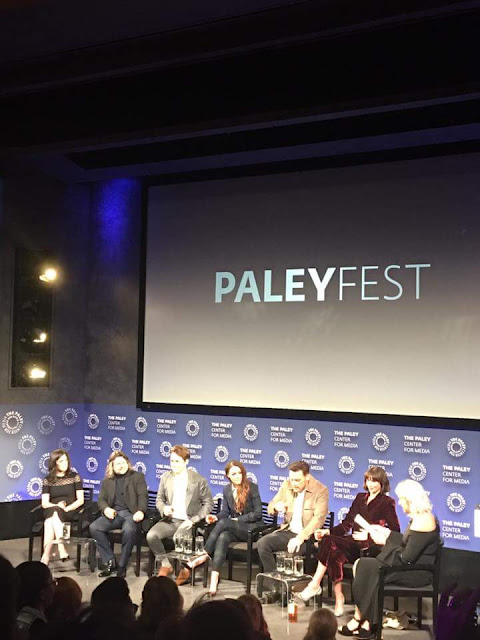 It began with a game of superlatives where the cast were asked to fill in the blanks.  Some examples include: Most Likely to Ruin a Scene Laughing; Richard blamed Sophie, Sam blamed Cait; Most Likely to Fall Asleep: They said Sam; Worst Spoiler Revealer: They named Ron; Most Likely to Complain About Cold: Richard. So it started out light hearted and fun.


It shifted into more serious ground comparing the previous seasons to S4 and turning their Scottish studios and locations into Colonial North Carolina.  A clip was shown of Jamie and Claire looking into the forest and discussing what America will become. Ron addressed this saying they had challenges creatively and in production. They built more visual effects. The previous buildings in Scotland were stone and in America they were wood.  They had to make things new and tackle the new land, new culture and style of storytelling. Ron said, “Audience perception is that is a Scottish show. It is broader. It retains that is Scottish at the core. Everything springs from Jamie and Claire and their roots in the Old World”. Maril added they didn’t do anything to try to replicate or reference the weather. Scotland is Scotland and North Carolina is North Carolina. They didn’t go there.


Asked if their characters carried themselves differently in the new world Caitriona said that people don’t change because of location. They retain where they come from and bridge the gap.  The costumes are different, but Jamie and Claire are Jamie and Claire. Sam added there is great positivity and freedom. They finally get to settle. They build Fraser’s Ridge and can say this is ours.


New love is on the horizon for our newest couple Roger and Brianna. We saw a new clip of Bree riding shotgun while Roger drives her Mustang and they play The Minister’s Cat. They are falling in love and it is new for them both.  Sophie says Bree saw what Claire and Frank had and sent her mother back to be with her father, the love of her life, and has decided she wants a love match. She has essentially become an orphan, transferred to MIT and is in a long distance relationship with Roger.


The baddest bad guy of season 4 is Stephen Bonnet.  They were asked how does the show make him scarier than Black Jack.  Ron simply answered that you don’t compare or compete. You carve out different characters and the path the character takes is a completely different story.  Sam added that Ed Speelers is incredible.


Jamie is reunited with his Mackenzie kin at River Run, the plantation owned by his Aunt Jocasta played by Maria Doyle Kennedy.  Sam and Cait addressed the family reunion. She and Claire butt heads. It is a complex situation where Jamie sees Jocasta as a life line. It is a wonderful moment to introduce his family to her. Claire sees how emotional Jamie is and wants the best.  Seeing slavery is very difficult for Claire and she and Jocasta will never understand each other’s perspectives on it. Cait said, “Claire can’t get past it at all”. Sam added, “Jamie sees it as a poisoned apple”.   Ron clarified that the show plays the story truthfully and it isn’t a platform to make big statements.  They were going to gloss over or romanticize it nor would production make 20th century judgments. The character point of view is not a political statement. Maril added the show depicted it as it was.  To Jocasta it was normal; not bad or good.


First Nation actors from Canada were brought over to film this season.  It was important to use indigenous actors. Maril stated it was an honor for the crew and production to work with them. They helped them learn the culture so they could do things right and sensitively.


The final question was what changed most in approaching Drums of Autumn for season 4. For Maril every season seems harder than the last.  It is always a challenge with the key moments fans are excited about and the pressure to get them right. She thinks they pulled it off. Ron answered finding the balance and rhythm of the show: Roger and Bree, Claire and Jamie, Jocasta. It was a challenge to find it.
Richard listed a few things also. It was tricky:  the change of scenery, fan expectations, evolution of characters – the changes to characters and how they are different at the end of their journey. Sophie told us Bree goes through a lot and she researched it and wanted to do justice to it.  Sam told us Jamie sees elements of all his experience and he gets to draw from it and becomes a laird. Caitriona gave the final response and says she was able to explore a side of Claire she hadn’t before. It is a quieter part of their life; more nurturing. It was a new challenge for her.


On Saturday morning at 11:15 Outlander cast members Sam, Cait, Richard, and Sophie did a 15 minute panel at the Syfy Wire NYCC Live Stage.  By 10:30 all the seats were taken and the crowd was 6 people deep! I wish I could tell you what was said. I couldn’t take notes because I was packed in like a sardine. There were speakers blaring and many of the same questions that were asked at Paley Fest and in interviews leading up to S4 were asked. There is a link available to watch the 15 minute interview.  All in all in wasn’t very newsworthy, but it is always nice to see the rapport and friendship between the actors. 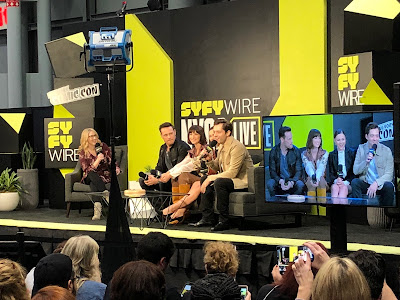 The main NYCC event was the Outlander Panel held at the Hulu Theater at Madison Square Garden.  We arrived early, got into our seats, and to our surprise a woman who requires no introduction, Diana Gabaldon, came out on stage to rousing applause and cheers from the audience.  She told us she has seen the whole season and it is very good. Then she announced they were showing us the first episode!!! Happy day!! I truly enjoyed the first episode. I don’t wish to spoil it for anyone.  It covers a lot of ground. Parts are very recognizable from the book and other parts were tweaked. The hour went by so quickly. They always do when you get lost in the story. There was a half hour panel after that covered some of the same ground as the previous two panels.  There were also a few fan questions at the very end. (Outlander Homepage never got to add our Twitter relayed questions from fans, to the cast panel that we had asked for in previous weeks... The Madison Square Garden management was very unorganized working as they usually do with a concert forum instead of how NYCC actually works!) 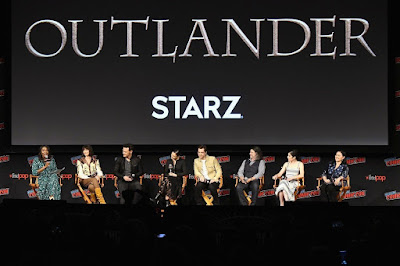 Diana Gabaldon participated in a panel “Pictures and Pages” on Sunday morning. The premise was authors talking about their work being adapted to television and movies.  Diana said that the characters are their dialogue. She has said for years that she sees all the dailies and will make suggestions when she sees discrepancies. She will email them and they don’t always agree with each other 100%, but they have a respectful relationship.   Diana wasn’t specific about which episode or which season it was in, but there was only one time where she told them it would never happen like that. She again said she has seen all of season 4 and likes it very much. The moderator asked if people should read the books first or watch the series first.  She responded they should watch first. There is no way the show can include all the details and put everything that is in the books into the show. Reading first might cause disappointment. You can always go back and read the book and enjoy them both.

Then Diana was brought back to the Javitz Center, the panel was at a different location, where she signed autographs for Random House. She is absolutely lovely. People were able to receive two autographs and take pictures. 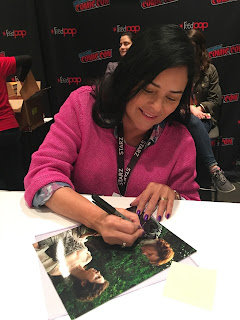 It was an exhausting weekend, but in a good way. So much was packed into too few hours. As always the friends in the fandom that we meet up with on lines, in passing, and in the audience is a gift. Outlander, the books and show, has given me a community. I am so happy to be in this clan.

Until next time, clanmily I wish you peace, love, and Outlander.
Laura Martin
Outlander Homepage Contributor

Posted by Outlander Homepage at 8:34 AM