A Gathering with Herself 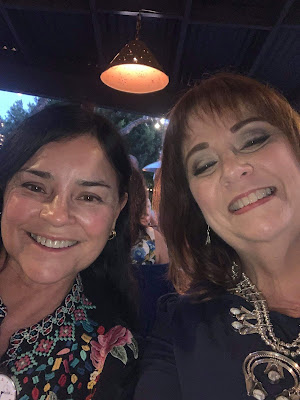 Every avid reader has a favorite author. Yet while reading, re-reading or languidly perusing the dogeared pages of those beloved books, one rarely thinks about meeting the person who wrote the words that mean so much. At least, I never did... until two weeks ago.

I love to write, and have imagined myself to one day be a famous best selling novelist, but more than anything, I just enjoy creating stories, characters, and putting it all down on paper. I've never really had much confidence in my writing. I never gave it the merit it deserves, always treating the talent I've been told I have, as a hobby or whimsy. Until I discovered the Outlander novel series, I had mostly thought of my writing as a waste of time, equivalent to spending hours scrolling social media.
As I devoured each of Diana's epic tomes, I became more and more inspired by her and what she'd accomplished with a story line, that basically began with her admiring a kilted actor in a Dr. Who episode.  So, when I was offered the opportunity to meet my literary hero in person, only death itself was going to keep me from it! Lucky for me, my husband and biggest fan, decided to turn the planned event in Diana's hometown of Scottsdale Arizona, into the vacation of a lifetime.

Before I go any further, I have to say thank you to Dorianne Panich, who brought me into the Outlander Homepage family, and through her brilliance, chutzpah and dedication, I've been able to be a part of something so special and amazing, it's almost surreal. Not only have I enjoyed bucket list experiences because of Dorianne, I've also made a true friend, who has connected me to others I call friend as well.  While it seems the majority of the Outlander fandom is focused on the television series, let's not forget it all started with Diana's novel series. Every Outlander fan owes gratitude to those eight books, and the woman who penned them. 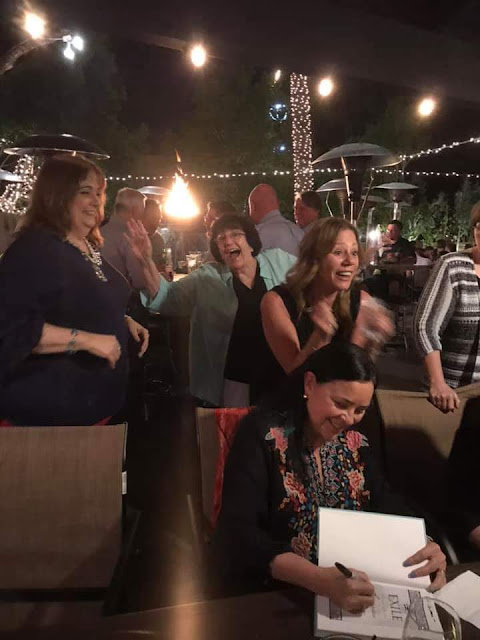 The weekend began with a meet and greet dinner at the hotel on the Friday night, prior to the event, and the camaraderie was instant. It was so great to see friendly faces from previous events again, and put faces with names of those only known through social media. It felt like a family reunion as folks caught up with old friends, discovered new ones, and of course dished about everyone's favorite topic... Outlander! The husbands all hit it off, and it was really nice to just kick back after a long day of traveling and relax with such a diverse, interesting group of people. It was the perfect ending to a stressful day and the perfect start of a most amazing weekend.

Now, if you've ever organized or planned a major event of any size, you must know that something can and will go wrong. It's just how life works. But, I can honestly say that in spite of a few glitches, the evening went beautifully. The event Gods were smiling down on us. The weather was perfect, the restaurant staff was very accommodating, everyone was happy and excited. The anticipation was palpable, and when Diana Gabaldon walked in I think everyone there pinched themselves to make sure it was really happening. I know I did! I think Diana Gabaldon is the first person I've ever seen light up a room...outside! She just glows with a radiant, welcoming spirit that instantly puts you at ease. I didn't exactly fangirl, but I did have an inner squee moment that thankfully passed quickly.

Dorianne and I worked out logistics with the help of Roma Sars, and made sure each person at both tables got to spend time talking to Diana.  When I got my chance, I had to mentally collect myself, gather my wits, because I had so many questions about random topics. How to not be overly sensitive and possessive over my work, screen writing compared to novel writing, character building, the book posts I have planned for droughtlander on the homepage, what kind of plant is this, how do you figure out what character to kill off, and how they die, methods for remembering plot twists that come into play later into the story, her favorite character, books...my mind was a mad ramble! I just wanted to pick her brain for every morsel of literary advice, and knowledge. I prayed I wouldn't simply sit, stare, and drool like a brainless idiot. Through some divine intervention I was coherent, although, considering the noise level in the place coherent is a questionable term. Diana, if you are reading this and I screeched in your ear, I sincerely apologize. Anyway, we had a nice chat, and she answered my rapid fire questions, as I babbled them off out of fear of taking more than my share of her time.

Diana and I both agree, that screen writing is not to our liking.  I have taken a screenwriting class, and she of course has written an episode for the show.  It's all dialogue, and action, and removes the pleasure in painting a picture through words that is novel writing. I also asked her if she had a favorite character, which in afterthought is probably a tough question considering all the complex people that populate all eight novels. She graciously replied her favorite character is whoever's head she is in at the moment, and earlier in the day, she and Claire had spent some time together. Her favorite novel is whichever one she is currently working on, which makes sense to me, as I understand the excitement in crafting something new, so "Bees" is it.

I also told her about the articles I was planning for the current droughtlander, focusing on her books. I explained that it's the Homepage's goal to lure more fans to read the books.  Diana smiled knowingly as I recounted the first piece posted about Frank, and how he is still very relevant, albeit posthumously.  She heartily agreed, which just tickle me to death. As I began to wrap up my visit with her, I told her how much her books have meant to me, and to others, particularly during hard times. I thanked her for her amazing legacy appreciated by millions worldwide.

On a final note, I confided when I have writers block, or doubt my literary ability, I pick up one of her novels, and immerse myself in the characters she has given such 3-D humanity, in hopes of perhaps mastering the same art. Diana Gabaldon then said the nicest, most sincerely encouraging thing I will never forget, "Of course you can do that."  Diana Gabaldon is one of the most gracious, attentive, intelligent, and interesting people I've ever met. Warm, funny, completely devoid of pretense, always poised, and very personable, she is the epitome of grace, and class. Meeting my literary hero was everything, and more, than I ever imagined in my wildest dreams. 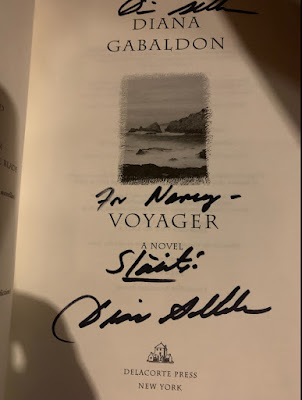 Lastly, I have got to dedicate a few sentences to Diana's home state, which is a geological wonder. I was dumbfounded by the lushness of the desert, and immediately fell in love with the landscape, especially in Scottsdale/Phoenix. The towering Saguaro, silvery sage brush, bougainvillea, mesquite, prickly pear, plus numerous other cacti, all interspersed with pink and white flowering trees, was just incredible. Later in the trip, as we traveled north to Flagstaff, (Diana's home turf) the cacti turned into mountain forests of Ponderosa Pine, hemlocks, and fields of wildflowers, all blended into a backdrop of rocks that are just as colorful, and often prettier than all the plant life itself! My husband Pete, actually told Diana he loved the local landscape so much, he was going to gravel the backyard, and make his own desert oasis. He even offered to cook her his famous gumbo, should she ever visit Baton Rouge. Of course, that is fodder for a whole other story! 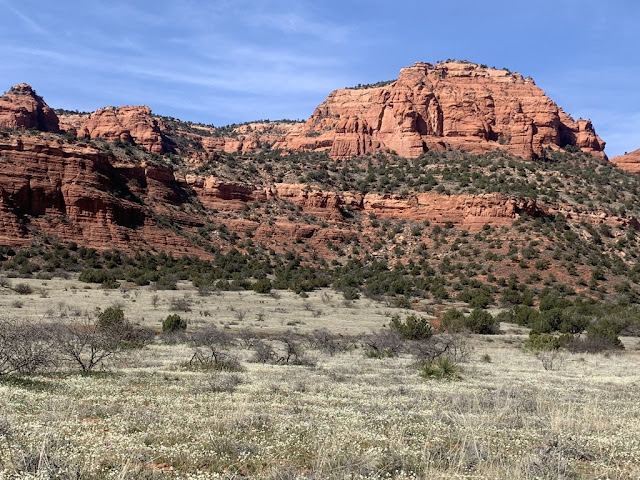 Posted by Outlander Homepage at 10:46 AM