WORLD OUTLANDER DAY IS JUNE 1ST!
In honor of this we are doing a giveaway
3 lucky winners will recieve
the Outlander season four dvd, with all the featurettes
Open to fans in the UK ONLY.....

Our Giveaway Rules:
If you're on twitter, follow us and retweet our raffle post. If you're on Facebook, join our page and like our raffle post. (Make sure it's Outlander Homepage) Your account will automatically be entered into our raffle application. 3 names will be picked as recipients, 'winners' on June 1st 2019. The prize will be shipped by the PR firm DnA, representing Sony Pictures Home UK. 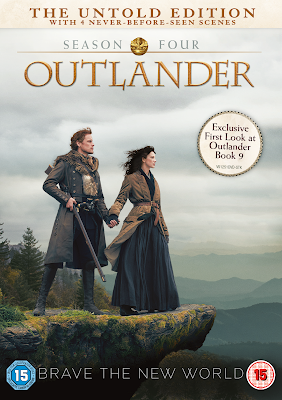 About the season 4 DVD, which is available now on Amazon!


Finally reunited, Claire and Jamie’s epic time-traveling love story continues when OUTLANDER: SEASON FOUR debuts on Blu-ray™ and DVD. Based upon Drums of Autumn, the fourth of eight books in Diana Gabaldon’s international best-selling Outlander literary series, OUTLANDER: SEASON FOUR sees Claire (Caitriona Balfe in her Golden Globe®-nominated role) and Jamie (Sam Heughan) trying to make a home for themselves in Colonial America on the cusp of the American Revolution after being shipwrecked on their way back to Scotland. 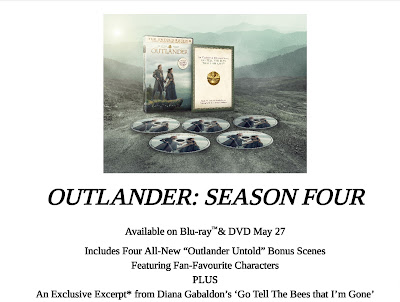 OUTLANDER: SEASON FOUR contains all 13 episodes in five-disc Blu-ray and DVD sets, along with four additional “Outlander Untold” scenes and an exclusive excerpt* from Diana Gabaldon’s 9th instalment in the Outlander book series which is yet to be released.

“Outlander Untold” features four all-new scenes allowing viewers to dive deeper into Lord John Grey’s life as a single father to William, Murtagh and Marsali navigating a confrontation with deceitful landlords; Young Ian meeting Rollo for the first time; and Aunt Jocasta teaching Phaedre & Lizzie a valuable lesson about working together. In “Here in the New World,” the cast and crew take a look at the new cultures, costumes, social rituals and homes this season; Caitriona and Sam along with the cast and crew reflect on their favorite moments from the last four seasons in “Nothing is Lost: A Look Back;” and “Training Rollo” has John Bell and Animal Wrangler David Stewart taking viewers through some of the training they did with Rollo, the wolf. There’s also an exclusive excerpt*, available as a booklet with the DVD only, from author Diana Gabaldon’s 9th book in the Outlander series, ‘Go Tell The Bees that I’m Gone’, which is yet to be published.

Synopsis:
Season Four of “Outlander” continues the story of time-traveling 20th century doctor Claire Fraser and her 18th century Highlander husband Jamie Fraser, as they try to make a home for themselves in colonial America. As Claire and Jamie build their lives together in the rough and dangerous back country of North Carolina, they must negotiate a tenuous loyalty to the current British ruling class, despite Claire’s knowledge of the American Revolution to come. Along the way, the Frasers cross paths with notorious pirate and smuggler Stephen Bonnet in a fateful meeting that will come back to haunt the Fraser family. Meanwhile in the 20th century, things are complicated between Brianna Randall, Claire and Jamie’s daughter, and Roger Wakefield, the historian who helped Claire search for Jamie in the past. But when Roger and Brianna search for proof that Brianna’s parents reunited in the 18th century, a shocking discovery makes both of them consider following in Claire’s footsteps. 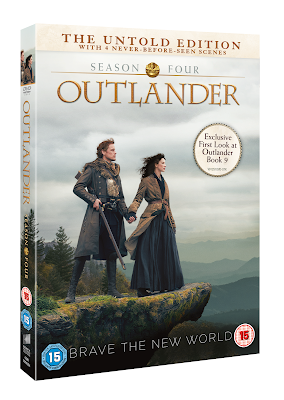 Outlander Untold: Episode 12 Bonus Scene: Tea for Two
Outlander Untold: Through the Stones
Here in the New World
People of Worth: The Frasers
Nothing is Lost: A Look Back
Gag Reel
Deleted and Extended Scenes with Introductions by Executive Producer Ronald D. Moore
Writer & Producer Commentaries
Training Rollo


*DVD Only:
An Exclusive Excerpt from Diana Gabaldon’s 9th book in the series is available as a booklet with the DVD only *while stocks last.

Buy the DVD on Amazon
https://www.amazon.com/Outlander-Season-Blu-ray-Sam-Heughan/dp/B07N3W89X3

The Bear McCreary soundtrack for Outlander is also out buy or listen here! 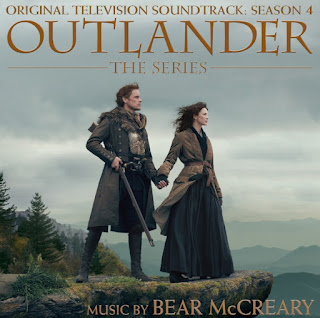 Posted by Outlander Homepage at 10:22 AM