There is no doubt that the beating heart of Outlander is the amazing characters created by Diana Gabaldon. Millions of people all over the world have come to love the Frasers and have lost themselves in the epic story. But while readers can happily bask in an author’s descriptions of people and places, when a show is brought to the screen other experts also play a vital part in bringing these elements to life. Fortunately for Outlander fans, the person in charge of recreating the settings since day 1 has been the very talented Jon Gary Steele. And equally fortunately for Outlander Homepage fans, he graciously agreed to chat to us about his journey.

We began our interview by asking Jon Gary to go back to the beginning, to tell us a bit about his training and how he got into the world of design.

“I was born in Los Angeles California, but I was raised in Farmington which is 2 minutes away from Fayetteville, Arkansas,” Jon Gary said. “I studied architecture at Fayetteville because they have one of the best schools of architecture in the South. It was a five year program, but half way through I noticed that a mini-series called ‘The Blue and the Gray’ was being filmed in our home town and in the surrounding areas of Arkansas. I saw how the film company was taking lots of old buildings and streets and changing them to look period correct and to fit what they needed to tell the civil war story. I thought, ‘That looks so damn interesting!’ I decided right then that I wanted to work in film & TV!”

But this wasn’t a decision that met with universal approval at home, as Jon Gary explained.

“My mom, who was a force of nature, said ‘Oh no you’re not!’ We argued for several days and finally came to a compromise. I would finish my major in Architecture and minor in Film and Television.”

So, once the study was over, we wondered where Jon Gary began his career.

“My first real design job was as Art Director on a soap opera called ‘Capitol’, he said. “Then a year or so later, the Production Designer left and I took over. A few years after that, I went into features. My favorite features to work on were “American History X”, "Cruel Intentions” and “Burlesque”.

When asked which designers have inspired him, Jon Gary turned to the world of film for his answer.

“One of my favorite production designers was Ferdinando Scarfiotti who designed “The Last Emperor,” he said.  “It is still one of my favorite feature films. I also loved Eugenio Zanetti, who won the Oscar for ‘What Dreams May come’ and ‘Restoration’. He is one of the most brilliant people I have ever met!”

Currently, of course, Jon Gary is a vital part of the Outlander team. Now in the thick of season 5, he describes working on Outlander as “an amazing adventure” so we asked him how that adventure first came about.

“Terry Dresbach, our costume designer for season 1- 4, has been one of my best friends for decades,” Jon Gary told us. “We both had always wanted to do a period film or TV show.  It is always hard to get those jobs because productions always want to hire someone who has designed period films before. But Ron Moore hired Terry and I to do an electronic ‘Look Book’ to take to his pitch meeting with Sony & Starz. We had a blast doing tons of research and had many meetings with Ron about the direction he wanted to take the show.  A month later I was in Scotland scouting locations - and then a month or so after that Terry and I were both over here prepping the first season of Outlander!” 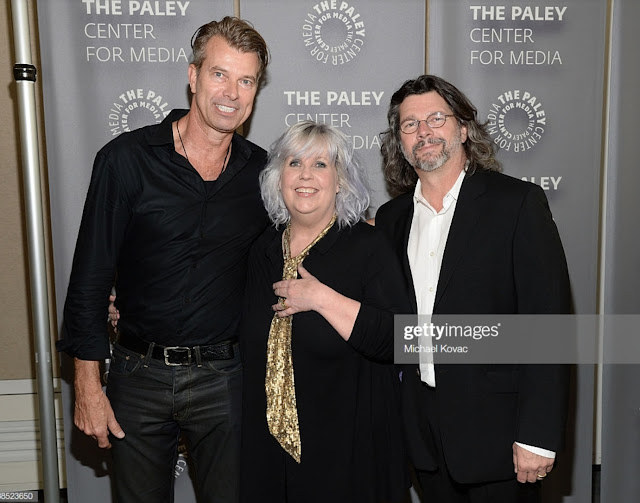 And since that first season?

“It has been wonderful because we get to design and build tons of huge beautiful sets every season,” Jon Gary enthused.  “I have now been here in Scotland for over six years with a month or so off after each season. It does sound glamorous and all but it’s really hard work!!! The work level never ever slows down!”

“At around the half way point each season we start prepping the designs, sketches, drawings, illustrations, models for the next one,” Jon Gary told us. “That way it gives us a jump on the next season because we always need more time to get everything done.”

As for the team around him, Jon Gary has nothing but praise.

“We have amazing crew in the Art and Set departments,” he said. “The construction, paint, plaster, props and set dressing department all do a brilliant job. It’s a very big show and everyone works extremely hard to make the show look like it does. They all love doing it or they wouldn’t stay!”

When asked if he had a favourite set, Jon Gary listed his choices by season.

“In season 1, it was the Great Hall and Gellis’s attic space, while in season 2, it was Jamie & Claire’s Paris apartment, the Paris Apothecary and the Star Chamber,” he said. “In season 3, I loved Jamie’s Print Shop and the Claire & Frank Boston Apartment. Last season, my favourites were the River Run plantation - both interior and exterior - Jamie and Claire’s cabin and the Indian village.”


And is there a front runner favourite for season 5?

Not that we really want to think about it, but we asked Jon Gary what he would like to do after Outlander.

“What would I like to do next?” he asked. “Something fantastical like Lord of the Rings or American Gods! Let's see what the Universe brings!”

Whatever it is, we know that it will be brilliantly designed. We’d like to thank Jon Gary for being so generous with his time in answering our questions. We can’t wait to see what design delights season 5 has in store!

This interview was compiled by Susie Brown, a writer and teacher librarian who lives in Australia. She secretly wishes she could get a peek at that original electronic look book!


Posted by Outlander Homepage at 8:46 AM