While everyone is still reeling from the season five finale of the STARZ hit series Outlander, Outlander Homepage enjoyed a brief chat with another handsome man of Fraser’s Ridge, new cast member, Jon Tarcy. Jon plays Isaiah Morton, who finds himself a target of those dastardly Brown’s. Pour yourself a wee nip of something, find a cozy spot, and join us as we get to know Jon Tarcy. 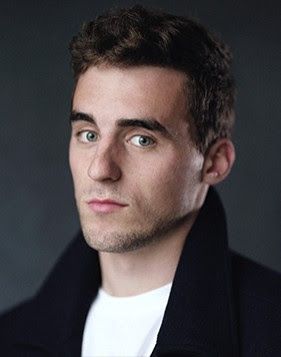 Outlander Homepage:  Thank you so much for chatting with us, Jon! Isaiah Morton’s story line is one of my personal favorites from the novel, The Fiery Cross, which season five is based on.  Please tell us a little bit about yourself. How did you get into acting? Also, please share with us how you landed the role of Isaiah Morton?

Jon Tarcy: I guess it all started when I was about 4 or 5 and I used to perform little shows in my living room for my parents. The shows varied from singing recitals, to dance extravaganzas and even magic shows! I used to recruit my younger sister, who was only 2 at the time, to be my assistant (or backing dancer). Like most children, I loved to make up stories and pretend to be different things/people, then I think it just became something that I wanted to keep on doing in any capacity. As I got older, I took part in lots of school plays, joined the National Youth Theatre and the National Youth Music Theatre. Then headed off to Drama School.

In terms of Isaiah Morton, my agent organized for me to send in a tape for the role and then I went to meet the casting director Suzanne Smith for a second round audition. A few weeks later I heard I got the part and I was beyond delighted! 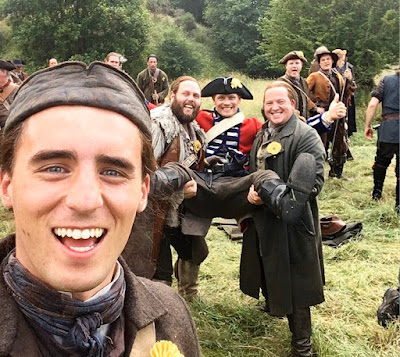 OH: Well, Outlander fans are equally delighted to have you join the show! You’ve performed in numerous stage productions. Joining the cast of such an epic production as Outlander must have been somewhat of a culture shock. What has it been like for you? Can you share some memorable moments or experiences on set with us?

JT: It’s been an incredible experience to be part of this show. The whole team on Outlander were so welcoming to me, so any nerves I had at the start were quickly put to bed. I’d had a few TV jobs immediately after I left drama school but over the last few years I’ve done more stage work, so it was really exciting to be back on set and remind myself of the old “less is more” motto.

There are so many memorable moments! I think the scene in Episode 1 when Jamie lights the cross was quite a unique one. It was the first “night shoot” of the season, so I decided it would be a good idea to try and stay up the night before and sleep during the day to allow my body clock to get more in sync. Unfortunately, I then couldn’t get to sleep during the day, so by the time we’d finished shooting the scene at 6 AM, I’d been awake for nearing 48 hours! Let’s just say I’ve learnt my lesson! 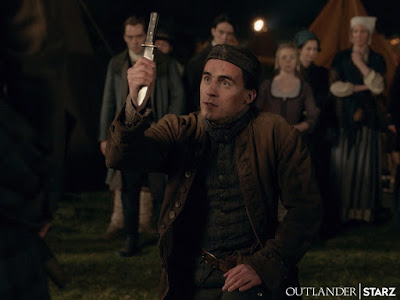 OH:  Ah yes, what’s that old adage…“what sounds good in theory…?”  I’ve also heard those night shoots can be brutal. The cast and crew must go through gallons of coffee! Your character, Isaiah Morton is one of Jamie’s men and is always right in the thick of action with the militia. Have you had to learn any stunts, or do any stunt work?

JT: I had to learn how to ride a horse. I’d only ever ridden a donkey on a beach before, so I had a lot to learn. The team on Outlander that look after the horses are fantastic – Matt, Ollie, Leia, to name a few. They took me through it step by step, so that when I had to ride on set I felt relaxed, ready.  One interesting stunt that my character had to do was fall backwards off a horse in Episode 4. Thankfully though, it wasn’t me that had to fall off, but a very brave stuntman named Matt Crook. He took quite a hit!

OH:  Ouch! Thank goodness for stunt doubles! Judging by his description in the novel, Isaiah Morton is the farthest thing from a philandering Romeo, yet your character gets himself into quite the romantic tangle with young Alicia Brown and her irate family. The Brown's actually try to kill him!. If you could offer Isaiah Morton some relationship advice, what would you tell him? 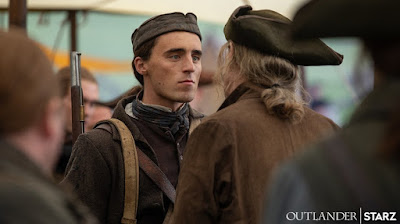 JT: Ha! Good question! I think I would say that honesty is always the best policy. If you’re honest from the outset, you avoid complications down the line. Saying that, I think the Browns would have caused problems for Isaiah whatever he’d done!

OH: Oh no doubt about it! Those Brown's are a treacherous lot, indeed!  We like to ask all the cast members that we interview this last question: If you could travel through the stones, what time period would you go to, and why?

JT: Hmm… I’d probably like to go back to Shakespeare’s England – to meet the big man himself, maybe get myself in one of his plays, and catch a glimpse of Elizabeth the I in the crowd!

Posted by Outlander Homepage at 6:45 AM