Variety talks to Sam Heughan and Caitriona Balfe about Season 3!


This article has been updated from original, right after the season finale... 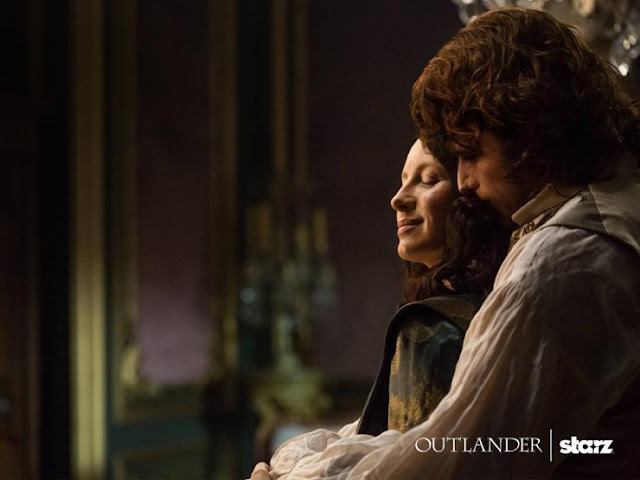 
For the full article
http://variety.com/2016/tv/news/outlander-season-3-spoilers-claire-jamie-reunion-voyager-black-jack-randall-1201811811/


Season 2 of “Outlander” began with a disoriented Claire Fraser (Caitriona Balfe) returning through the standing stones at Craigh na Dun, alone and pregnant, to reluctantly reunite with her first husband, Frank (Tobias Menzies) in 1948. In the premiere, we saw Claire and Frank negotiating how they might raise a child together, with their relationship irrevocably strained by the events of Claire’s absence and the man she fell in love with during that time away.

Sunday’s finale, titled “Dragonfly in Amber,” showed us the harrowing moments leading up to that reunion, as Claire’s second husband, Jamie (Sam Heughan) convinced her to return to her own time in order to protect her and their unborn child, since he believed that he was destined to die with his men at the Battle of Culloden.

That seemed like the end of Claire and Jamie’s story (although fans of Diana Gabaldon’s novels already knew that there’s plenty more of this tale to be told, with eight books currently published and more to come — not to mention the fact that the show was already renewed for season 3 and season 4), until Claire discovered that Jamie survived both Culloden and the execution of Jacobite soldiers that followed the battle, meaning that there was a chance they could still reunite if she went back through the stones — albeit after 20 years apart.

Given the number of books in Gabaldon’s series (and the fact that viewers would probably riot if Sam Heughan suddenly disappeared from the show), it’s not much of a spoiler to say that Claire and Jamie will someday find each other again. “There’s a lot of challenges to season 3 — there’s a period of time where Jamie and Claire are apart; he thinks that he’s lost her, or at least that she’s alive and well but in the future, so what is he living for? What sort of man is he now?” Heughan observes. “She will eventually return, but they’re both older, so what is Jamie, who is the man he’s become” in the time since they last saw each other?

Those questions — “who is Jamie without Claire, why is he still surviving, what has he got to live for when he’s lost the woman that he loves” — will be central to the character in season 3, according to Heughan.

And therein lies both the tragedy and romance at the heart of the “Outlander” series, which, despite its genre-bending sensibilities, incisively explores the sometimes harsh realities of a lasting relationship, with all the triumphs, complications, joys and heartbreaks that go along with it. When they find their way back together after decades spent separated, Claire and Jamie will have to relearn what it means to be a couple, something that Balfe admits she’s eagerly anticipating in season 3.

“I think what’s going to be most exciting is the reunion between Claire and Jamie and them discovering each other again and falling in love all over again,” she tells Variety. “I think both of them have probably held each other up on a pedestal for 20 years, so in many ways, they’re going to have to destroy that image first before they can fall in love with the person right in front of them, and that’s going to be really interesting. I love the complexity of that, because you can’t be in love with a ghost, and Claire is in many ways in love with Jamie’s ghost, as Jamie is in love with her ghost, and that’s not the people they are when they see each other again.”

The season 2 finale may have jumped ahead in time to introduce us to Claire and Jamie’s daughter, Brianna, on the cusp of adulthood, but we still have 20 years of lost time to revisit, and the show isn’t likely to skip over all of it, especially since those life experiences will inevitably have shaped who Claire and Jamie are now that they’re middle-aged.

“What I’m so excited about as well next season is we’ll see, hopefully, some of her progression as a mother,” Balfe says. “So even though we’ve jumped forward in episode 13 [to see Claire] at 50, hopefully we’ll see some of that journey between late 20s and 50.”

While the actors had yet to read scripts for season 3 when they spoke to Varietybefore the finale aired, Gabaldon’s “Voyager” gives us some hints as to what we might see in the new season, including a final showdown between Jamie and Menzies’ Black Jack Randall, who was destined to die on Culloden Moor.

“If you’ve read the books you will know that Randall will appear again,” Heughan teases. “I know that Diana has written the scene of how they ended up [back together], so hopefully – and who knows, I haven’t read the script yet, but hopefully, we’ll get to see Jamie and Randall in the Battle of Culloden.”

We’re also likely to see Frank again, to give viewers a sense of the realities of his relationship with Claire. We know from some of Brianna’s comments in the finale that her parents’ marriage wasn’t particularly idyllic in its later years, and Menzies confirms that the tentative plan is for season 3 to explore the couple’s dynamic following the move to Boston, including “the disintegration of their marriage out there… it’s slightly ‘Who’s Afraid of Virginia Woolf’ in Boston, which hopefully will be really exciting stuff to dig into.”

Balfe agrees, “The relationship between Claire and Frank is so rich and complex, I’m really looking forward to that.”

After the political intrigue of this season, Heughan says season 3 “feels like a very new chapter,” with trips to tropical climates that are far removed from the chill of Scotland. “There’s a lot of travel involved, and I think that’s the joy of the show — it’s never the same thing, it’s constantly moving, so next season should be quite an adventure.”