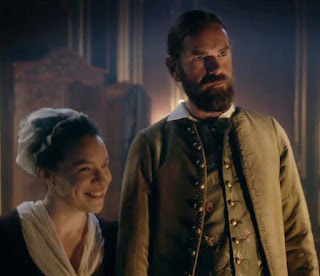 Outlander fans might swoon over Jamie Fraser, but his irresistible godfather Murtagh Fitzgibbons Fraser, has fast become popular with the ladies, especially as his love life heated up with a pretty French house maid in season two of the Starz series.
Vive Les Frasers!

Who is the actress lucky enough to play Suzette, opposite fan favorite Duncan Lacroix? Well, the lovely French-born, Adrienne-Marie Zitt, isn't just lucky, she is smart, multi-talented, charmingly quirky, endearingly down to earth and was kind enough to give Outlander HomePage and our followers, a chance to get to know her better.


Outlander Home Page (OHP): When in your life did you realize entertainment (acting, singing, writing, yep, she can do it all!) was your calling?

Adrienne-Marie Zitt (AMZ): To be honest, I have always been attracted to creative endeavors. The first "job" I ever wanted to was circus horsewoman after I saw the women in sparkly costumes doing acrobatics on the horses backs when I was about 4 years old. Then, by age 10, I was directing, writing, and acting in my own plays in the schoolyard (as well as singing in the school choir), casting my friends and (probably entirely baffled) random children in the playground! My big hit was a play called "The Misadventures of the Sun King" and involved Louis the 14th, a crown, a pulley system, and a teddy bear. Big success!

Well that playground perseverance paid off! Adrienne-Marie charmed Outlander fans in her portrayal of the Fraser's house maid Suzette. Her character also charmed the scowl right off of Murtagh.


OHP: Your "love scene" with Duncan Lacroix was fantastic! How hard was that scene to shoot? Surely that scenario created a few out takes.

AMZ: Aaaah, the famous "love" scene with Duncan. It was actually a pretty quick scene to shoot. Caitriona wasn't there that day so it was just those shots of Duncan and me, and that one line. We did about 5 or 6 takes I think, mostly because Metin wanted me to bow before I said my line, and I kept forgetting (possibly because I was on my first TV shoot, topless, and straddling a man I'd only met on a couple of occasions. I will always remember looking down at Duncan under the sheets thinking... This is SURREAL...) I just especially remember afterwards, it had really felt like a bonding experience for both of us. We were both very nervous about it. 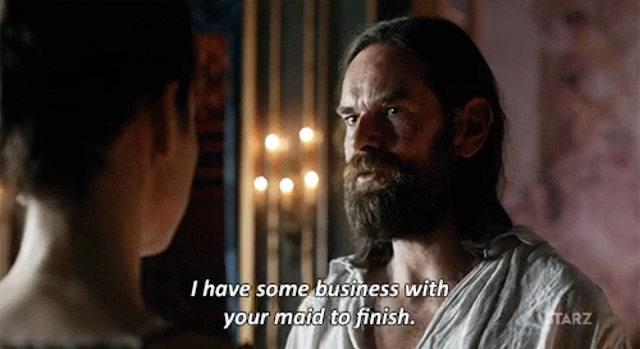 I think most Outlander fans will agree, that was one of the season's favorite scenes.


OHP: You've done both camera, and stage work. Which one do you find more challenging? Is there a specific aspect, or element of the industry that is your true passion?

AMZ: By far I have found the camera work much more challenging, but that is possibly because my experience in TV is limited to... Outlander! Whereas I have decades of experience in stage work, and the bulk of my training was theatre-based. It's a very different process, usually much slower, you get to really know your cast mates, you rehearse a lot, you have a lot of time to explore... TV, at least the Outlander experience, struck me by its very different rhythm, and the amount of technical things you have to keep in mind. I can't believe it now, watching my few seconds of chasing after Caitriona on the stairs, how many technical notes there were on that simple move. With theatre you don't really contend with technical stuff until the very last days before opening night. So, I'd say so far I cherish the theatre process, but I'd love to expand my TV experience, just for fun.

Well, Outlander fans certainly enjoyed your TV experience, and hope you get the chance to expand your television appearances.


OHP: If you could play the lead role in a remake of any classic film, which one would you choose, and who would you want as your leading man?

AMZ: Ooooh that's tricky! Very tricky! My first thought was Scarlet O'Hara on "Gone With the Wind", because it's such a kick-ass female role, the likes of which are seldom seen nowadays. Here's a woman who's beautifully flawed, a bit of a villain, but not in a simple way. But, you know, Scarlet is really Vivian Leigh, it's difficult to imagine stepping into that! If I got to do it, just for fun, I'd choose Richard Armitage as my leading man, since I couldn't have Clark Gable....

Hey, we knew from her role as Suzette this lady has excellent taste when it comes to leading men!


OHP: Where/when will we get to enjoy your talents again? What upcoming projects are you working on?

AMZ: Well, for the moment, my projects are either writing or theatre directing based. I'm in touch with a small theatre company whose scripts I have really liked, very female-focused, strong, little known stories. I may be acting with them at some point soon, so I'll keep you posted on that. It would be quite an exciting part. I also have quite a few songs to record! So as per usual - I"m back to what I was doing at age 10.

What she was doing then, certainly seems to be working well for this hard working, gracious actress now.


Outlander Home Page really enjoyed talking to Adrienne-Marie Zitt, and wish her all the best as we look forward to seeing more of her on stage and screen. 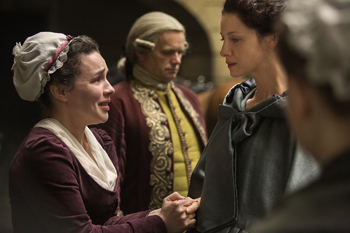 Posted by Outlander Homepage at 2:32 PM