Plus, what it feels like to have women camping out to meet him.

There are few things in this world that grown women are willing to camp out for: the arrival of a royal baby, Beyoncé, probably, Hamilton tickets, in its Lin Manuel-Miranda heyday. After last week, add Outlander actor Sam Heughan to the list.

In New York on a quick break from shooting season three of the Starz show that some have called a feminist alternative to Game of Thrones, Heughan announced he was doing an appearance at the uptown Barbour store, and the first 20 in line would have the opportunity to take photos with the actor.


People started lining up the night before the event. 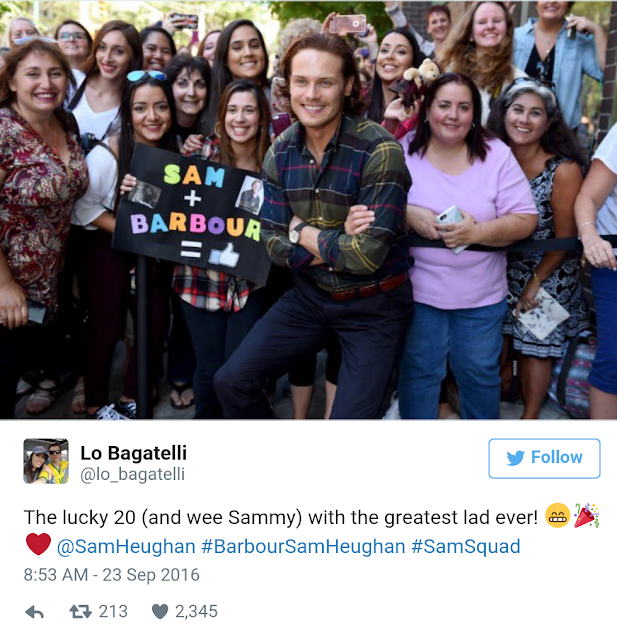 "Can you believe it? They've been there since midnight," Heughan said, clearly bewildered by his own stardom, as we sat down to breakfast. "I was terrified that no one would turn up, and that I would have to fly my family out to pretend that they want to come and see me. It's magnificent."

In person Heughan's Scottish accent is much softer than that of his character, Jaime Fraser, and, of course, he's sporting a Barbour plaid button-down instead of the show's 18th-century period garb.

Heughan was recently named Barbour's global brand ambassador, and we were there to talk shop about the partnership he calls "a perfect fit." After all, he grew up in the same part of Scotland as the company's founder John Barbour, an area called Dumfries and Galloway in the southwestern part of the country.

"Barbour is a brand that I have grown up with and been associated with since I was living near the borders of Scotland," he said. "I was brought up in a very rural area on grounds of a castle. It was a working farm, and I even remember the local shepherd wearing his Barbour jacket."


So what does being a global brand ambassador entail, exactly? Doing promotional events like the one at the store and appearing advertisements—like these ones for Barbour's shirt department which debuted earlier this summer—are a given. But what's most intriguing to Heughan about the role role is the opportunity to design a collection for the brand.

"I've been working with their whole design team and Gary Janes, who is just this fascinating designer. And we've had many discussions and meetings about the line, and what we want it to represent, and how we can marry some of my ideas with their great heritage. We talked about everything that I love and then they made the prototypes."

And while he's never done anything related to fashion design before, Heughan wants to make sure he gets this right, visiting the brand workshops and the company's archives to look at old catalogs, and jackets from the early 1900s, which helped to inspire the line.

"It's completely new. Growing up as an actor, [fashion] isn't something you ever think is going to be part of your job description, but it's been great fun. This family at Barbour they've made me feel very welcome. And it's been great to go down and see their workshops and see the people that work, and the community that they've got," he said.


The collection is slated to launch with a collection of pieces for men and women for Fall 2017, but for now the vintage-inspired prototypes are being kept tightly under wraps.

No stranger to spoilers, Heughan was also tight-lipped when asked about Outlanderseason three, which will follow Diana Gabaldon's Voyager novel. In fact, a siren roared the second I asked my question—even the city wanted the show's secrets kept safe.

"I'm extremely excited about it. I feel already it's a very strong season, and I think people are really going to enjoy it," he said.

As for what's next? Something tells me there could be a Barbour kilt in Heughan's future.

"Actually, we'll see. It might be in the pipeline," he said of the prospect. "I love wearing them, and I think it would be really interesting to see a Barbour kilt, with all the different elements of what Barbour could bring with its wax or herringbone, and all these different materials and all these different fabrics. We may have talked about it. Who knows?"

Outlander fans can only hope.

Posted by Outlander Homepage at 7:11 AM