Son of “Mac” An interview with Clark Butler, by your Aussie Blogging Lass


“He’s spoilt and stubborn,” he said softly. “Ill-mannered. Loud. Wi’ a wicked temper.” He swallowed. “And braw and bonny and canty and strong,” he said, so softly I could barely hear him.

“And yours,” I said. His hand tightened on mine, holding it against the soft stubble of his cheek. 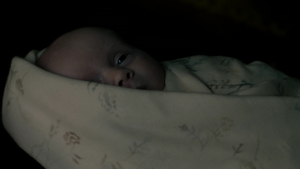 When Jamie Fraser speaks of his son in Diana Gabaldon’s third Outlander novel, the reader is left in no doubt as to the fierce pride he feels for the boy that he cannot raise as his own. In season 3 of the Starz series, viewers were able to witness this bond forming between the two characters, courtesy of the two actors who portray them, Sam Heughan and Clark Butler. So what was it like, as a young actor, to play such an important role? We were thrilled here at Outlander Homepage when Clark Butler agreed to tell us! 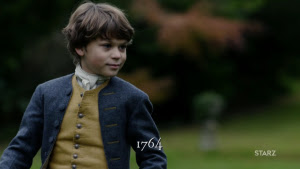 We began by asking Clark to give us his opinion of young Willie and wondered how he went about creating the role. 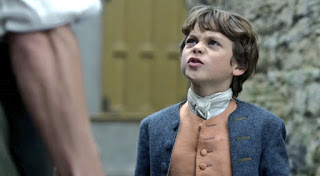 “As he is a little Lord, I thought he should be bossy,” Clark said. “Willie thinks he can boss everyone around and grown ups have to listen to him so I enjoyed doing that!”

As for creating his character, Clark found his costume a useful starting point.

“The old fashioned clothes help to get into character,” he said,  “but the jacket was itchy!”
Itching aside, Clark had a wonderful time on the set. “Being on set is fun,” he told us, before adding, “I did have to do school work in between scenes though!”

“The giant house was lovely and standing outside pretending it was my house helped me imagine that I was a Lord, which was cool,” Clark said.  “We filmed the Papist scene in a small dark real stable barn in the grounds.” 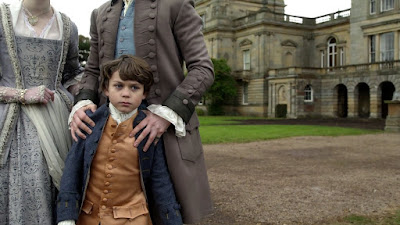 And while Scotland may be famous for its challenging weather, it didn’t phase the young Earl of Ellesmere in the slightest.

“Scotland was cold, but it was great,” Clark enthused. “It even snowed while I was there and I got to build a snowman outside the studio!”

On finer days, young William could be seen riding a horse in some scenes. We wondered whether riding came as easily to Clark as it did to the character he portrayed.

“The horse riding was kind of a challenge as I hadn't ridden a horse before,” Clark admitted, “so the first day I was taken to a horse riding place for lessons. It was so much fun and I really enjoyed it.”

As viewers know, the final scenes between Jamie and Willie are quite heartbreaking. When we asked how difficult it was to film these moments, Clark let us in on a little secret.

“Well, the last scene was actually the first one we filmed, so it was all new and exciting,” he explained. “Our director, Brendan, was very good at giving me instructions.”

As for his co-star, Sam Heughan, Clark had nothing but praise.

“Sam is a great guy,” he replied. “In fact, everyone was lovely and really looked after me.” 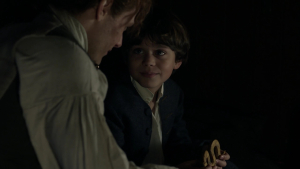 After such an amazing experience on Outlander, we asked Clark if he wanted to be an actor for the rest of his life. He explained that William is not his first foray into performing.

“I’ve done lots of modelling for Marks and Spencer online and for Harrods in their magazines and acting in their online mini films,” Clark told us.  “I was even on the side of one of their vans eating an apple!  I also played the role of the Candy King, in the Amazing Adventures of Super Stan, and have just been in We Will Rock you at school.”

And in the future?

“I do enjoy acting so it would be good if I could be an actor,” Clark said, “but I know that you have to be lucky too.  I'd also be happy being a scientist.”

While we have no doubt that he would make an excellent scientist one day, it certainly seems as if acting is the focus right now.

“I am in a short film called Cold Hill that hasn't been released yet,” Clark said, “and I am busy rehearsing for a musical called Made in Dagenham where I am playing the role of Graham. It's my first role that I will have a singing solo, which I'm nervous about but looking forward to.”

Finally we asked Clark which time period he would like to visit if he could travel through the stones.

“I'd like to go to 2600AD,” he answered, “to see what it will be like in the future.”
Perhaps, one day, scientist Clark will make that happen!


This interview was conducted by Susie Brown, a writer and teacher-librarian who lives in Australia. She’d like to thank Clark (and his family) for taking the time to answer our questions.

Posted by Outlander Homepage at 8:43 AM