By
Whitney Friedlander for Emmy Magazine


(This article explains the essence of the gown Terry Dresbach designed for Claire. It is especially pleasing for Outlander fans that the Emmy voters understood the complexity of Voyager costuming and Terry's vision for the utility gown Claire wears throughout season 3) 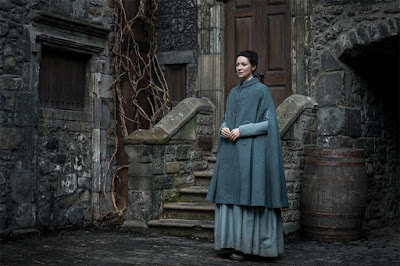 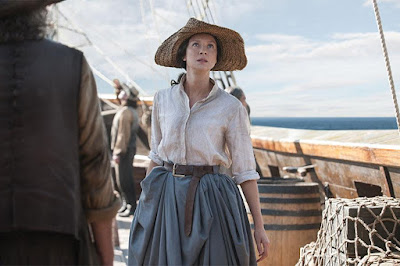 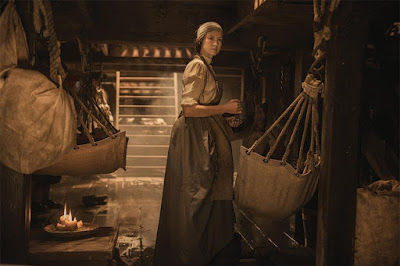 From Emmy Magazine and for more of the article


Fashionistas were left salivating after season two of Outlander — Starz’s period drama-within-a-period drama — in which Claire Fraser (Caitriona Balfe) dons vibrant, cleavage-baring gowns in 1740s French society as she attempts to thwart the Jacobite rebellion back home in Scotland.

Cut to season three, in which Claire spends weeks (half the television season) sailing to the West Indies, leaving series costume designer Terry Dresbach to create a forbearer to the now-ubiquitous fashion-magazine staple, “How Many Ways Can You Wear This Outfit?”

As the action unfolds, the dress — which Claire designs in the 1960s before returning to the 18th century — is sometimes shown in its multipieced, pristine glory (skirt, blouse, vest, jacket, cape), sometimes stripped down and ragged or even with parts used as a headscarf.

By the end of season three, our heroine is — sartorially speaking — right back where she was when she first traveled back in time in season one: “drenched, lost and alone in a strange place,” Dresbach says.

The costume was a continuity nightmare, as each tear, stain or missing button had to be tracked. But it also raised questions about the character herself: Can Claire even sew? And does she have the proper materials to make an outfit that won’t land her in an 18th-century Scottish jail or worse?

Dresbach took inspiration from her own mother, who was not exactly aces at making her daughter’s Halloween costumes. There’s definitely a wrong hemline and uneven sleeves on this outfit, which Claire is supposed to have concocted out of raincoats.

“The idea is that she’s making a suit of armor,” Dresbach says. “It’s my least favorite visual costume on the show, but it tells the best story.”

An outfit like this deserves a name. While Dresbach is prone to calling it Claire’s riding suit, some — like, ahem, her husband, Outlander creator–executive producer Ronald D. Moore — are fond of another term: the batsuit. He went so far as to have Neal Hefti’s “Batman Theme” play as characters constructed it on screen.

Well, Claire does have a tendency to swoop in and try to save things. Fans only have to wait until November to see what she attempts in season four.

This article originally appeared in emmy magazine, Issue No. 6, 2018

Posted by Outlander Homepage at 8:06 AM