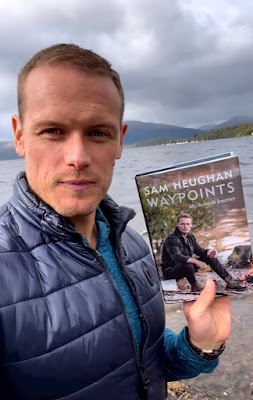 Sam Heughan’s memoir will be titled Waypoints and will be published both in the U.S. (by Voracious, an imprint of Little, Brown) and in the U.K. (by Radar).

Waypoints is a memoir framed by Heughan’s attempt to hike the West Highland Way, a journey he describes as “100 miles from my home to the base of the highest mountain in the UK, Ben Nevis." The idea to do something more than your run-of-the-mill autobiography was all Heughan’s. As reported in Bookseller, Heughan says of his concept behind the memoir, “I wanted to tell the stories and share the experiences that have shaped me, but to do that I needed to challenge myself and spend some time in my own company, away from the distractions of everyday life. And for me there’s no better place to reflect than in the wild Scottish Highlands.” Radar publisher Briony Gowlett added, “With the walk itself as the backdrop to the narrative, the result is a love letter to the wild Scottish landscape that means so much to Sam, and a charming, funny, wise, and searching insight to the world through his eyes.”

On March 22, 2022, the actor and author announced on Instagram that his first solo book project, called Waypoints, will be full of “stories from my life, with personal insight plus my hopes, dreams and plans for the future.” The title follows Heughan's non-fiction bestsellers, Clanlands andClanlands Almanac, both of which he co-wrote with his Outlander co-star and Men in Kilts co-host, Graham McTavish.

Posted by Outlander Homepage at 7:49 AM