LOCATIONS OF OUTLANDER - a glimpse of Castle Leoch, home of Clan Mackenzie! An interview by your Aussie Blogging Lass

Ever since season 1 debuted in 2014, Outlander has been impressing fans worldwide. The acting is superlative; the costumes amazing and the music inspirational. Producer Ronald Moore described the show as “a love letter to Scotland” and indeed, the Scottish landscape  has been like another character. Scottish tourism has benefitted from this adaptation of Diana Gabaldon’s novels, with many fans flocking to see the Outlander sites. One such fan, Fiona McD Gallacher, recently travelled from Australia to her father’s birthplace. On the way, she stopped by Doune Castle in the Stirling district of Central Scotland, or, as we fans know it better, Castle Leoch! She shared her thoughts of the experience with us.


OHP: What was your overall impression of the castle at first sight?
Fiona: It was a gorgeous wet and soggy day the day we went to the Castle so it was always going to be a typically Scottish experience! The Castle sits virtually next door to modern houses down a very narrow roadway and I can only imagine how difficult it was to get all of the cast, crew, animals etc. down there for filming. The neighbours must have been very obliging!

OHP: How much of the castle are you able to tour - are there some bits that are too old/unsafe etc.?
Fiona: Because of the rain it was a bit precarious in some spots outside and there is quite a slope to get up to the main part of the Castle. Inside it was a bit easier and the kitchen and great hall/dining hall were gorgeous! I even managed to find the facilities!

OHP: How is a tour set out/how long does it take? What were the highlights?
Fiona: There is an audio tour that you can take which is included in the entry cost. I didn’t listen to the full tour but the highlight for me was Sam Heughan’s commentary on the kitchen. It was short but fantastic.

OHP: Could you recognise parts of the castle used for filming Outlander - and if so, which parts?
Fiona: Absolutely! The façade is exactly as you would remember it from the opening recaps from most of the first half of Season 1. It looks much larger though and there are a few modern day additions -  where there were horses and hay in front of the castle in the show there’s now a car park! I’ve re-watched a couple of Castle Leoch scenes since I came back and it’s quite brilliant how they made the surrounding area look so authentic. 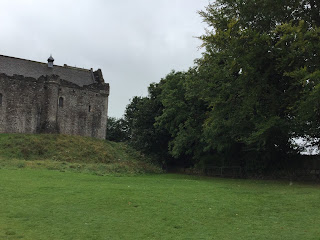 OHP: Does the place have an atmosphere, or is it now more a tourist destination?
Fiona: Some people may see it as just another old building but it does have some of the atmosphere that you get from the screen. The fact that it was raining the day we went made the atmosphere all the more authentic!  It was easy to picture that the Clan might gather in the great hall/dining hall and the grassed courtyard inside the castle walls was wet and soggy and just as it should have been. It’s a definite must-see for Outlander fans.

Sadly Murtagh, Jamie and Dougal were out the day we visited - next time, perhaps! 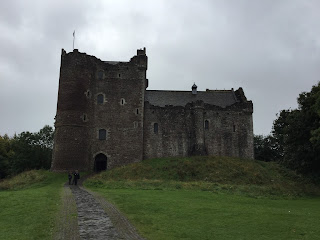 We’d like to thank Fiona McD Gallacher for giving us this glimpse into castle life! Even though Castle Leoch's part in the story is done, we're sure that Season 3 will give us many more beautiful Scottish sights to gaze upon.

This interview was conducted by Susie Brown, a teacher-librarian and writer who lives in Australia. She has never been to Castle Leoch, but it is definitely on her 2017 travel itinerary!


Posted by Outlander Homepage at 8:36 AM