Throughout season 1 of the television series (and briefly again in season 2), actor Steven Cree portrayed the role of Ian Murray, close friend and brother-in-law of Jamie Fraser. The bond between Jamie and Ian is as strong as if the two men were actually blood brothers, something that Jenny mentions to Claire in Dragonfly in Amber:

“I remember, when they were young, auld John told Ian it was his job to stand to Jamie’s right, for he must guard his chief’s weaker side in a fight. And he did— they took it verra seriously, the two of them.”

Despite the passing of the years and the loss of part of his leg, Ian never forgets his promise to guard Jamie’s right. Jamie, in turn, takes comfort from the undying support of his oldest friend. 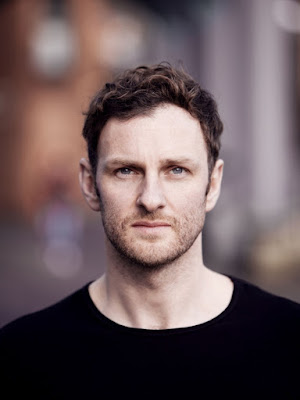 So what is it like to bring the important character of Ian Murray to life? Luckily for us, Steven Cree graciously agreed to an interview with Outlander Homepage, chatting about everything from music teachers, to his favourite breakfast - and even a wooden leg with a mind of its own!

***
“I first got involved in acting through doing musicals at my school,” Steven told us. “I had an amazing music teacher called Fiona McKenzie, who was a huge inspiration. I loved singing and was in the school choir. When I was about 12 I saw the film version of 'Jesus Christ Superstar', which made me really want to be an actor. I was obsessed with the film and watched it literally hundreds of times.”

Then, when he was in drama school, Steven finally got to play the role of Jesus.

“Maybe it was because I could grow a good beard!” he joked. “In a way, I always wanted to act or perform, though I never really believed it would be possible. I'm not from an acting background and didn't know anyone involved. So it seemed very unrealistic.”

As it turned out, it wasn’t unrealistic at all! Steven later moved from portraying the Messiah to being the lead in a musical on London’s West End.

“My favourite role outside of Outlander was playing Cliff in Cabaret,” he said. “Cabaret is an incredible show and Cliff was a fantastic part. No matter what happens for the rest of my career, I was lucky enough to achieve my childhood dream and play a lead part in a London West End musical. The part also came very out of the blue, at a time when I'd been largely unemployed as an actor for 6 years. It was very special and gave me the belief that I could actually make a career out of acting.”

In fact, by the time Outlander auditions came around, Steven was on the list of actors to be approached.

“I auditioned for Outlander because the casting director, Suzanne Smith, asked me to,” he said. It was that audition which led to Steven being cast in the role of Ian Murray.

“When I found out I had the part of Ian, I got the book and read it immediately,” Steven said. “It helped to inform me of the world that Ian comes from and also just helped flesh out my idea of the character. He's written so well in the scripts anyway, but I wanted to be truthful for the fans and help bring that character to life.  Of course, you also bring what you have naturally and then add any other flavours on top of that - plus a wig and a great costume always helps! I wouldn't say Sam, Laura and I discussed the relationships between Jamie, Jenny and Ian per se, but there are always discussions before each scene about what's going on and what the relationships are. Everyone obviously brings a very strong characterisation to their parts too and you bounce off what you are given.”

Of course, given that Ian has lost the lower part of his leg, portraying the character brought with it the difficulties of working with a very specific prop.

“I got the wooden leg before we started filming to practise on,” Steven explained, “but to be honest it took a lot of getting used to. It was really painful at first. The first few days, I was worried I wouldn't be able to do it, as walking and talking was quite tricky! But slowly I got used to it and by the end I was actually pretty fast! I had to do quite a lot of physio through filming though, as it kind of displaced the right side of my back. It made me very, very grateful to have both my legs, that’s for sure. But it was great to have as an actor, as it really adds to the character and helped me play Ian Murray.  The scenes were tiring sometimes but like I say, I did get used to it and at the end of the day I always think I'm not performing heart surgery. I'm just a guy dressing up in clothes with a wooden leg pretending I'm in the 18th century! It's great fun.”

‘Behind the Scenes’ video clips showed Steven walking around with a green sock covering his real leg and we asked whether this was annoying.

“The green sock isn't annoying at all,” he replied. “Why would it be? Well, maybe slightly in the winter, when it's cold and I only have a thin green sock on! But it's very sexy...isn't it?”

After all the discomfort, physio appointments and chilly feet, the wooden leg also contributed to one of the funniest “on set” bloopers.

“There were loads of funny moments,” said Steven, “but possibly the funniest was my wooden leg shooting off in one scene into a basket of cabbages. I tried to keep going, but everyone lost it. Plus I had lost my leg!”

With filming on season 3 starting soon, we asked Steven what he likes to do when he has some time off.

“I'm in the gym a lot,” he replied. “I also love going to the cinema, always have done. It's only annoying when people make loads of noise, but I love going to see an amazing movie and getting lost in it whilst eating Ben & Jerry’s. Actually, I have to go to the gym a lot because I love Ben & Jerry’s so much. My favourite is Peanut Butter cup. And Nutella.

As well as the movies, I love sitting in cafes, drinking coffee and talking sh*t. I'm very good at that! I play football too, which I love and I love watching sports, especially tennis, football and golf.”

With such a wide variety of interests, we wondered what Steven’s perfect day would look like.

“My perfect day would be having breakfast with my wife at my favourite cafe,” he answered.  “Avocado, lime & coriander on rye toast, with crispy bacon and a couple of sausages on the side. Amazing. Then I'd go to Wimbledon to see Andy Murray win Wimbledon and in the evening I'd fly to Italy to go to La Pergola restaurant in Rome - which is the best restaurant I've ever been to - and have an incredible meal. Then, just as I was having dessert, I'd get a phone call from Spielberg completely out the blue, saying he wanted me for his next film opposite Tom Cruise. Hmmm, did you say perfect day or dream day?!”

Finally, we wondered what is coming up next in Steven’s busy schedule.

“I don't have anything lined up for after Outlander yet,” he replied, “but I've written a short film that we are hopefully going to make this year, plus there are always other projects buzzing about. I also have 3 films coming out that I've done in the past year: 'Brotherhood', 'The Titan' and 'Churchill', so that's exciting.” 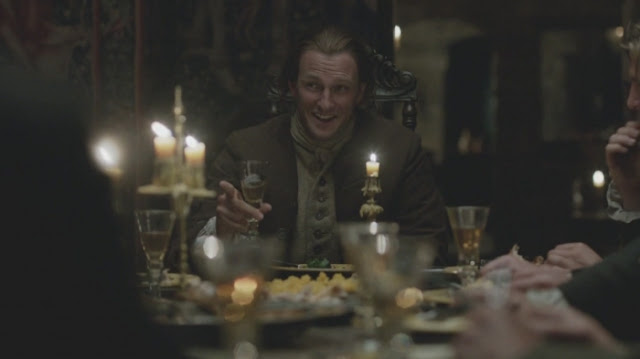 We would like to thank Steven for being so generous with his time and look forward to seeing him on our screens - whether film or tv - again soon!

This interview was conducted by Susie Brown, a writer and teacher-librarian who lives in Australia. As book fans are aware, the character of Ian features in “Voyager,” so hopefully, the wooden leg will behave itself this time!

Posted by Outlander Homepage at 6:59 AM