Duncan Lacroix on Why You should Always Take A Murtagh

For the full article go to source
http://www.dailyrecord.co.uk/scotland-now/duncan-lacroix-you-should-always-8520429#o2COXOFL8BKqZXBz.97

MURTAGH has become the unlikely hero of Outlander and here actor Duncan Lacroix talks about the enduring appeal of the character.


MURTAGH has become one of the most loved characters in Outlander, as Jamie Fraser’s right-hand man, Godfather and trusted confidant.

Irritable, funny, loyal and brave and with the most expressive eyebrows in TV Murtagh Fitzgibbons Fraser even has a hashtag on social media in his honour - #AlwaysTakeAMurtagh. *

But his slow burning appeal was a blessing for actor Duncan Lacroix, giving him the time to fully realise the character as the show developed over two seasons.

“I’m not sure many people really knew who he was for the bulk of season one until the Search episode when my character and Claire tried to find Jamie , then you got more of his back story,” says Duncan.

“Then, in season two, he was the only Highlander who accompanies the main characters to France, which was lucky for me.


READ MORE
Outlander recap: Episode 14, The Search: Murtagh can dance if he wants to

“Murtagh is capable of extreme violence and tenderness at the same time with that sense of humour running through him,” adds Duncan.

But his unrequited love for Ellen (Jamie mother’s) was one of the integral elements of the show and one that Duncan latched onto.

“That idea where you have one love and stay true to that one love, was very revealing to me.

“We’ve all had one person that you can’t get over for a long time, that haunts future relationships. 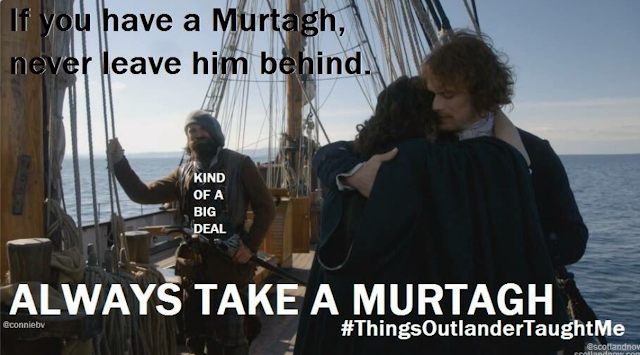 
“Murtagh is also the most open of the Highlanders. He accepts Claire through her actions rather than judging her as a ‘Sassenach’ or a woman.”

The transformation of the irascible Highland warrior, from the pages of Diana Gabaldon’s books to the small screen, has been Duncan’s big career break.

Originally from South London, and with an accent to match – yes, we were shocked at this revelation too – Duncan had a succession of office jobs after studying drama.

Fearing his “dream was starting to fade away” aged 30 he upped stakes and moved to Ireland. “There was a nice artistic community and I was able to properly learn my trade doing play after play after play.”

Acting is an addiction, he says: “It’s a habit, something you can’t do without. There have been times – and very long periods of time - when I’ve had no money and have been in desperate situations but I just can’t let it go.

“Especially when you really pull it off and in theatre you get an immediate gratification from the atmosphere in the room.”


In September, Duncan will join cast members including Grant O’Rourke, Graham McTavish and Stephen Walters for ScotCon, the first fan convention in Scotland.

Duncan is looking forward to connecting with Outlander’s famous fan base.

“We’ve had the most amazing fans from day one and I love these conventions and the chance to get their feedback.”

But do they even confuse Duncan with his character?

“As soon as I open my mouth they are disabused from that,” he laughs.

In Outlander he has a soft Scottish Highland brogue, which makes his real South London accent even more incongruous.

“The accent worried me,” he admits. “Luckily we had an amazing voice coach in Caroline Crawford who really broke the Highland accent down.

“But there are still times when I look back on certain early scenes and wince.”

At ScotCon, Duncan will judge a Battle of the Bands competition, something he and his fellow cast members are all taking very seriously, mindful of the precarious nature of success in showbiz.

“Outlander has afforded me great lifestyle changes. I was just quietly working away in theatre for 13 years before this big break happened,” he says.

Now based in Glasgow during almost 10 months of filming every year, Duncan enjoys a life of relative anonymity, as without his famous beard few people recognise him.

But he’s looking forward to joining his band of merry men on set again.

Before the filming of season three starts again in a few weeks, Duncan will join Sam Heughan and Catriona Balfe for a two-week bootcamp where they’ll reconnect over dinner and literally ease them themselves back in the saddle again.

Fans of the books will be aware Murtagh dies during the Battle of Culloden and there is much speculation whether producers will deviate from the original story to retain this popular character.

“The dynamic is very interesting between Jamie and Murtagh, especially around Culloden,” he says.

Catching himself from revealing too much, he laughs, adding: “I’m still to fully find out myself but even if I knew I wouldn’t give the game away.”

But tellingly, Duncan, at the age of 46, is going to strike while the iron is hot

And dip his toe into the water in Los Angeles.

It’s a daunting and bold move for the actor, who wishes he had a real life Murtagh of his own for support.

“I’ve never had someone like that,” he says. “He’d be a good character to have in your pocket during tricky situations. The fans are right - It would great if you could Always Take A Murtagh.”

* The hastag was coined by our very own writer Connie Verzak in her popular Outlander recaps for Scotland Now.

• You can buy tickets for ScotCon and get more information from here .

Posted by Outlander Homepage at 8:18 AM