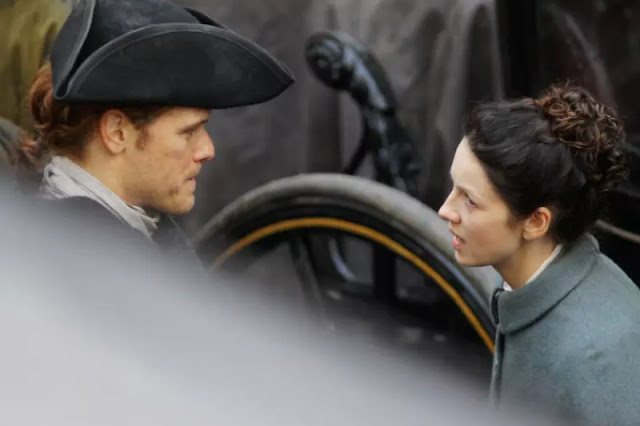 Outlander stars Sam Heughan and Caitriona Balfe were in Edinburgh’s Old Town today to film some scenes for the upcoming third series of the programme.

The series, based on the novels by Diana Gabaldon, focuses on 1940s nurse Claire Randall, played by Balfe, who time-travels to Scotland in the 1700s where she meets Jamie Fraser, portrayed by Sam Heughan. 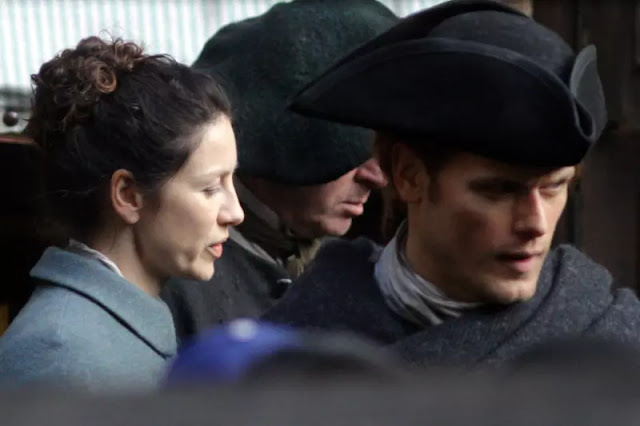 The series, which airs on the Starz network in the US and is available on Amazon Video in the UK, films many scenes in Scotland including at Doune Castle in Stirlingshire, Glencoe, Kinloch Rannoch, Linlithgow, Falkland and Blackness Castle. Some locations, such as Culross in Fife, have seen visitor numbers soar by up to 40 per cent since the TV series aired.

In June last year, a further two series were agreed and filming for the third series has been under way since August last year.

Gabaldon, who wrote the novels from her Arizona home and had never set foot in Scotland at the time, said in October that she was ‘surprised’ by the tourism boom since the novels were turned into a TV series.

She pored over history books and delved into Scotland’s past to research folklore and the landscape while writing the novels.

She said: “I love Scotland and I feel it’s given me a great deal so I’m very happy if I can give something back, but it was never my intent to raise Scottish tourism.

“It is part of what we call the Outlander effect, which is very strange and certainly nothing I ever expected.

“It has this very odd effect. People who like the book want to extend their experience.”

Jenni Steele of VisitScotland said last year: “The interest in Outlander around the world is absolutely phenomenal, especially in the US and Germany, and it’s growing a lot in the UK, even though it is not on mainstream TV.

“We’re really lucky that Scotland was voted the best cinematic destination in the world last year. I think we may have a lot of Outlander fans to thank for it as they were continually trying to encourage people to vote for Scotland. “We beat some very good destinations like New Zealand and America.

Posted by Outlander Homepage at 7:56 AM