Any true Outlander fan can tell you that the Fraser clan motto, “Je Suis Prest” means “I am ready.” For actor Ryan Ralph Gerrard, it’s a motto that he seems to have taken to heart. After appearing as an extra on Outlander’s season 1, Ryan knew that he too was ready - ready for more. So much so, that he’s set to return to the show in season 3 in a larger, yet-to-be-announced role. While the specifics of his return are currently under wraps, Ryan agreed to talk to Outlander Homepage about the rest of his career. He also shared his choice of time period were he suddenly able to travel through the stones himself! 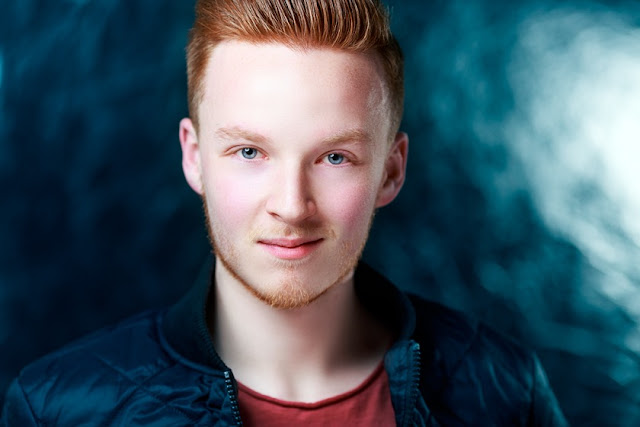 Indeed, it was travel that first set a young Ryan on the acting path.

"As a child I was lucky enough to go abroad quite frequently with family,” he explained. “Unlike my sister, Laura, who was quite reserved as a child, I possessed a lot of confidence and so I would talk with the hotel manager and performers, to organise a way in which I could be involved with their shows! I must've been about 4 or 5 at the time, but I remember vividly - at a bar in Benidorm - watching a man named Martin Kemp perform his one-man show of impersonations. For me, the idea that one man was making a room of 100 or so people laugh or cry was magical. I think from that moment on, my flame of ambition to become a performer was lit and it still ultimately drives me forward to this day.”


It took a while before Ryan’s performing life could begin, however.

“I grew up just outside of Glasgow and there were never any artistic opportunities in my area,” Ryan told us. “Luckily for me, my parents could see my passion from a young age and so they raised the funds to send me to The Glasgow Academy of Musical Theatre and Arts. During my 3 years at the school, I made contacts from both the theatrical and TV/film industries which led to me joining an agency for background artists. During my high school years, whilst all of my peers were experimenting in the world of 'partying', I tended to spend less time socialising and more time learning about the craft. I would spend most of my free time on the sets of BBC’s Waterloo Road and BBC Scotland’s River City as an extra. This really opened my eyes to how a tv or film production was run. It was something I'd never been taught and ironically it’s where I now spend all of my time.”


Family continued to play an important part in Ryan’s developing career, with an early role reliant on him having had an emotional personal experience. 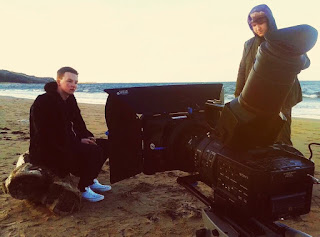 Ryan on set of "James and the Urn"

“My grandad, Tom Gerrard, had recently passed away,” said Ryan, “when I saw the audition for ‘James and the Urn’ come up. It required the actor to have knowledge or experience of being connected to a loved one who had recently passed. So, in my audition tape, I used my Grandad’s urn and ashes. This was the first time I was emotionally invested in a role, because what was happening in reality had parallels with the story. ‘James and the Urn’ premiered at the Edinburgh Filmhouse cinema in 2014 and enjoyed a sold out run. I then went on to do ‘Outlander’.


When Season 1 began filming, Ryan was invited to be a background artist for a month, while the Witch Trial scenes with Caitriona Balfe and Lotte Verbeek were being shot. It was an unforgettable time.

“I can honestly say, that at that time it was one of the best jobs I had ever done,” Ryan said. “I met some incredible friends during that month and because we spend mostly every hour of every day together, we bonded really quickly. All of the actors were extremely humble and warm towards me.” 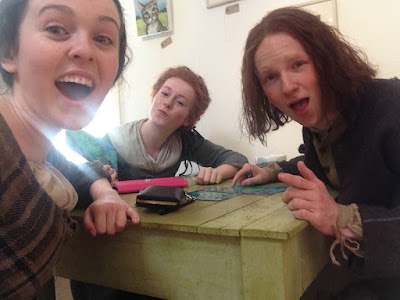 With Melissa Boreland and Emma Findlay during Outlander Season 1


But Ryan knew he was ready for more.

“Essentially, like any aspiring actor, I have been climbing the ladder,” he said. “There came a time where I had to call it a day doing extra work. Watching Caitriona and Lotte perform really inspired me to keep pushing and to fight to get to where I wanted to be. Background artists are extremely important to making a scene look believable, but I knew that I wanted to be next to the main actors on screen, not behind them.”


And it appears that his determination has succeeded.

“Who knew that one day, I would be back on Outlander, as a cast member?” Ryan teased. “I definitely struck gold!” 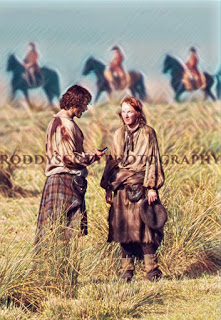 On set for season 3, with Sam Heughan


Unfortunately, Ryan is not allowed to talk about his season 3 role or experiences just yet, but he has promised to do so later in the year. So, while we wait, we contented ourselves with asking him which time period he would travel to, if he suddenly found himself able to go through the stones.


“I've always said that I'm an old soul,” Ryan answered. “I really love the 1920s and the whole vibe and glamour that was associated with that era. Of course, it was awful for the majority of people who didn't have money - but if I could go back and wake up every day, throw on a three piece suit, smoke a cigar, listen to jazz music and sip a cocktail, I'd be quite content!”


This sounds like a relaxing lifestyle, so we asked Ryan to tell us about his real life “down time” and to share his idea of a perfect day

“Most of an actor’s life is 'down-time',” Ryan commented, “so to be completely honest, most of it for me is filled with constant auditions and liaising with contacts about work. However, my idea of a perfect day is to relax at home with a coffee nearby, reading lots of new plays and watching the new uploads to Netflix. It's important for me to keep up to date with TV and theatre. It's constantly changing and I'm always learning. I'm also really beginning to enjoy 10 minutes of meditation in the morning. I used to think it was a waste of time, but some of the projects I'm currently doing require a lot of emotion. Getting into the right state of mind and being focused is key to getting it right.”


So what’s coming up next for Ryan Ralph Gerrard?

“Now that having a role in Outlander is checked off my bucket list, I really want to expand my range of roles,” Ryan told us. “I think it's important for any actor to really explore the range of their ability. It's really easy to be stuck in a box and told, "this is who you should be" all the time, so I just want to play and see what I do and don't connect with.

In late 2016, I played the lead in “Great Expectations”. This was a contemporary take on Dickens’ classic tale, written for the stage by Neil Bartlett. It was a show that was part of my acting diploma and it allowed me to network with lots of people. The footage was shown to an agent in London and I gained representation as a result." 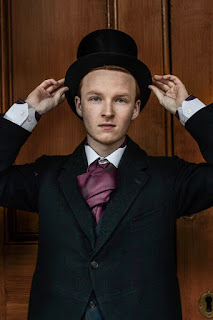 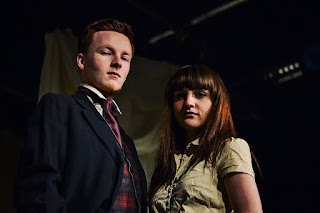 "I already have a few projects lined up that take me through into 2018," Ryan said. "I'm working with Matthew J. Howie on "Roxy Smiles”, that's due to film in Spring. 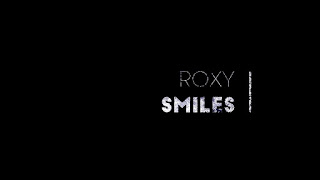 As well as that, I have a film I'm shooting in Scotland between now and summer called, "The Second Life Club" written by Simon Jake.

In the Autumn I'll be shooting "CATALYST" in London, written by Elizabeth J. Cassidy. It's one of the projects I've most been looking forward to. It's been in development for a few years now and it's finally happening.


2016 was a fantastic stepping stone in my career, but in 2017 I'm aiming even higher. I can't wait to see what the year holds for me.”
We can’t wait to see either and want to thank Ryan for taking the time to speak to us. We’re already looking forward to our next chat!


This interview was conducted by Susie Brown, a teacher-librarian and writer who lives in Australia. She’s impatiently waiting for season 3 to begin, so that she can find out the identity of Ryan’s mystery character!

Posted by Outlander Homepage at 7:43 AM