"To the Haggis!" The Burns Night Supper

While drunkenly bellowing "Auld Lang Syne" at the stroke of New Years midnight, have you ever wondered where such an oddly worded song originated?

Well, it originated in Scotland, penned by native son Robert Burns (1759-1796), who is not only considered one of the Greatest Scots, but is celebrated worldwide every January 25th, with Burns Night festivities commemorating the poet's birth.

Now, you're probably thinking; well who was this amazing man, who is still celebrated two hundred and fifty eight years later? Surely he must have been someone of noble birth, a man of great importance from a well known, wealthy family. Perhaps he even held a title, or made history with feats of bravery in some great battle?

Not hardly. Despite his strict, hardscrabble, agricultural upbringing,
Scotland's National Poet was the 18th century equivalent of a modern rock star. Sadly, his short life was spent living from pillar to post, while fathering twelve children with numerous women before his death at age thirty-seven. Then again, what would we expect from the guy who wrote bawdy ditties with titles like: Nine Inches Will Please a Lady.


One would think a poor farmer's eldest son would be the least likeliest of lads to become his nation's most celebrated poet, yet the "ploughman's poet" is still frequently recited, and used in other literary works.
Mr. Burns witty and sometimes sage quips, have become famously quoted sayings.
My favorite being: "Man's inhumanity to man, makes countless thousands mourn."

Besides the previously mentioned Auld Lang Syne, popular poems (written in both Scot's and English languages) such as: "To A Mouse" (an ode to the field mouse whose nest he destroyed accidentally while ploughing), have been credited for inspiring the literary likes of John Steinbeck, (Of Mice and Men) and Sidney Sheldon, (The Best Laid Plans) as well as other well known authors.

"But, Mousie, thou art no thy lane,

In proving foresight may be vain;

An' lea'e us nought but grief an' pain,


Other well known lauded works by Robert Burns include: Ae Fond Kiss, Tam O Shanter, A Red Red Rose, and The Battle of Sherramiur, just to name a few. But the most recited of his works besides Auld Lang Syne would have to be, The Selkirk Grace, and Address to a Haggis. Both required recitations at any proper Burns Night supper. 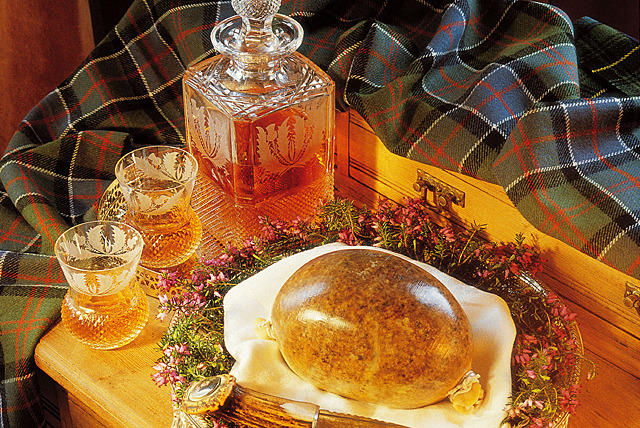 The Burns Night supper has become an international event as celebrations are held by Scots around the globe each January to commemorate "Our Rabbie". It's much more than just a pot luck, or a casual gathering of friends. A true, and proper Burns Night is quite the show, with revelers garbed head to toe in Highland/tartan finery, the sound of pipes and drums, polished swords and the most important guest... the haggis.
Those attending are piped into the venue, and once everyone has their dram ready, the haggis is piped into the room. The procession is led by the bagpiper, followed by a sword bearer, next the whisky bearer, the haggis bearer in the middle, ending with two more broadsword protecting the rear flank. Once the haggis is carefully settled in it's place of honor, it is "addressed" by some lucky fellow reciting Burns poem by the same name, in the Scots dialect, as he slices open the steaming treat with his dagger.

Finally, the haggis is toasted with everyone tossing back a dram of whisky, (you cannot have a Burns Night supper without uisge beatha, the "water of life") shouting "to the haggis!!".
The Selkirk Grace is then spoken over the meal, and supper of traditional Scottish food is served.

Some hae meat an

And some wad eat that want it;

But we hae meat, and we can eat,

And sae let the Lord be thankit!


As guests are polishing off a repast of neeps, tatties, oatcakes, cottage pies, and desserts like cranachan, and tipsy laird, (whisky trifle) traditional toasts are made, always in a specific order.
First there is the Immortal Memory honoring Robert Burns himself. Next is the toast to the lassies, always made by a gentleman, followed by a toast to the lads, naturally made by one of the ladies present.
These three toasts usually border perilously close to roasting the intended recipients, but rarely ever cross the line.
Lastly there is a more respectful, and reverent, toast to Scotland.
The rest of the evening is then spent reciting, or singing selected poems and verse from the birthday boy's vast body of work mixed in with music, and dancing, 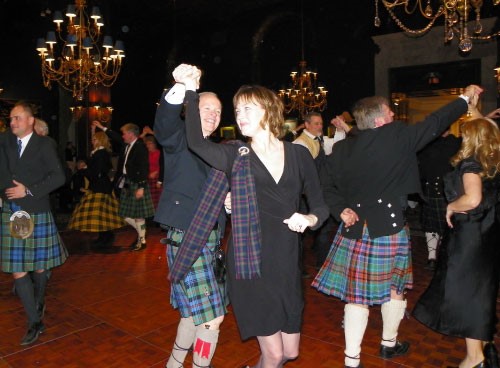 aka a ceilidh. The party concludes with those present gathering in a circle, crossing arms, and holding their neighbor's hands, while singing the first two verses of.. Yup! You guessed it! Auld Lang Syne 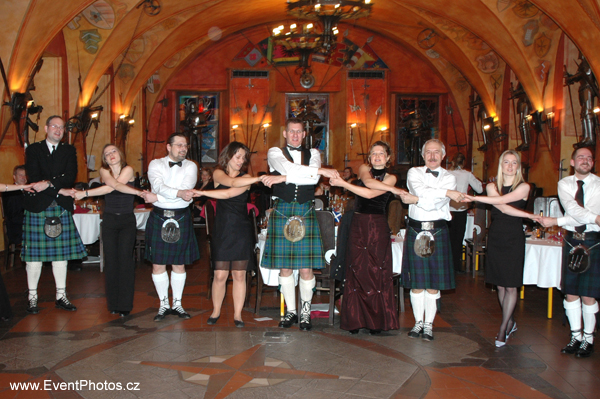 If this sounds
like a lot of fun, that's because it is. It is an event like none other, and anyone is welcome to join in. You don't have to be a Scot to enjoy Robert Burns poetry, attend, or even host a Burns Night supper. You don't even have to wear tartan if you don't have one, although it is a sight to see the kaleidoscope of clan colors swirling around the dance floor. All you need is a haggis, some neeps, and tatties, and plenty of good single malt scotch whisky, to share with your friends.

Posted by Outlander Homepage at 7:17 AM