This Sunday, Caitriona Balfe Would Like You to Ask Her About Something Other Than Her Dress!

by MAYA SINGER
For VOGUE 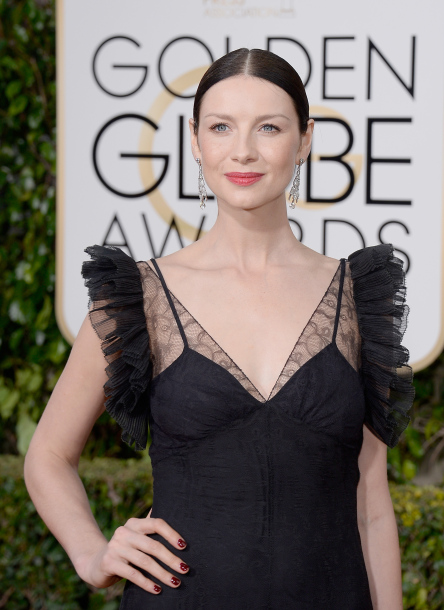 When Golden Globe nominee Caitriona Balfe steps onto the red carpet on Sunday night, she’ll have an advantage over the other actresses taking their gowns for a spin.
Long before she nabbed the part of Claire Beauchamp Randall Fraser in the Starz series Outlander, Irish beauty Balfe was walking runways for the likes of Victoria’s Secret and Chanel. And her decade in the fashion trenches has influenced her red carpet choices, inspiring her to don nervy looks like the black Alexander McQueen frock she wore to last year’s Globes. (She’d stomped the McQueen catwalk, too, back when the man himself was still at the house’s helm.
“When you’re modeling, you’re there to elaborate the clothes, you can’t forget, the clothes are the story. But as an actress, the clothes are there to elaborate you,” she says, “It’s been an interesting adjustment, learning to express ‘me.’ ”) Now, Balfe says, she’s also taking red carpet cues from her Globe-nominated Outlander role, and channeling the outspoken Claire in her approach. “It’s insane,” Balfe says, “that all we actresses seem to get asked about is what we’re wearing. Those interviews go out all over the world—and we’re in a moment now where, as citizens, we should be seizing that opportunity to speak up, speak our minds about the things we see happening around us. There’s plenty more to talk about than clothes.” Here, Balfe speaks up.

Did you always know you wanted to act, or was that something that grew out of modeling?
I was actually in theater school in Dublin when I got scouted. I was in a supermarket, of all places—collecting money for charity. That led to some local work, and then that local work led to my getting signed by Ford, and going to Paris, which is when I started focusing on modeling full-time. Not, by the way, that I was an instant hit; it was the tail end of that Brazilian glamazon-era, and me being very white and very Irish, I didn’t quite fit. But then, all of a sudden, the thing became pale Belgian girls, which wasn’t me either, but close enough, I guess! That was when I started landing shows like Chanel and Vuitton and Givenchy.

And then what ultimately got you back into acting?
You know, the bug was itching. It’s really hard to step away from a gig that’s fun to do, and where you’re making money, but after six or seven years of being in the modeling routine, I was feeling kind of burnt out, and in need of something else. I was living in New York at the time, and started taking classes. And then I moved to L.A., and kept taking classes there—I’d read an article about Amy Adams, and she’d mentioned her teacher in it, and it turned out the studio was walking distance from my place. Which was very convenient, as I was only just then learning to drive.

So then, a role here and a role there and then, Outlander?
Exactly. I don’t think I even knew how lucky I was to get that part—I mean, I loved Claire, and we’d gotten a full season order for the show, so obviously it was a great gig, but it wasn’t until we were four or five episodes into shooting and I flew to L.A. to do some press, that I realized what a built-in following the shows had. We did this fan event, and all these people who loved the books came out, and they were just clamoring for the show to exist. It was like, ohhhh. This is going to be big.

I’ve never read the books, and honestly, when I first heard about the show, it sounded pretty silly to me. Time-traveling bodice ripper? Eh. But then when I finally watched it, I was really impressed by how meaty the themes are. I mean, there’s a lot of fun in the series, but it’s also unflinching in its exploration of feminist themes like patriarchy and sexual violence and women’s need to control their own reproductive choices.
Yes, yes, yes. I think there have been a lot of skeptics, like you, who have been turned around by actually watching the show—we wouldn’t have had such success, if that weren’t true. Basically, everyone who works on Outlander tries really hard, all the time, to stay focused on the human dimension of the stories we’re telling, and if you’re telling a story about a woman living in a time when women’s rights were severely constricted, those themes are bound to emerge, and you have to take them seriously.

Speaking of things that are silly: When you’re on the red carpet, do you ever get sick of answering the question “what are you wearing?”? I’ve been privy to that experience, and it seems like you ladies get asked that like, a zillion times.
Oh my gosh. It’s surreal. Here you are, at a celebration of your craft, and all people want to know is what you’re wearing. Again and again. And not just that, but even down to—talk about your nail polish! You don’t want to be rude, but. . . . [sighs] I mean, I do appreciate, it’s a great marriage between entertainment and fashion, and I love that I get to borrow these incredible dresses, and designers—especially lesser-known ones, who I do like to support—get great PR out of it. But I do wish I had more opportunity to talk about that work. And not just that. I mean, one of the things that’s inspiring about playing Claire is that she’s this strong woman, standing up against chauvinism, and that’s really made me consider my own responsibilities, as someone who has a platform. I realize some people object to the idea of actors expressing their political opinions, but we’re human beings living in this world, responding to what’s going on, and why shouldn’t we be able to take a stand on what we see as injustice?

Okay, so if you were going to take a stand on something, what would it be?
Well, you know, if you watch Outlander you see stories about rape, about unwanted pregnancy, about women taking matters into their own hands, to provide a solution. To provide a choice. And in the meantime, you see bills like the one just passed in Ohio, where access to abortion services has been rolled back, and there’s no exception for rape or incest. And Planned Parenthood, which provides women crucial medical services aside from abortion, is under attack, and it just seems, at times, like all the rights our mothers and grandmothers fought for are being chipped away.

The thing that’s so odd to me about what’s happening in America, is that it goes against what we’re seeing in other places. I mean, I’m Irish, and in Ireland right now there’s a big movement to make it possible for women to get abortions in instances where their life is in danger—the laws there are so strict, even that’s not a given. There are women fighting for [greater] access to abortion in Poland. Do the women in America really want to go back to that?

I guess it’s a lot easier for red carpet interviewers to ask about your dress. And so, anyway, what will you be wearing?
I haven’t decided! Or, I have; I think I know, but I’m giving myself a second option, just in case.

Posted by Outlander Homepage at 6:52 AM