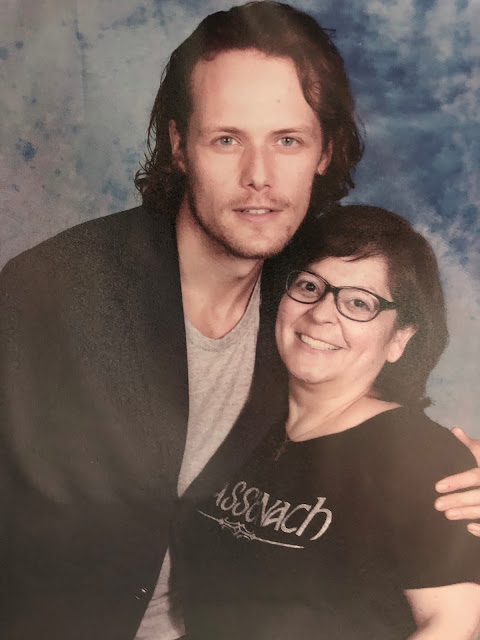 My next interview in the “Outlander- the fans who make it” series is with Lisa Rojas, who created the Outlander HQ Twitter site, with more than 21 K followers, as well as a Facebook group.
I met Lisa in Scotland in September 2016, where we both attended a ceilidh in Culross, which was organized by Mary’s Meanders Tours. We spent a fun evening chatting and dancing.


● Please tell us about yourself
My name is Lisa, and I’m from the great state of Texas. I’ve lived here most of my life, but I lived in Madrid, Spain, when I was in elementary school. It was an awesome experience, as we traveled all over Spain and visited France, Italy and Switzerland, during the last summer that we were there.
I work as a paralegal, and I have a Bachelors in Sociology.
I’ve never been married and I have no children. My father died at the age of 59 from a glioblastoma. My mother was recently diagnosed with Alzheimer’s, and I am her primary caregiver. Sometimes life really sucks, but I always try to be positive, and find reasons to smile every day.
My hobbies include reading, baking, traveling and, occasionally, I’ll break out my clarinet and play a few tunes
I spend a lot of my time playing with my two rescue dogs. 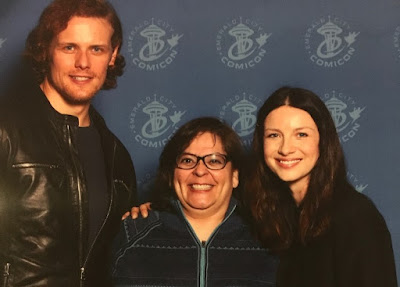 ● What made you start the Outlander HQ site and can you tell us a little bit about that?
I fell in love with the books, and started following Diana Gabaldon on Facebook. I had a Twitter account for years, but I was never interested in it, until Outlander came along. I found that Diana was much more active on Twitter, than on Facebook, so I started following her first, and then started following Sam & Caitriona.
Outlander HQ was started by me and a friend I met on Twitter, named Astrid Gonzales. We met in a group DM; Dorianne from Outlander Homepage, D. Elizabeth Aymett and Janis from Outlander Central were also in the group. These were the first fan interactions I really had. In the beginning, I’d only look at Diana’s and Sam’s tweets, and I didn’t interact with anyone.
I’ve always thought it would be fun to have a fan site, because I love meeting people and I really love talking about Outlander. It’s great to be able to share with fellow fans who, hopefully, don’t think I’m totally nuts!

● How much time do you spend every day on Outlander?
I probably spend anywhere between 30 minutes to an hour a day on Social Media; it fluctuates depending on if there’s an event. I allow myself about an hour spread throughout the day, before work, lunch and in the evening. Sometimes I’ll sneak tweets or post to Facebook during work.
I am the one who tweets and posts to Facebook most of the time, and I’m on every day. Whitney helps out when it’s busy and, a few times a year, Carrie will tweet something.

● What do you like most about the Outlander books and show? Which character in Outlander is your favourite?
My favorite character in the Outlander books and show is Jamie Fraser. I fell in love with his character, his sense of humor, his love for Claire, his loyalty to his kin, his intelligence, his strengths and his weaknesses, everything about him. Most people who know me, know that Jamie is the center of my Outlander universe. I’m happy when Jamie is happy, because being sad for him takes up a lot of time.
I truly like Lord John Gray, for many of the same reasons I love Jamie.
Voyager and Drums of Autumn are my favorite books of the series, because I love reunions. So, my favorite parts of Voyager are: Jamie being a part of Willie’s life, since he didn’t get to raise Bree, and the printshop reunion with Claire, I get all choked up every time I read it.
My favorite part in Drums of Autumn is when Jamie meets Bree. I like so much more about each book, but those are my favorite moments. 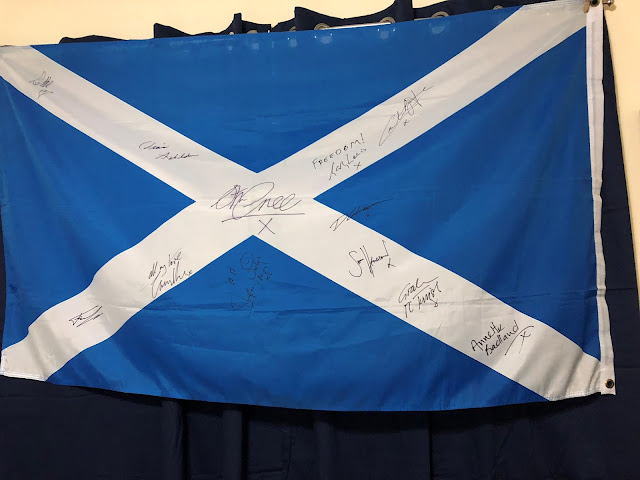 ● How has Outlander affected your life and/or lifestyle?
Through Outlander, I’ve met so many wonderful people on Twitter, via DM groups and in person.
I’ve flown to England twice and visited Scotland two years in a row. I flew to New York, Arizona, Los Angeles and Seattle for Outlander events. Even though I fly solo, I always have someone to hang out with one I get to where I’m going.
I went to see Sam Heughan as the Grand Marshall of the Tartan Parade in NYC. The lady next to me thought I deserved a Scottish flag, because I traveled so far. Now it’s my favorite souvenir, and I take it to every convention.
I had one instance on my first visit to London at Highlanders 1, where someone come up and ask if I was from Outlander HQ. I couldn’t imagine how she would know who I was. I forgot that my posts to Facebook have my picture on them! It was a little strange, but I can’t even imagine what it’s like for the Outlander cast. The best thing about Outlander is the fans. So much fun! 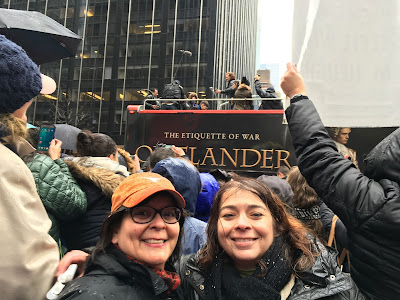 ● Is this the first fandom you are a member of? What made you decide to join this fandom, rather than any other one?
This is the first and only fandom I have ever cared about enough to get involved. I joined because of the awesome Diana Gabaldon. I’ve stayed because of the amazing cast and crew of the show, and all the wonderful people in the fandom I’ve met in person, through DM and via email.

Outlander is the first fandom I was excited about. I love the books and couldn’t wait to see it on TV. A co-worker introduced me to the books several years ago. She always saw me with a book on hand and would ask what I was reading. One day she asked if I had ever read Outlander, and I said, no. She said, “you HAVE to read at least the first book.”
I was totally addicted to Jamie Fraser and didn’t want to stop at one book. I’ve converted quite a few co-workers to the clan. My family? I finally got my middle sister to see episode 1. She was instantly hooked and binged all 3 seasons in a week. One sister down, another to go.
.
● Have you met Diana or any of the actors of Outlander? If so, which actor did you enjoy meeting the most? If not, who would you like to meet the most? 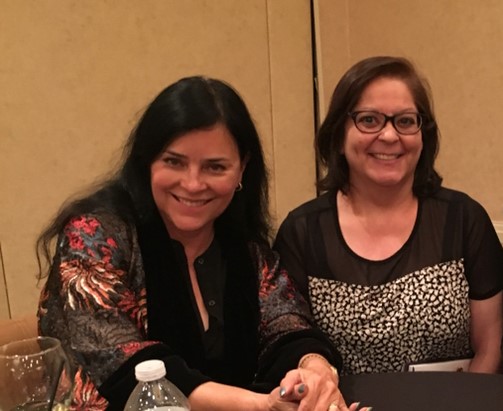 I adore Sam, Diana and all the cast I’ve met, but Caitriona has been my favorite to meet in person. She’s so beautiful and kind. She engages with fans and makes you feel really appreciated. I was so giddy with excitement over meeting her, I look like a total dork in both pictures I took with her.


All graphics and edited formats for this blog by, Dorianne Panich
Posted by Outlander Homepage at 8:13 AM