My next interview in the “Outlander- the fans who make it” is with Julia LeBlanc, who makes beautiful Outlander videos for the fandom’s enjoyment.

I have not yet had the pleasure of meeting Julia, but I hope to, one day. 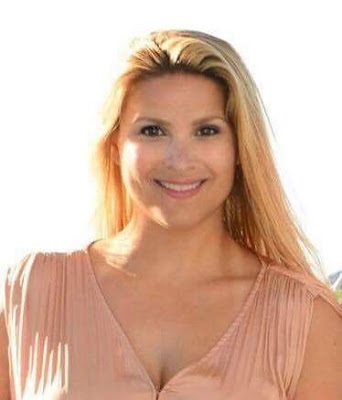 Please tell us about yourself.
My name is Julia LeBlanc, I’m 37 years old, and I live in Toronto, Canada, and was born and raised there. I love my city and, though the weather isn’t always great, you’re exposed to so many different people, and still are able to keep close connections with friends from your childhood. It’s the best of both worlds.

I’m a stay-at-home mom to two great and VERY energetic kids (7yrs and 5yrs), and have a wonderfully supportive husband.
My background is in education. I was an Early Childhood Educator for several years and, after that, I got my Bachelor of Education. The school boards here weren’t hiring, so my husband and I decided to start a family. I always thought I’d go to work, but I was surprised by how much I enjoy being a stay at home mom. I consider myself very lucky.

Apart from Outlander and making videos, I don’t have many hobbies, as taking care of my family takes up most of my time.
I like to travel and go to concerts, and wish I had more time to go to shows.

I enjoy reading, and I have a great group of friends and family around me, that I love spending time with. 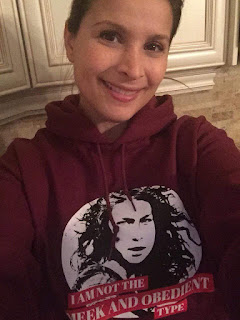 What made you decide to start making videos about the show? Have you done this for other shows as well?
After the mid-season one break, I started to notice Outlander videos on YouTube. I looked to see if someone had made one with “Turning Page”, because I thought it would have been perfect for Jamie and Claire. I also thought that one with “Against All Odds”, for Claire and Frank, would be great. I couldn’t find them. So, I thought I might as well try making them myself. It was a long process but, once I got the hang of it, it got so much easier.

Outlander is the only show I have made videos for. I may make them for others but, there is something so special about Outlander, that I just can’t get enough of it. I also have so many songs that I may never get to. Unfortunately, there aren’t enough hours in the day.


How many videos have you made about the Outlander show so far?
I guess around 200. I know that sounds like a lot. Actually, I think there are more than that. By the end of Season 1, I was already almost at a 100 videos.


How much time do you spend on each video?
Each video is different. Some videos I can finish in about 2 hours, some can take 6 hours. But I usually have a clear idea of what I want to do with the video before I start, and where I want certain scenes to go. Sometimes it's one line of the song that reminds me of the show and I make the video around that. For example, in Uptown Funk, the line was "stop, wait a minute", and I thought of the scene where Dougal tears off Jamie’s shirt, and Jamie puts his hand out to stop Murtagh. At other times, like in the video "I Was Here", once I start it, it takes an unexpected turn, and I change it from my original plan. It's always a fun endeavour.


How much time do you spend every day on Outlander?
It really depends on the day, and the kids. Sometimes, I spend 30 minutes on it, sometimes an hour, sometimes I don’t get to spend any time on it. I’ve been scaling back on SM recently, and focusing on videos again. It brings me a lot of joy to re-watch and edit these fantastic scenes.


What do you like most about the Outlander books and show?
I read and watch so many different genres. I love that Outlander has it all; adventure, love, heartache, struggle, strength of the human spirit…with everything that happens, this beautiful love story of Jamie and Claire is at the foundation of it all. I love that the characters aren’t perfect. Diana doesn’t make cardboard cut-outs of heroes. I love them, and sometimes I want to grab them and shake some sense into them. Her writing is so rich, that we feel like we are in the their lives with them, and feel what they feel. That’s why I think her writing brings out so much passion in fans.

I adore the show so much. Jamie and Claire are played so perfectly by Sam and Caitriona. They set every scene on fire. All the actors breathe a life into these characters Diana created, which is so unique when compared to other shows. Ron D. Moore, and the whole cast and crew, have done a fabulous job adapting Diana’s books. That is no easy task, and I’m so grateful as a fan that I have these books and show. It’s the best of both worlds.


Which character in Outlander is your favourite?
I don’t know if I could pick one. I think it would depend on where we are in the story. I adore Jamie, Claire and Young Ian . But I couldn’t pick one. Jamie, Claire, Roger, Young Ian, Brianna, Fergus, Germain…all of them hold a special place.


How has Outlander affected your life and/or lifestyle?
It’s nice to have something that is so different from the rest of your life. It’s like an escape. When you’re at home with two crying kids, that is such a blessing. It’s a totally different world and characters you can get immersed in.

I’ve been a huge Outlander fan since the first episode when my sister said I “had to” watch it. By the time the second episode ended, I started looking it up online, and found out that Jamie and Claire get married. Well, I couldn’t wait another week, and I had to get the books immediately. I bought all 8 books and read them in 10 weeks. I couldn’t put them down.

Outlander also brought me and my sister Nancy closer, which is wonderful. It was something we could share together, and the fun of fangirling together is pretty incredible. She encourages me to make videos and she has started making some for other shows too.


Is this the first fandom you are a member of? What made you decide to join this fandom, rather than any other one? What do you like and dislike about this fandom?
Before Outlander, I never really knew what a fandom was, or that “fangirling” was a thing. I was a fan of other shows (Glee was one of my favourites) and actors, but I never understood Twitter or Facebook. My sister got me into Outlander, and then told me about FB groups and that’s how I really got into the fandom, through her suggestions. So it’s all her fault, really.

I enjoy being in this fandom the vast majority of the time. There are things that irritate me, but I try to scroll past the negative stuff.

There are so many wonderful and talented Outlander fans. These fun and positive experiences are why I’m here; to share and marvel in people’s work, to hear people’s points of view and their theories on the characters, on what they think will happen; to get an insight into how Diana writes, and what she thinks of her characters and why they behave the way they do; the cast and crew, Sam, Caitriona, Richard, Maril, Matt Roberts…they are all so lovely and giving to the fans.

All of this outweighs the negatives. I’ve always said I am lucky to be an Outlander fan.


Have you met Diana or any of the actors of Outlander? If so, which actor did you enjoy meeting the most? If not, who would you like to meet the most?
I have been lucky enough to have met Sam, Caitriona and Diana. I think I may have enjoyed meeting Sam the most, but that’s just because I was able to spend more time with him. He was in Toronto, and my sister and I went to “The Morning Show”, along with other fans, to see him. He came out afterwards, and chatted with us. I told him that I made a video that he’d shared, and he got excited and told me it was amazing. 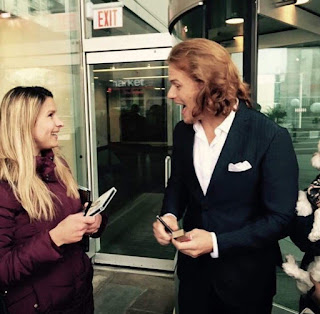 I met Diana at the Fergus Scottish Festival last summer, and she was so amazing. She stayed back, to make sure all fans got to meet her, and she signed all our books, which was so gracious of her. I was the second-last person in the queue, so I was grateful. 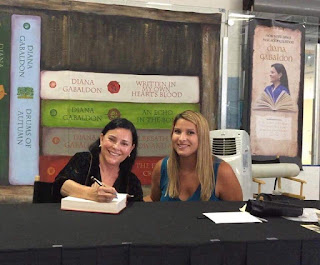 When I met Caitriona” in Toronto, she was in a bit of a rush, as she was leaving “The Morning Show”, and heading out somewhere else. She was also sweet, and signed autographs for fans, and took pictures with those there. 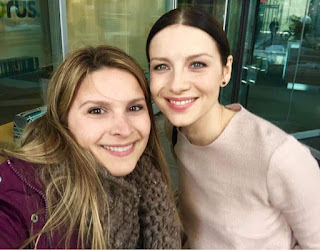 (I’m hoping to meet Graham this summer at the Fergus Scottish Festival.
I’d love to meet Richard and Sophie, John Bell and David Berry, as all are wonderful actors.)

All graphics and edited formats for this blog by,  Dorianne Panich
Posted by Outlander Homepage at 10:04 AM