The world of Outlander is famous for its couples. Across the 3 seasons that have screened so far, fans of the STARZ series have watched different duos interact with Jamie Fraser. Sometimes these relationships - like those with Colum & Dougal, or Rupert & Angus - have been stormy and complicated, while other characters, like Ross & Kincaid, show nothing but loyalty. 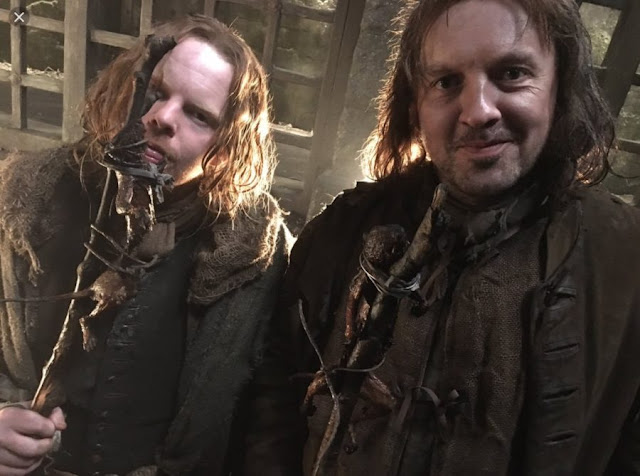 In season 3, after the horrors of the Battle of Culloden, a new pair of characters enters Jamie’s social circle: in the form of Lesley and Hayes. From fellow prisoners at Ardsmuir, to erstwhile smugglers in Edinburgh, to fellow crew on board the Artemis, Lesley and Hayes will do anything for Jamie. So what is it like to play one of these characters? Keith Fleming, aka Lesley, sat down to tell us. 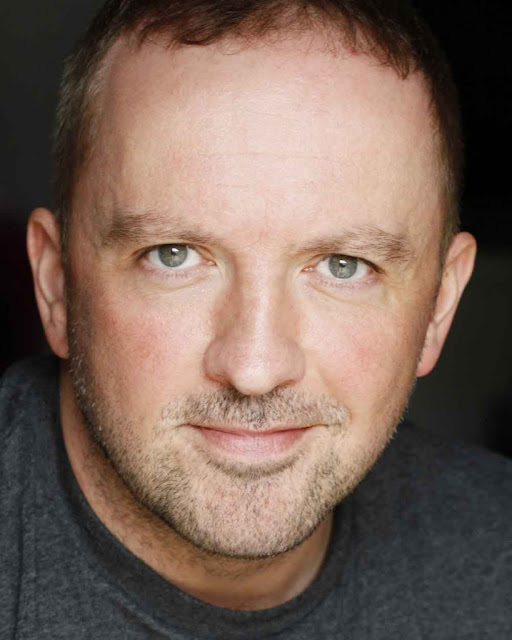 While most actors in Outlander can go to Diana Gabaldon’s novels for their character research, Keith didn’t have that luxury. Lesley is a written-for-tv addition, so we wondered how Keith went about creating his character.

“Well the writers created Lesley really,” Keith replied, “but like any part, you bring yourself to what is written. On a basic level, a  character is very much the sum of what they say and what they do. So you look at what is similar within you and what is different, asking yourself, ‘How can I change myself to suit the character?’ After that, it's about imagination and making sure that you serve the scene or story. It would be too simple to say that Lesley is a comic character. He is fiercely protective of Jamie, Claire and his pal, Hayes. He is brave and willing to get stuck in, always prepared to put himself in harm’s way for them.”

And how would Keith describe Lesley in just 3 words?

“Loyal, witty and earthy,” was his response.

So far, Outlander has traversed different countries and landscapes in order to tell its story. But is there such a thing as a “typical day” on set? We asked Keith if he could share his daily routine with us.

“Well, it starts with an early pick-up,” Keith said. “I’m running over lines in my head through the fog of sleep! When I arrive at the trailer, I put on my basic costume, then head to hair and make-up, where I share a wee chat with the girls to the back-drop of some great tunes. Once I receive my confirmed schedule for the day, I eat breakfast . Then I head onto set to rehearse the scene or run lines whilst the crew set up for the first shot. After that it’s back to wardrobe, hair and make-up for final checks.” 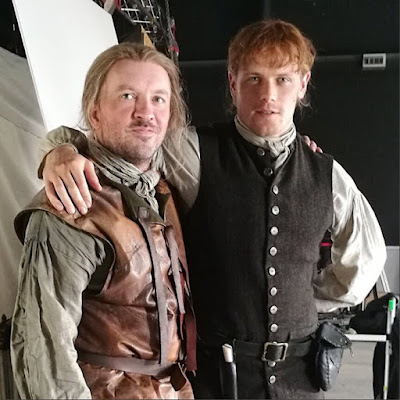 When we asked if there was a lot of specialist make-up for Lesley, Keith answered with the same quick wit that he attributed to his character.

“Of course, you realise that it takes a long time for me in make-up,” he joked, “as it takes a lot of effort to disguise my stunning looks. Before they start on me, you could be forgiven for thinking that Sam and I are twins!!!”

And once this amazing transformation is complete?

“Then we are ready to shoot,” Keith continued. “Hopefully we all know our lines, our intentions, the shape of the scene and the fight choreography, so that it all goes smoothly. Then it's a question of the director giving some feedback, before we do it again with different angles and set-ups. We try to make sure there is no corpsing (breaking character and laughing) before we have lunch and move on to the next scene.”

“The crew are amazing,” Keith agreed. “They work their socks off and look after you so much. They’re a brilliant team...a dream team! Finally it's a wrap, and I can get out of hair and make-up, pick up my schedule for the next day and head home.”

While there are plenty of dramatic scenes in season 3, Lesley and Hayes also appear in one of the funniest - when they encounter the disapproving, goitre-suffering Geordie in the print shop. We asked Keith if he could tell us a bit about that scene.

“Ahhhh yes, the famous print shop scene,” Keith replied, with a grin. “Obviously people mean the 'goitre' bit when they mention it,... surely!! Hahahaha! That scene was a gas. Lorne, the actor who played Geordie, had been given a note to make him more 'sassy'. He interpreted that as 'camper'. I nearly hurt myself trying not to laugh, or trying to make him laugh. I'm not sure if you can catch it, but when I'm looking at Lorne, I'm doing a wee pout. I figured that Lesley would certainly mock him and his prissy, acidic attitude.” 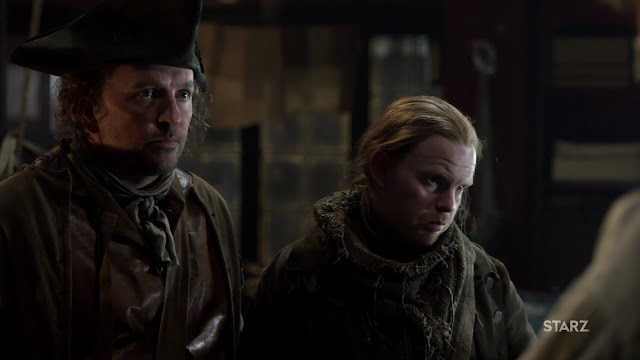 And was there any ad-libbing?

“No,” said Keith, “but perhaps there was the occasional natural reaction and response!”

With such a busy schedule, we asked Keith for his idea of a perfect day.

“A perfect day?” Keith repeated. “Wow, ok. It would begin with breakfast in either Jason Bakery or Clarke’s Bar & Dining Room. (These were two places we frequented in Cape Town.) Then it would be time for some football, watching the Hibs defeat the Jambos or Sevco. They are our main rivals and it’s always a joy to beat them! Next, I’d explore some secrets of the Rye with my pal, whilst sipping an Aviation or a glass of Nuits-Saint-Georges. I’d enjoy the company whilst listening to music - The Beatles, The Stones, or Stone Roses - and open a bottle of fizz. Last of all, I’d have some Chinese and round it off with the best drink of the day - a cup of tea!”

Finally, we asked Keith where he would choose to go if he could travel through the stones.

“I think I would probably go to the 60s,” he answered. “My musical taste is really embedded in that era. I’d love to experience Beatlemania, psychedelia, and that liberation of music, creativity and hope. The world is in such a bad state just now, we need a bit more of the ideology of peace and love. And as for the state of music these days, don't get me started! Obviously I would like to be right in the middle of it if I was back in the 60s, so I'd be a rock star. Maybe the band would be called ‘The Standing Stones’ and our first album would be the ‘Ardsmuir Prison Blues’!!”

Whilst time travelling is probably not on the agenda anytime soon, Keith did suggest another type of Outlander related journey.

“It would be good to get to some of the conventions,” he said,  “so that I can meet you guys.” 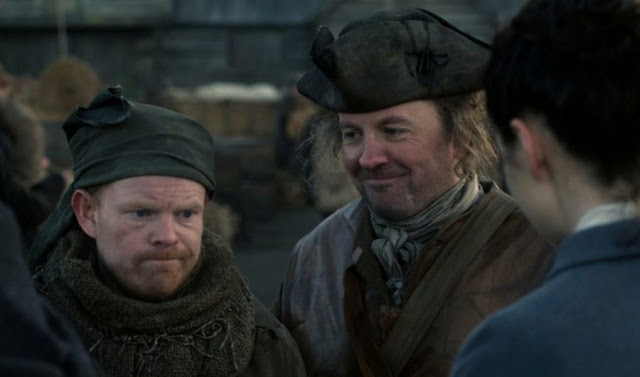 That sounds like a job for the Outlander fans - so who’s up for a challenge? Let’s convince the powers-that-be to get Keith to a convention as soon as we can!

This interview was conducted by Susie Brown, a writer and teacher-librarian who lives in Australia. She’d like to thank Keith for giving up his time and she would definitely buy a copy of the “Ardsmuir Prison Blues”!


Set up and blog layout by Dorianne Panich
Posted by Outlander Homepage at 8:05 PM