This time I chose Donas the Horse (Sue Strickler) @DonasTheHorse, because I have a lot of fun interacting with all the Outlander Animals. They are all creative, funny and sweet, and entertain our fandom. It is a pleasure to learn about the people behind these great Twitter handles. 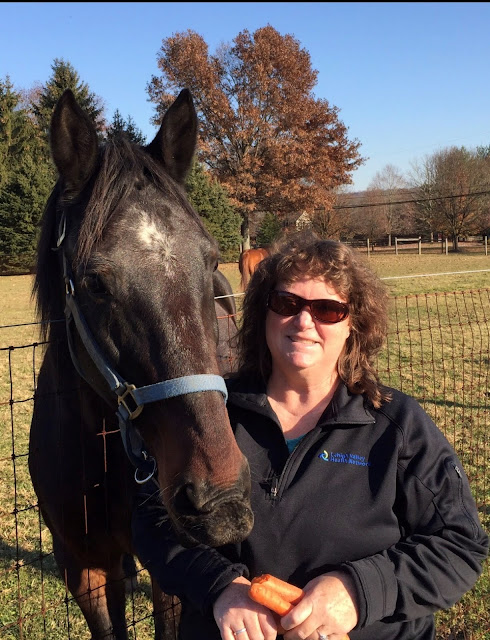 Please tell us about yourself.
My name is Sue Strickler, I am 55 years old and live in the USA, outside of Philadelphia. I work at Lehigh Valley Hospital in the Cardiac Cath Lab/Electrophysiology Lab as a Registered Cardiovascular Invasive Specialist. My hobbies are caring for my 4 dogs, my cat & my 26 year old horse. I’ve had horses most all of my life. I competed in gymkhana, dressage, hunter/jumper, pleasure driving & combined driving. I love to travel (just got back from 10 days in Scotland!), cook, garden and read. I’m am married to my husband, Bob, my high school sweetheart going on 32 years now. He is my Jamie ❤️

What made you decide to choose the “Donas the Horse” Twitter handle and can you tell us a little bit about that? How did it make you feel when Donas did not appear in season 2 of the show?
I have been a huge Outlander fan for a long, long time. When Sam was cast, I joined Twitter and was his 277 follower! I decided to mix my love of horses with my love for Outlander - so Donas was created! I decided to create the cranky, belligerent persona because that’s just how Donas would act, right?! No one was more surprised than me how quickly my followers grew. It helped that Diana, Cait & then Sam followed me as his 666th follow - from there, the followers exploded to 11.3K. Diana direct messaged me before season 1 aired to tell me that they were unable to find a sorrel horse to play Donas and that a black Friesian was going to be used instead. She said it was hard to find a sorrel horse in Scotland that could carry both Sam & Cait, so she & Maril chose the horse you saw in Season 1. I was very surprised and disappointed when they didn’t follow the book and include the barn scene between Jamie & Hamish that includes Donas. I thought it was a missed character development opportunity for those two characters, since it fleshed them out more. As far as being excluded from season 2, I understand that some things need to be minimized and others accentuated, but it was sad that Donas wasn’t around. I was more upset that Donas got the axe in the opening credits!! 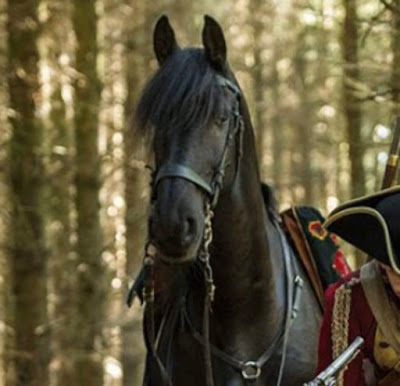 How much time do you spend every day on Outlander?
I used to work part time, so I had a whole lot of more time to devote to Outlander on social media, but that all changed last year when I went full time. I would say I devote about 1-3 hours a week on Donas on Twitter. I’m also an admin on Outlander Fit.

What do you like most about the Outlander books and show?
I love the richly developed characters and the interwoven plots. It’s such a gripping story! I remember binge reading the whole series, and then starting it again. And again! Diana also writes horses so well. She once told me for an article I wrote for Horse Nation on Outlander, that she learned about horses from her father in law (who is an experienced horseman) as well as her husband, Doug.

Which character in Outlander is your favourite (apart from Donas)
My favorite character, other than Donas, is Jamie. He’s the King of Men! He is everything that you’d want in a hero.

How has Outlander affected your life and/or lifestyle?
Outlander has affected my life in so many ways. I never imagined that I would go to Scotland because of a book! Or that I would fly to the first fan event 3000 miles from my home by myself. Or attend San Diego Comic Con! I’d never met any actors before Sam, Cait, Tobias & Graham. There was never a show that captivated me like Outlander has.

Is this the first fandom you are a member of? What made you decide to join this fandom, rather than any other one?
This is the first fandom I’ve been a part of. When all the craziness started in 2013, my family didn’t really understand what all the fuss was about. Now most all of the women in my immediate family are huge fans as are a few of the guys in my family. 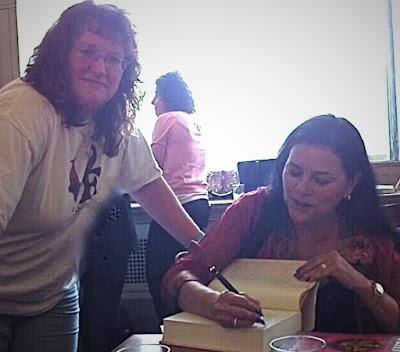 Which personality from Outlander did you enjoy meeting the most? And who would you like to meet as yet?

I enjoyed meeting Sam the most. The first time I met him was at San Diego Comic Con inside the Hard Rock Hotel, right before they did a photo shoot for EW. My friend, Vicky, noticed all of them (the entire cast plus Diana & Ron) coming down the hall towards us. They all turned to get on the elevator and I yelled Sam’s name, and he came out from the back of the pack. 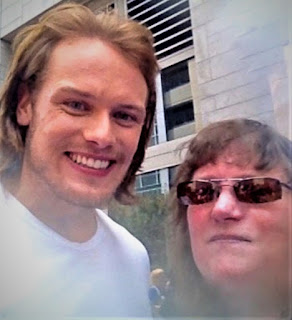 I told him my name & he shook my hand, and said “nice shirt” (I had my Caitrionation shirt on). I told him that he followed me on Twitter, and that I was Donas the Horse, and he broke out in a huge smile and said “DONAS!!!” I asked if I could get a picture, but the elevator came. He told me to wait outside the limo area, and he would find me. So I did, and he found me! I’ve met him a few times now, and he’s always been so nice & accommodating. We actually made it on Japanese TV too, with a group picture of me & my friends! 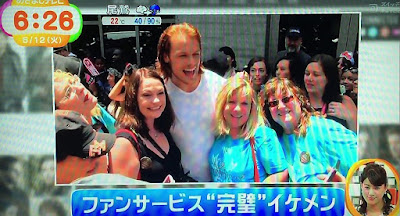 I also met Diana in Philadelphia when she did a book signing. For some reason, I thought it would be funny to wear a horse mask, that I had at the meet & greet. It was kinda funny, but I think Diana thought I was a lunatic! Actually, she was very kind and a good sport! - not my finest moment!! 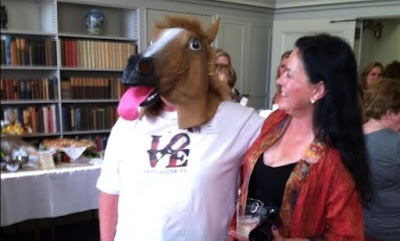 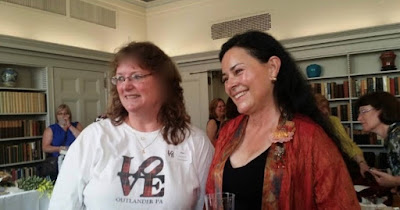 I’ve said Hi to Tobias twice now and, I guess if I had anyone I’d like to meet and talk to more, it would be him. He’s been in so many shows I’ve watched, before he came to Outlander - just recently ‘The Terror’. He seems very nice, so talented and intelligent, but I might be a wee bit scared of him


All graphics and edited formats for this blog by, Dorianne Panich
Posted by Outlander Homepage at 9:02 AM