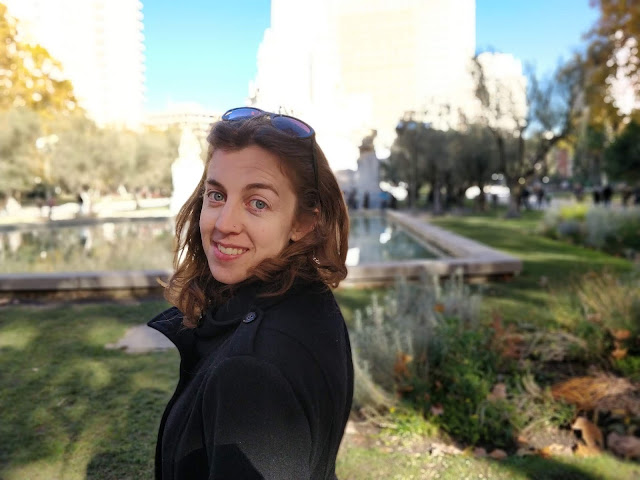 The next interview in the ‘Outlander- the fans who make it” series is with Laura Ewing, who is a graphic designer & illustrator and makes beautiful fan art.

I met Laura through Social media a couple of years ago, when we collaborated on the designs of two of my scarves in the Outlander scarves series that I make. We had some animated conversations via email and via the phone, and it was fun doing those designs. The pictures of the designs are below. 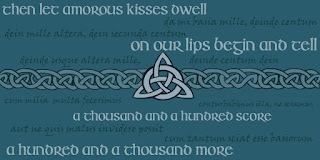 Please tell us about yourself.
My name is Laura Ewing, I'm 29 years old and live in Madrid, Spain. I am part Spanish, part Scottish. This has given me the opportunity to explore very different cultures and landscapes. I usually spend my days drawing, travelling, and in search of yummy food. I'm an illustrator, who loves to play around with characters and the journeys they take. It probably originates from the amazing bedtime stories I got to hear. At the moment, I'm discovering storyboarding and loving the visual narrative tricks I get to pick up along the way. Visually guiding someone along is always a fun challenge.


How long have you been a graphic designer? What made you start doing your edits for Outlander? Which other shows do you make art for?
I was lucky enough to attend a high school that had an art program. There aren't many in my area. It was the perfect solution to my weak academic results. I was never a stellar student, but certain teachers could really bring some decent work out of me. Those usually were the literature and art related subjects. I guess I always wanted to be an illustrator. In reality, I have earned a living as a graphic designer/illustrator for 3 or 4 years, but I have had small jobs here and there since I was 18.

I started doing the edits for Outlander because I was reading the books and could picture the characters so vividly. It was fun to draw things as I read. I started imagining different situations in which the characters would have to face odd challenges in modern life. I guess it made me giggle. It was a great way to combine reading with drawing.

I haven't done as much art for one show as I've done for Outlander. I have a few drawings of Game of Thrones and one or two of The Handmaid's Tale. Harry Potter always pops up for Christmas, too. I guess it just depends on what I've been watching. You can really tell what shows I like just by having a look at my posts on Instagram. I enjoy being a fan :) 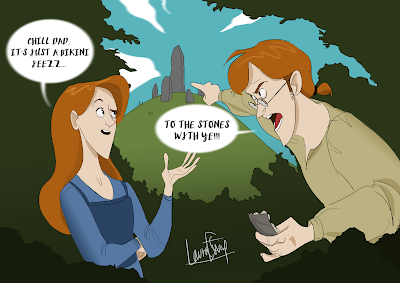 How much time do you spend every day on art for Outlander?
It depends. In the past, I used to draw something every time a fun situation came up in the books. Then I started imagining them in our world. I had a period of time where they were off doing their own things, popping into other shows that I was enjoying at the time, and eventually drew random ideas. I tried to draw something for every episode in season 3, but couldn't really keep up with it. It sometimes felt forced. Now I only draw it if I feel inspired by fans suggestions, or if someone special, like the Southern Sassenachs' charity group, needs drawings for a fundraiser.


What do you like most about the Outlander books and show?
It's always exciting when you find a book you can't put down. It had been a very long time since I'd had that experience. Outlander was a happy mistake. I was looking for something to read and remembered a show called Highlander. I bought Outlander thinking it was connected. To my surprise I LOVED every second of it. I got to learn about Scottish history in a way I never had before, and share facts I'd learned with my Scottish father.

I love the story in the books, the rich characters and plots. I am thrilled the TV show has really kept the magic from the books alive. The music and cinematography really help it come together in an epic way. It makes me proud of my Scottish roots. 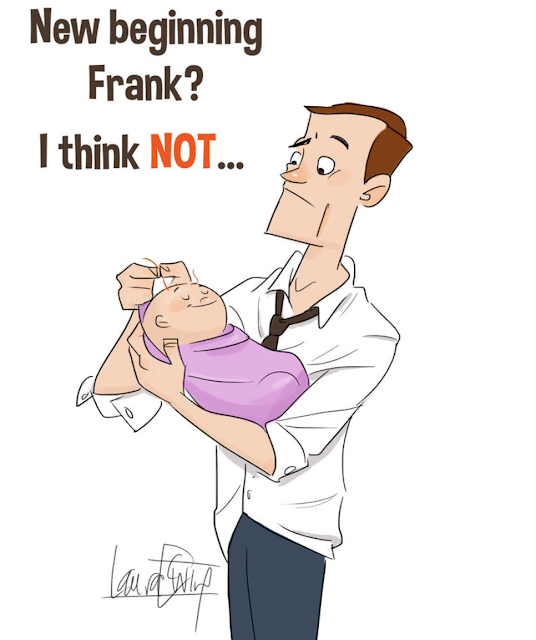 Which character in Outlander is your favourite?
I love Claire's character. She's an outsider. I felt that she was similar to me in that way. My visits to Scotland were always as a young foreign girl. I had a different accent, but loved spending my summers there. Claire finds a way to fit in, and is such a brilliant and strong woman. A great role model for many girls out there. Plus, she can hold her whisky! (That is not something I have ever mastered)


How has Outlander affected your life and/or lifestyle?
It has affected me in many ways. It connected me to my roots. It gave me an amazing fan art experience and it also made me want to study storyboarding and camera work. The show is of great quality, with amazing acting and commitment to the books. Bringing something as gorgeous as that to the screen is a work of art in itself, and has made me want to be part of a production team that makes things like that happen. 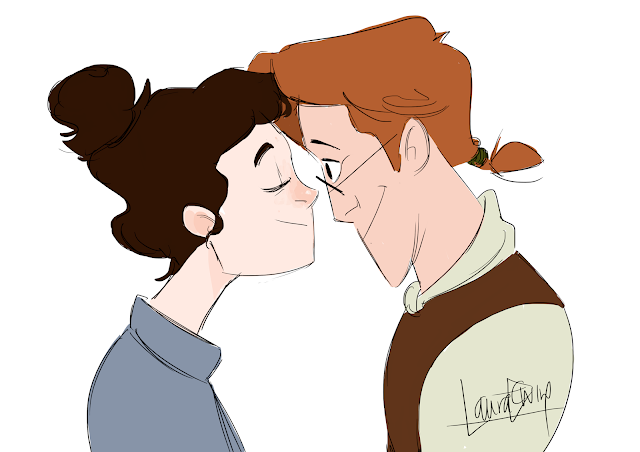 Is this the first fandom you are a member of? What made you decide to join this fandom, rather than any other one?
I was (still am) a real Potterhead. That was my first fandom. I followed it like crazy. There was an artist call Tealin who was my idol. She (I think it was a she) posted all sorts of Harry Potter fan art. As a teenager, I would spend my days trying to draw like her. When Outlander came along I just started drawing the characters. Somehow people found my work online and seemed to like it. I got invited to the Fandom and discovered the passion and love everyone has for the books. It has been amazing to be a part of it.
Have you met any of the actors from Outlander, or Diana? If so, which personality from the Outlander stories did you enjoy meeting the most? If not, who most would you like to meet?
I sadly haven't met anyone in person BUT I have been lucky enough to receive nice. tweets from Duncan Lacroix and Diana herself. I bounced around when I saw those. I was also lucky enough to design Matthew B. Robert's logo on Instagram. That has been thanks to the amazing comments people have made and the encouragement I've received.

I have no idea who I'd like to meet. Everyone in that cast is AMAZING. I guess if I were to choose, it would be Cesar Domboy. He came in later, and was able to expand on a character that we had already grown to love. It can't have been an easy role to portray. I've loved drawing his character. 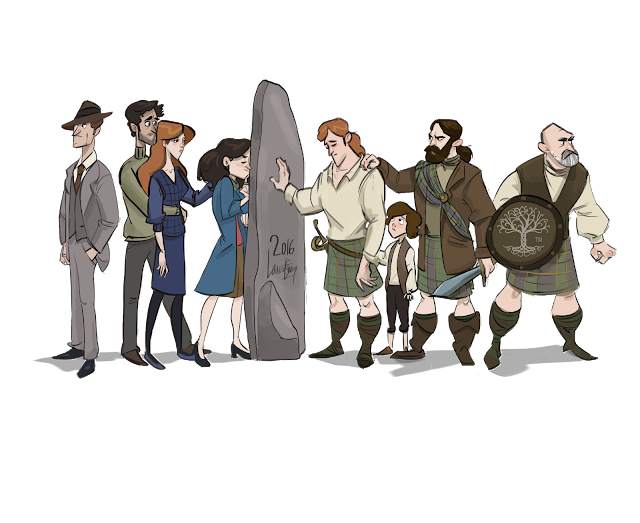 Please tell us how you got involved in the Southern Sassenachs charity?I've always liked working with charities. I've volunteered my whole life, and this is one more way to be able to contribute to a great cause. I received an email from the Southern Sassenachs', asking if I would be willing to donate some work and help raise money for a great cause. It was a fun challenge to try and design something Outlander fans might like, while knowing that all proceeds were donated to charity.

It started as a one-off, but it has now become somewhat of a tradition each year. It's fun to figure out something that introduces old and new characters in ways that suit the plot for each season.


What keeps you connected to the Outlander fandom?
I guess I feel the connection more when the charity is raising money with my drawings. When people contact me because they've seen Outlander designs, and want to get a drawing of their friends surrounding Jamie (for example), or at fun times when someone in the fandom sends me something I might enjoy on Twitter.

I love all those interactions. It's amazing to be thinking of a scene for a drawing, and being able to ask a question about something really specific on Twitter and have an answer that's bang on. The Outlander fandom is unreal. 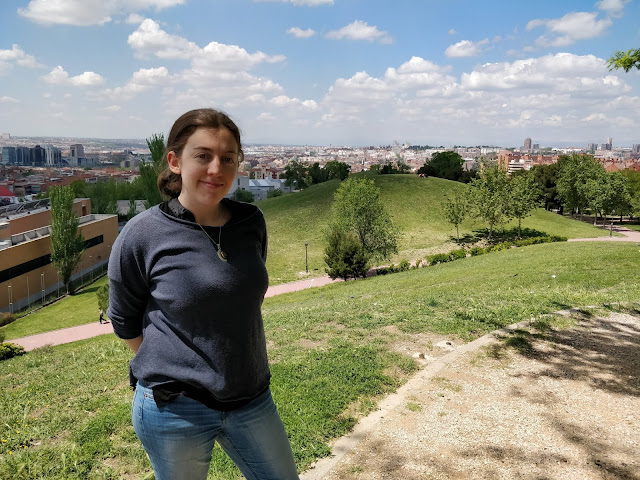 What do you have coming up next?
I'm not sure. I thought of a book with a lot of the Outlander drawings I've been posting during the years (with new ones of course), but I've not had a chance to really plan it out. We'll see.

Below are all the ways for people to find me on Social media:


All graphics and edited formats for this blog by,  Dorianne Panich
Posted by Outlander Homepage at 10:18 AM