My next interview in the ‘Outlander- the fans who make it’ series is with Nancy Roach, otherwise known as “The White Sow” on twitter.
I have enjoyed the White Sow’s edits and Gifs and videos from the start; they are very entertaining.
The person behind the alias is just as interesting, so I hope you enjoy this interview. 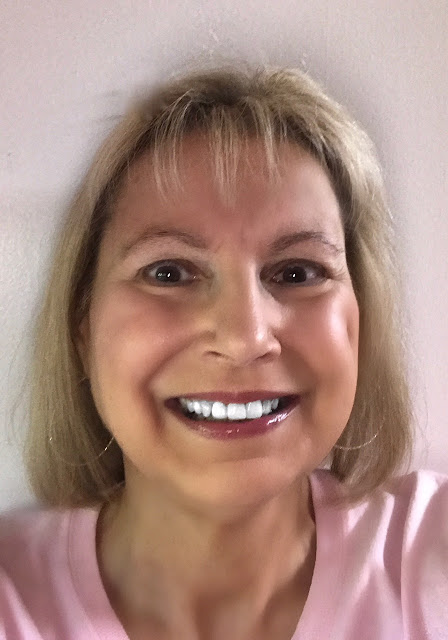 Please tell us about yourself.
My name is Nancy Roach. I’m 64, and a retired Director of Volunteer Services from Cape Fear Valley Health System in the US. I have way too many hobbies. Past hobbies include acting in community theater, playing the guitar, performing in a folk singing group in Middle and High School, drawing and visual art, knitting, restoring, researching and collecting dolls (I went to graduate school to become a curator of dolls at a children’s museum, but decided not to pursue this), collecting jewelry and faceted gem stones, researching family history, reading, and now, I’m addicted to the Outlander books and television series.


What made you decide to choose the “White Sow” twitter handle and can you tell us a little bit about that?
First of all, I don’t own a pig. I get asked that a lot. The pig is a figment of my imagination. I joined Twitter in August 2016, connecting with other Outlander fans, and quickly became a fan of @SummerPic /@purpleiris13‘s Poptoons and @beachcrazy70’s reenactments of Outlander scenes, with her extensive Barbie doll collection. I loved the idea that other fans were representing animals from the books on Twitter, i.e. Donas the Horse, Clarence the Mule, Adso the Cheetie, etc. In November, I asked if anyone had taken the White Sow character on Twitter. Fortunately, no one had, so I rushed to create an account and started tweeting that night. I developed a Facebook page for her too.

The White Sow is an outlet for my sense of humor. Laughter and creativity are my survival mechanisms. When I’m the pig, I try to make myself laugh. Try explaining to your family and friends, who know nothing of the series, why you’re a pig on Twitter!


How much time do you spend every day on Outlander?
I probably spend too much time. I make videos and gifs, using an app called Framy, a photo editing app, and a movie app. This can take quite a lot of time to create. My first creation was a YouTube video retelling of the print shop scene from the White Sow’s point of view.

Of course, the peanut butter and jelly sandwich Claire took back with her through the stones was a focal point for the White Sow and her voracious appetite. When Season 3 began, I did a Framy video summary of most of the segments that lead up to the print shop episode.

I have to admit I get “lost” in the process. I really enjoyed creating this gif of Fraser’s Ridge. I also photo shop the pig a lot with members of the cast.

Lately I’ve been experimenting with a Talking Pets app, so the White Sow can talk and sing. The latest one is attached below.

I’m also one of the administrators for the Outlander North Carolina Facebook group, founded by Beth Pittman, for Outlander fans all around the world who are interested in our state as it relates to the books.

We are currently working on our first big event “A Fraser’s Ridge Homecoming”, on September 20-23 in Ferguson, NC. Our event is designed to give attendees the experience of Fraser’s Ridge, complete with the beautiful fall scenery of the North Carolina Mountains.

We have a limited number of tickets. For more information click on this link.


What do you like most about the Outlander books and show?
I love historical fiction. These books have that, plus a wonderful romantic element. However, it’s the words that hold me captive. Diana Gabaldon writes with such intelligence, and of course, a sense of humor. I love to read, but I don’t think I’ll ever find an author whose writing I love more than DG.
I also love watching the Television series, to see how elements of the book are worked into the screen story. Casting for the show has been spot on. I’ve fallen in love with all of the actors and their amazing talents, as well as the authentic sets, costuming, and scenery that complete the picture. Starz has a hit on their hands, and will be smart to continue to fund additional seasons.


Which character in Outlander is your favourite (apart from the Sow)? Well, (sigh), I have to admit, it is James Alexander Malcolm MacKenzie Fraser “Himself”. I don’t have a husband, but I can live vicariously through the relationship between Claire and Jamie. It doesn’t hurt that Sexy Sam Heughan plays the role in the series. 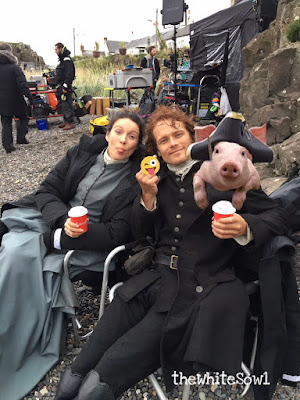 How has Outlander affected your life and/or lifestyle?
Unfortunately, I’m obsessed with Outlander, and everything about it. In September last year, I was thrilled to meet Diana Gabaldon at the Bookmarks event in Winston Salem, NC, and get her to sign a copy of Drums of Autumn to the White Sow.


Is this the first fandom you are a member of? What made you decide to join this fandom, rather than any other one?
When I was a young teen I was obsessed with the Beatles, Monkees, Leonard Whiting from Romeo and Juliet, etc., but this fandom goes way beyond that. I first read Outlander after my mother died. I sobbed throughout the book, especially at the ending. I was my mother’s primary caregiver. She died in my home, and it was an emotional roller coaster. Outlander helped me through the grieving process, and was very cathartic for me. When I finished Outlander, I immediately downloaded Voyager on my Kindle, and couldn’t stop until I’d devoured the whole series, reread it, and downloaded the audible version. Although I loved my laptop and Kindle, social media was an alien creature I feared, and looked upon with distain. OK, Outlander made me drink the Kool Aid. Now I’m addicted.


Have you been to any Outlander fan events or Cons and met any of the actors or Diana? Who would you want to meet?
The only thing I could afford was the Bookmarks event in Winston Salem, NC in September 2017. Diana was the closing speaker. I was thrilled to meet her briefly and have her sign my books to the White Sow.

I would love to meet Sam someday. 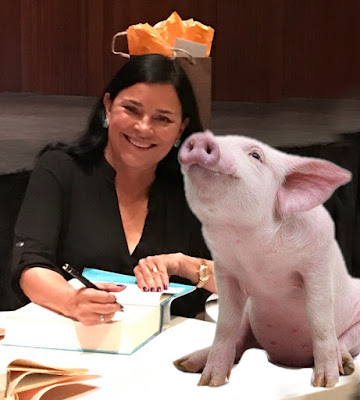 What keeps you connected to the Outlander fandom?
Facebook and Twitter Outlander fans, Diana and actors on Twitter, the TV series and of course rereading all of the novels.


What do you have coming up next?
Good question. The Framy app I have been using changed completely in May, with their latest upgrade. Gone are all of the fun editing features, characters, animals, plants, special effects, etc. that you could add to your videos. Right now I’m trying to find some alternatives and doing some Talking Pet videos. I would like to design a White Sow T-shirt in the future.

All graphics and edited formats for this blog by,  Dorianne Panich
Posted by Outlander Homepage at 8:03 AM