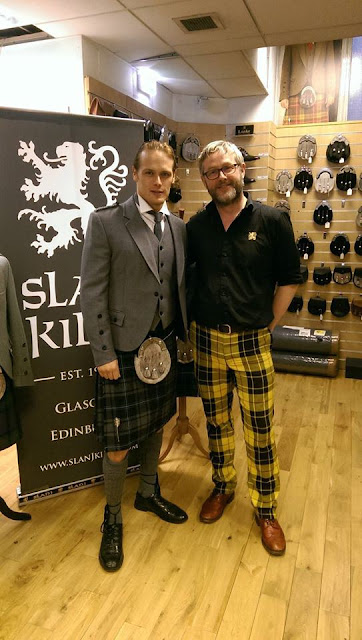 Today the big, some what shocking announcement that Sam Heughan will be the Grand Marshall for the 18th annual New York City Tartan Day Parade. (Sam's a busy guy)

The Parade is organized by The National Tartan Day New York Committee. The St Andrews Society of the State of New York, the New York Caledonian Club, The American-Scottish Foundation and Clan Campbell.

The parade will be marching down 6th Avenue, on April 9th 2016. At 2pm.
Other events for the week long New York Tartan Week, will run from April 2nd until April 10th.

Outlander fans will be in full force to show support for the Scots we all fell in love with from Diana Gabaldon's books, and Sam Heughan from the Outlander series, all over New York City that week.

Claire MacKay, the Herbalist from the Starz series Outlander, will be hosting a seminar on her Herbal remedies. Check her Twitter for the details @ClaireHerbal

What SAM HEUGHAN said
“As Grand Marshall of the New York Tartan Day parade 2016, I am honored and proud to serve the city and its ancestral ties. I love the city, the people and the vibe. Please join me in toasting all who live and visit there with a whisky and a toast!”


About some of the parade attendees and events:
Scotland Run in Central Park, a Pre-Parade Ceilidh, Pipers, Dancers, Clans of Scotland, The United States and Canada will be in the parade. Also, lots of Scottish and West Highland Terriers, (yes that's correct, the dogs are a comin...)
The Edinburgh Academy Pipe Band, Strathallan School Pipe Band, The 2016 Up Helly Aa Jarl Squad, and many more....

http://nyctartanweek.org
Posted by Outlander Homepage at 10:49 AM