Outlanderhomepage Originals
By Kim Murphy-Winslow
Dragonfly in Amber - Chapter 7
Jamie rose in the cold, black dark and dressed himself for the long ride to Versaillies, to attend the King's Lever. Louie awoke punctually at six o'clock every morning. At this hour, the favored few chosen to attend the King's toilette should be assembled in the antechamber, ready to join the procession of nobles and attendance who were necessary to assist the monarch in greeting the new day. 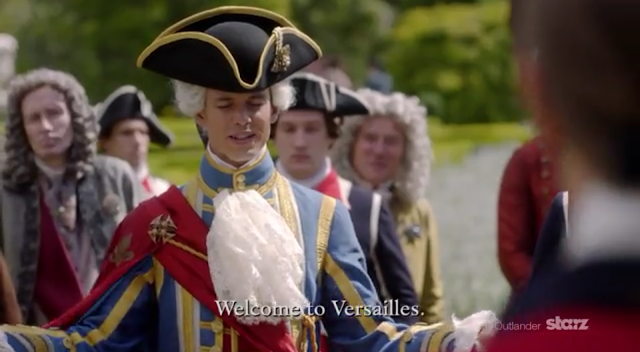 The Levee (from the French word Lever, meaning "getting up" or "rising") was traditionally an opportunity for the King's subjects and nobles to have intimate access to the King. There were 2 different degrees of Levers. The "Grand Lever" which was attended by the full court in a gallery outside the King's bedchamber and the "Petit Lever" which was only attended by a very select few, usually by invitation. Louis did, in fact, rise early. It's said that he was not a very good sleeper and was a notorious early riser. It was seen as an honor to have such an intimate moment with the monarch. Attendees would be asked to help dress, wash, etc. the King or Queen (yes, the Queen had her very own Lever) or assist by holding the mirror in place while another brushed his/her hair. 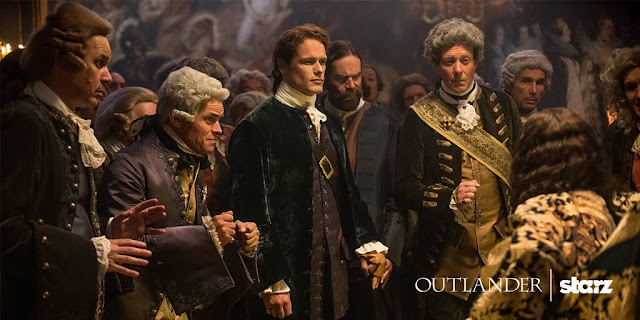 Dragonfly in Amber - Chapter 7
“And how was the King’s lever?” I asked, coming to help Jamie remove his coat. Wearing the tight pigskin gloves de rigueur at Court, he couldn’t manage the crested silver buttons on the slippery velvet. “Oh, that feels better,” he said, flexing his broad shoulders in relief as the buttons sprang free. The coat was much too tight in the shoulders; peeling him out of it was like shelling an egg. “Interesting, Sassenach,” he said, in answer to my question, “at least for the first hour or so.” As the procession of nobles came into the Royal Bedchamber, each bearing his ceremonial implement— towel, razor, alecup, royal seal, etc.— the gentlemen of the bedchamber drew back the heavy curtains that kept out the dawn, unveiled the draperies of the great bed of state, and exposed the face of le roi Louis to the interested eye of the rising sun. Assisted to a sitting position on the edge of his bed, the King had sat yawning and scratching his stubbled chin while his attendants pulled a silk robe, heavy with embroidery of silver and gold, over the royal shoulders, and knelt to strip off the heavy felt stockings in which the King slept, to be replaced with hose of lighter silk, and soft slippers lined with rabbit fur. One by one, the nobles of the court came to kneel at the feet of their sovereign, to greet him respectfully and ask how His Majesty had passed the night? “Not verra well, I should say,” Jamie broke off to observe here. “He looked like he’d slept little more than an hour or two, and bad dreams with it.” Despite bloodshot eyes and drooping jowls, His Majesty had nodded graciously to his courtiers, then risen slowly to his feet and bowed to those favored guests hovering in the back of the chamber. A dispirited wave of the hand summoned a gentleman of the bedchamber, who led His Majesty to the waiting chair, where he sat with closed eyes, enjoying the ministrations of his attendants , while the visitors were led forward one at a time by the Duc d’Orléans, to kneel before the King and offer a few words of greeting. Formal petitions would be offered a little later, when there was a chance of Louis being awake enough to hear them. “I wasna there for petitioning, but only as a mark of favor,” Jamie explained, “so I just knelt and said, ‘Good morning, Your Majesty,’ while the Duc told the King who I was.”“Did the King say anything to you?” I asked. Jamie grinned , hands linked behind his head as he stretched. “Oh, aye. He opened one eye and looked at me as though he didna believe it.” One eye still open, Louis had surveyed his visitor with a sort of dim interest, then remarked, “Big, aren’t you?” “I said, ‘Yes, Your Majesty,’” Jamie said. “Then he said, ‘Can you dance?’ and I said I could. Then he shut his eye again, and the Duc motioned me back.” Introductions complete , the gentlemen of the bedchamber, ceremoniously assisted by the chief nobles, had then proceeded to make the King’s toilette. As they did so, the various petitioners came forward at the beckoning of the Duc d’Orléans, to murmur into the King’s ear as he twisted his head to accommodate the razor, or bent his neck to have his wig adjusted. “Oh? And were you honored by being allowed to blow His Majesty’s nose for him?” I asked. Jamie grinned, stretching his linked hands until the knuckles cracked. “No, thank God. I skulked about against the wardrobe, trying to look like part of the furniture, wi’ the bitty wee comtes and ducs all glancing at me out of the sides of their eyes as though Scottishness were catching.”“Well, at least you were tall enough to see everything?”“Oh, aye. That I did, even when he eased himself on his chaise percée.”“He really did that? In front of everyone?” I was fascinated. I’d read about it, of course, but found it difficult to believe. “Oh, aye , and everyone behaving just as they did when he washed his face and blew his nose. The Duc de Neve had the unspeakable honor,” he added ironically, “of wiping His Majesty’s arse for him. I didna notice what they did wi’ the towel; took it out and had it gilded, no doubt.

The thought of being bombarded by people that had a million questions and favors to ask of me, first thing in the morning, would be some kind of nightmare. The Royal's that practiced the custom didn't think so. They may not have liked it, but it was tradition, and a very important ceremony, partly because it was a political move on the monarchs part, making them seem more "down to earth"...so to speak, though EVERYONE knew they weren't. Though you were born to be King, you still wanted your subject to like you and speak highly of you. Inviting them into your bedchamber was a way of doing that and gave the attendee the feeling of importance, which tricked down through the court. A very tangled web "Court" was. I can not wait to see it come to like in Season 2. From the teasers and shots that Outlanderhomepage has been posting, I can not wait to see "Dragonfly in Amber" come to life in the spring.

More on the Levee:
we found a great blog with lots of info on this subject.

The Lever, Coucher, and More: A Day in the
Life of a French King

Here is a sample:

Your eyes flutter open, sight still hazy with the fuzziness of sleep. At eight o’clock, the curtains around your bed--sequestered as it is in a gold balustrade alcove—are thrown open by your valet de chambre, the one man to have slept in the same room as you. Your childhood nurse bends gingerly down over you, placing a kiss upon your forehead as the chief physician and the chief surgeon look on. Your chamber pot is removed and the curtains are drawn. You wait.

At a quarter past the hour, the curtains are opened once more. Now the Grand Chamberlain is allowed entrée, bringing with him only those who has kowtowed the most exuberantly, curried the most favor—only those whom you have deemed worthy to experience the privilege of watching you rise. You are the King of France, and your lever(rising ceremony) continues.

For more details from The Courtiers secret:
http://donnarussomorin.blogspot.com/2010/08/lever-coucher-and-more-day-in-life-of.html
Posted by Outlander Homepage at 9:30 AM