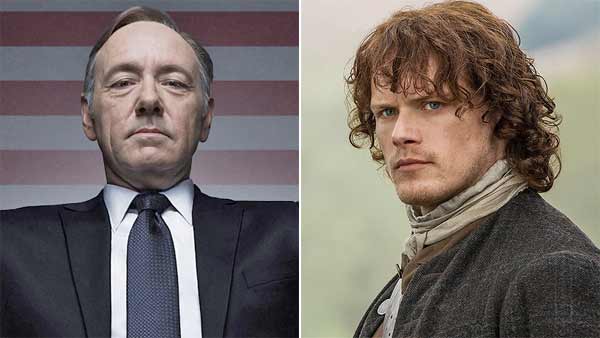 Now that Kevin Spacey ("House of Cards") is finally a favorite in the eyes of Golden Globes voters -- he prevailed last year on his eighth career bid -- can he score back-to-back trophies? Or might an underdog like Sam Heughan ("Outlander") pull off a Golden Globes jawdropper? Hurry -- make your own predictions for a chance to win a $100 Amazon gift certificate. It's fun and easy, so get started by scrolling down to predict who will win the Globe for Best TV Drama Actor.

According to exclusive Gold Derby odds that are derived from the predictions made by our Editors (website staff editors), Top 24 Users (the two dozen folks who did the best predicting last year's nominations) and other Users just like you, Spacey currently leads this TV race with 9/2 odds, followed by Heughan in second place with odds of 6/1.

As for Heughan, this international TV sensation ticks a lot of boxes for Golden Globe voters. Remember, these awards are given out by the Hollywood Foreign Press Assn. That's key because the people voting for the Globes love to trumpet new hot stars like Scottish-born Heughan for their media outlets across the world, and "Outlander" is one of Starz's all-time biggest success stories.

Make your Golden Globe predictionsstarting with Best TV Drama Actor to the right or at the bottom of this post and earn aplace of honor on our leaderboard and a starring role in next year's Top 24 Users (the two dozen folks who do the best predicting last year's Globe nominations).

Last year the Expertsled the way with an accuracy rate of 67% when it came to predicting the Golden Globe TV nominations, followed by all Users with 65%, the Top 24 Users at 63% and the Editors at 61%. (Click on any of these groups to see what they got right and wrong last year.) Which group will be victorious this year?

As some of our Users turn out to be our smartest prognosticators, it's important that you give us your predictions. Your picks influence our Users racetrack odds, which also factor into our official combined odds.
Posted by Outlander Homepage at 9:21 PM