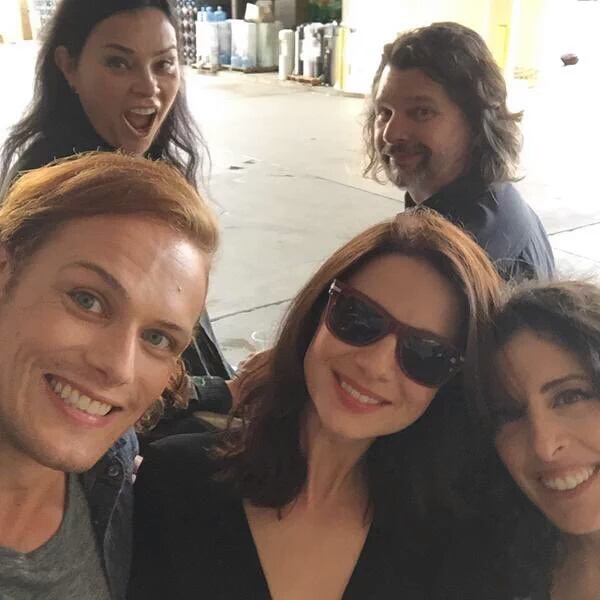 Outlander creator Diana Gabaldon on kilts, sex appeal and her army of fans!

DIANA is the quiet American academic behind Outlander but the literary phenomenon is far more than a mere bonk-buster, which explains its growing appeal she says.

EPIC Scottish scenery, seductive Highland warriors and a love triangle with a time travelling twist – it can only mean Outlander.
If you haven’t already heard of the fantasy historical novels you soon will.
America production company Starz TV has adapted the first of the best- selling eight-book series and countries around the world are snapping up the rights.

All except Scotland, where rumours suggest TV chiefs are waiting until after the independence referendum before they snap up the potentially inflammatory series.Filmed in the Highlands, Outlander has boosted the Scottish tourism industry, spawned a legion of devoted fans and rocketed the sex appeal of men in kilts.

But this historically rich drama, set around the Jacobite uprising, was written in Phoenix, Arizona, by American Diana Gabaldon before she’d ever set foot in Scotland.
We speak by phone from her home where it’s the middle of night and she in ensconced in her study while husband Doug, her partner of 42 years, sleeps next door.
The hours between midnight and 4am are her writing time, but these days it’s when Diana fields calls from journalists in different time zones.
But her life before Outlander sold 25 million copies worldwide and became a £50 million TV production couldn’t have been more different.

Diana was a university professor, with several degrees, a PHD, and three young children, who supplemented her income by writing scientific journals.

“I knew from a very early age that I was meant to be a novelist,” she says. “But I came from a very conservative family background and my father would say to me, you’re such a poor judge of character you’re bound to marry a bum so be sure to get a good education so you can support your children.

“When I turned 35 I decided to write a book for practice.”
Taking inspiration from an early Dr Who programme, which featured a Scotsman from 1745, Diana researched her subject thoroughly, and the result was Outlander.
“It took me about 18 months to finish the novel and much to my astonishment it sold right away.”
An indescribable book by an unknown author, it was not a huge overnight hit.

“It’s been a very gradual process,” she says. “A very slow incremental growth from book to book but the TV show has unleashed a new level of visibility.”

As Diana’s fame has grown the unassuming academic has learned how to handle the increasing demand from media and social media, where fans have lengthy debates on how to pronounce ‘plaid’ for instance.

So much so that Sam Heughan and Caitriona Balfe, the young stars of the TV production, looked to Diana for advice.

It was always going to be different for them, she says: “Dropped in at the deep end - luckily both are professional enough to do well with it.”

When the 8th book in the series was released in June, Diana embarked on a book tour of the US and Canada, before the premiere of the show in San Diego.

“I feel like I’ve been on the run all summer and yes I do miss my regular life,” she says.
“I miss my husband. He stays at home and I get to see him once a week for my brief touchdown for fresh underwear.”

This week she arrived in Scotland for the Edinburgh Book festival, but at least Doug got to come along.
It’s also an opportunity to catch up with their youngest daughter Jenny, 28, who now lives in Edinburgh after marrying a Scotsman.

Was she, like millions of other women, seduced by Outlander’s hunk Jamie Fraser?

“No, none of my children have read by books,’ says Diana.

“As my eldest, who is an operating room nurse says, ‘why would I read sex scenes written by my mother’.
“But they do know what Jamie Fraser looks like as their father is also very tall and a red head.”

Now Outlander has triggered a tourism boost in Scotland, with tours to key locations from the story about post war nurse Claire Randall and her time travel back to the 1700s via standing stones.

“I’m thrilled that its worked out so well and I’m gratified to have been of some benefit to Scotland because it has certainly been good to me and its nice to give something back,” says Diana.
“We are certainly looking for a UK TV provider to pick up the show because it doesn’t feel right that the UK doesn’t get to see when it is actually made there.
“The international rights belong to the Sony Corporation and I understand that talks are underway.”

Famously generous with her time for her supporters, earlier this week, at a dinner organized by fan group Outlandish UK, Diana posed for pictures with a life-size cardboard Jamie Fraser which at 6ft 3 towered over the diminutive author.

Then she recalled how a German interviewer had asked what was so appealing about a man in a kilt.

“I suppose it’s the idea that you could be up against a wall with him in a minute,” she laughed, adding: “And a man in a kilt will always be more appealing than anyone in lederhosen.”