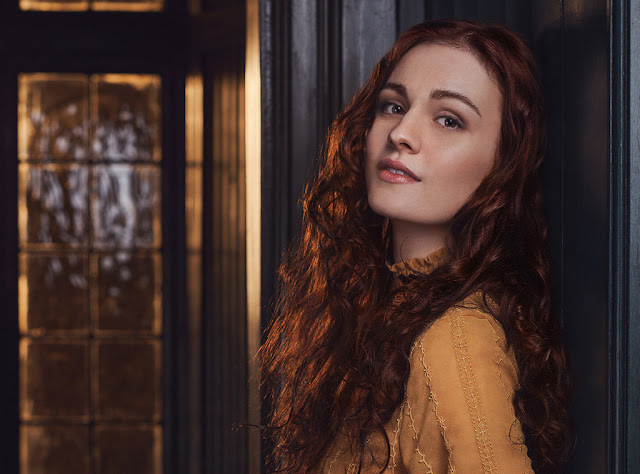 Outlander fans, we'd like to officially introduce you to your Brianna. Warning: major Outlander book spoilers ahead! If you don't want to be spoiled on a major season two and beyond storyline, avert your eyes now...

Sophie Skelton has landed the coveted and buzzed-about role of Jamie (Sam Heughan) and Claire's (Caitriona Balfe) daughter in the upcoming second season of the Starz hit, E! News has confirmed.

A striking redheaded lady, Brianna is strong-minded and intelligent beyond her years (traits inherited from both of her parents, of course!) and she has a distinctly scholastic mind-set....and a healthy dose of Fraser stubbornness, per Starz.

But wait, how do Jamie and Claire have a 20-year-old daughter, you might be asking?! (AGAIN, spoilers ahoy!)

Back in August, we asked executive producer Ronald D. Moore about casting Jamie and Claire's kids, and he told us that they were planning on taking their time to find the perfect actors to take on Brianna as well as Jamie and Claire's adopted son Fergus, who's about 10 when we meet him in France in 1744. And he also said there wasn't a strict list of requirements when it came to the casting process.

Well, as all fans of Diana Gabaldon's epic book series know, season two is based on the second book, Dragonfly in Amber, which includes a huge time jump.

"There's no one particular thing that you're looking for in any of these roles, except that when they get on camera, they kind of become that character and they lose themselves in the role," he said. "It's just one of those things that you just know it when you see it. When you see the tape, you just sort of sit up and go, ‘Oh my god!' It's an ineffable quality that the right actor with the right role can bring to the show."

Skelton, best known for her work on Foyle's War, isn't season two's only newcomer: We exclusively reported that Stanley Weber (pictured above) will play Compte St. Germain, a wine merchant and member of the French Court, while Richard Rankin is set to play Roger Wakefield, the adult version of Reverend Wakefield's son and Harry Potter star Frances De La Tour will take on the role of Mother Hildegarde.

Plus, two other family members will be introduced: Scottish actor Robert Cavanahwill be playing Jared, Jamie's cousin who they will meet in France, and Laurence Dobiesz will take on the role of Alex, Black Jack's brother.

Outlander returns to Starz this April.

Posted by Outlander Homepage at 5:29 PM