A great theory of colors, fabrics, textures, and the mood of Claires wardrobe for Outlander season two. 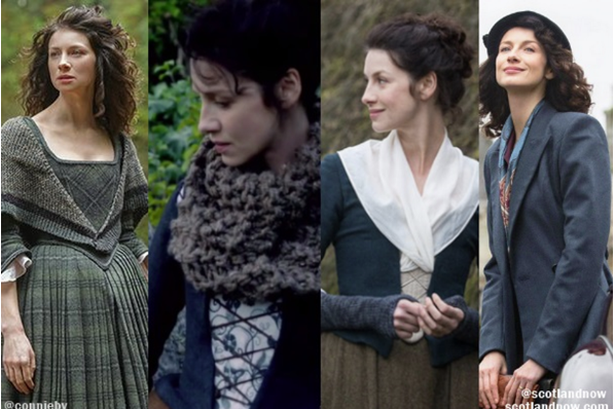 Our Outlander obsessive Connie Verzak continues to beat the Droughtlander blues by examining heroine Claire's costumes and the significance of each outfit.
By Scotland now.

I have a very visual mind, and it is one that is very easily distracted like a drunken magpie watching a showgirl cross the street into a theater.

My brain notes details and files them away, and every so often these cogitate into something that seems like a pattern.

So it has happened that I have had several thoughts nag me upon seeing the slow reveal of costumes for Season Two of Outlander and inspired by the genius that were Tom and Lorenzo’s Mad Style posts, (if you are a costume aficionado, please read those. LATER) I decided to share my theories on the visual themes in Claire’s costuming.

Disclaimer: these are just organized wild guesses; I have no inside knowledge or even knowledge of period-specific fashion, really. As always, book spoilers will be overtly nodded at, if not outright pointed to.

Since the moment she arrived in Scotland, Claire’s signature color has been brown. While traditionally thought a dull color, the browns she wears are like her hair: varied and complex. Not only did brown tie her into the muted tones of the Scottish landscape, but through its warmth it also tied her to the man who would one day become her second husband. Brown wasn’t only symbolic of Claire’s coloring, but of the earth and the herbal basis of her healing talent.

Her costumes blend with the land as opposed to say, Geillis’s, who with their unorthodox trimmings and accessories are meant to signal the nonconformity of their owner. These themes follow her into Season Two.

Upon her presumed arrival in Paris, Claire wears the same gown (with a different stomacher) she wore upon departing Scotland, and while it has a very obvious blue-green accent cloak (more on that later), its muted tones and her loose hair are a welcome back of sorts to the character.

Somewhat curiously, the colors she wore during the search for the missing Jamie (blue bodice, brown skirt and cloak) are almost inverted here. Claire has found her Jamie both physically and emotionally and they are a unit once more.

Interesting detail: when Claire first begins to dress in period gowns, her stomacher is plain. Over time, the stomachers of her gowns appear decorated with floral and herbal motifs, as this one is here. As her skills as a healer become an established part of her identity in her new marriage, so are they displayed on her clothes.

It is almost as if it is the insignia of her superpower.

Their unity continues to be highlighted in two more outfits. First, what we can assume is a formal court dress in a wine-like color (not the famous red dress from the books) provides a rich backdrop for her formally dressed dark brown hair and her white crystal pendant.

The fabric accenting her sleeves is also brown, almost exactly matching her hair. The effect is simple elegance. Claire is the wife of an 18 century laird, but this has a simplicity of cut and adornment that reminds you she is a woman that originated from the classic, clean lines of the mid-twentieth century.

The same palette is alluded to in Jamie’s outfit, from the red of his hair to the ivory and brown of his coat and waistcoat. Although not exactly matched, this is very obviously a couple that is on the same page. As a palette, red/brown is a weighty one and the fact that the crystal Claire wears is meant to protect her from poison becomes more meaningful in its symbolism. Remember the last time Claire was depicted almost exclusively in these colors?

That sense of unity is underlined in this next outfit. Either because of a deliberate choice by costume designer Terry Dresbach or the lighting (or both), the Frasers seem to be wearing not only the same color, but almost the same material. The clothing is simple, unadorned, and seemingly what one would wear around the house.

The brown and white recalls an almost puritan simplicity and sense of purpose. All this is magnified by the visual impact of Claire’s advanced pregnancy. At no other time is a woman more tied to Mother Earth than when she herself is creating life. Every visual cue ties these two people together, but it is so bolded and marked that I almost feel it is a bad omen, a warning. The only reason to tie two people together so notably is to maximize the impact of pulling them apart.

Going back to a point I raised earlier, Claire has been in cooler-toned hues during times of change in her life. Blues and greys are momentous. She tends to favor greys in times of commitments, such as both her weddings. Also notable are colors in the blue-green range.

Her coat, upon arriving in Scotland, was that vibrant blue that stood out starkly from the scenery.

The dress she wore to marry Jamie was a silvery grey, the plaid gown she wore when she agreed to marry him (and when she stood next to him to greet his tenants at Lallybroch as mistress) was a green/blue plaid. In moments where the cooler tones are highlighted over the earth ones, they seem to signify movement and change. Claire is the Earth, true, but because she traveled from another time, she is also the “billow and breeze, islands and seas/mountains of rain and sun” from the Skye Boat song. Claire’s blue is a visual cue of her otherness, as are certain unique design elements in her gowns, such this vest-like top…

…Which calls back pretty strongly to a certain point in Claire’s life.

There is a brief flash in the Season Two promo of a blue and purple riding habit with a jaunty tricorn as Claire gets out of a carriage, and even though the color combination seems new, it is actually a callback to the moment Claire is introduced in the very first episode.

I remember watching this scene and thinking that although the color combination was very flattering to her, purple and blue are the colors of a bruise. The Claire who we meet in Season One is coming from the end of recent violence, in a fragile marriage, looking to rebuild a life interrupted. It remains to be seen whether this is also true of these colors in Season Two.

Of particular note is this ensemble here, with the bright red embroidery.

This is not a quiet look. Despite the fact that a dress that color could be half-mourning, every element in this scene is calculated so that your eyes go directly to Claire and stay there. Amidst the muted tones of the street and the extras’ utilitarian clothing, her indigos, plums and reds make her a vivid exclamation point.

The embroidered flowers look like poppies, longtime symbols of death and the source of opium, which a healer of the time would have used to dull pain. There is no description of such a dress in the books but everything about the composition of this outfit and the way it frames her face hints at a dramatic crescendo. If not for a conspicuously missing accessory, I would almost be certain which.

Finally, the introduction of a new color into her palette. The eye-catching gold gown calls to mind a yellow silk Claire wears during a pivotal scene at the Duke’s house in the second novel, Dragonfly in Amber.

The lovely botanical illustrations on the stomacher and petticoat allude to her identity as a healer, while the boldness of both the color and print mark her firmly as an outsider not only in place, but time.

Especially the last outfit, with its wide straw brim and oversize flowers which evoke the post-war designs of Christian Dior.

Overall, despite the lavishness of Claire’s Parisian wardrobe in comparison with her

monochromatic wartime suits and muted Highland gowns, the story they tell is cohesive with a quality of the essential. Even formally dressed in one of the most lavish time periods that ever existed, this is a woman who does not pander to her beauty with an excess of adornment.

There is a Hepburn-esque quality to Caitriona Balfe’s portrayal of Claire that allows her to carry off extravagant costumes while broadcasting her inner pragmatism.

I’m not a costuming expert, and I don’t have a head for the details, but what I do note about Claire’s wardrobe is that it tells the story of a healer who exists in the time, vibrantly present, without being of it. Claire is a conundrum, and her clothing parallels her journey.

We couldn't agree more, at OutlanderHomepage. Wonder what Terry Dresbach's thoughts were going into the designing aspect of the garments. Terry did an interview with the Golden Globes to answer much of these questions.

Golden Globes http://www.goldenglobes.com/articles/dressing-romance-outlander-%E2%80%93-genius-terry-dresbach
Posted by Outlander Homepage at 6:30 AM