Outlander is out to save the future in Season 2. The stars and creators of the Starz series headed to the 2016 winter Television Critics Association press tour to preview what's ahead when Claire (Caitriona Balfe) and Jamie (Sam Heughan) head to Paris to try to prevent the Jacobite Rebellion and its subsequent failure.

From the return of Tobias Menzies as Frank to how showrunner Ron Moore and author Diana Gabaldon are working to prevent adverse butterfly effects as much as possible, here are eight key new details learned during the TCA presentation. Some minor spoilers for Season 2 ahead.


1. Diana Gabaldon Has Her Own Theory of Time Travel, Officially

There's a science behind the time travel in Outlander, even if it's a science that Gabaldon invented. "You always do that if you're dealing with time travel in any serious literary way, anyone who does time travel stuff, unless it's a costume drama where she goes back and she's going to be fancy clothes, but she's going to be a 20th century woman and show people the errors of their ways. This is not what I do," she said. "You do in fact figure out how time works one way or another. I am honored to say I was invited to write up the Gabaldon Theory of Time Travel for the Journal of Transfigural Mathematics in Berlin -- which I did."

Menzies, who played the dual roles of Claire's first husband Frank and sadistic British officer Black Jack Randall in Season 1, will return as Frank in Season 2. Moore said of bringing him back, "Frank's a great character, and he was such a fundamental part of the genesis of the story. Claire's drive to return to him was such a strong thread all throughout the first series. It didn't take a lot to realize that in the second season that that would be a component of it as well. It's just a rich and interesting character. Tobias is a great actor. It was a very organic process to be in the writers room working on story and it just folded itself into different elements as we broke the season."

Claire and Frank will cross paths again, which will be an interesting reunion considering Claire's adventures in Scotland during their time apart. "I think as much as when Claire first encounters Black Jack and can't fail but to see Frank in him and believe that somewhere there is that connection ... there is also that reverse thing where every time she looks at Frank she can't help but see Black Jack," Balfe said. "She's definitely not the same woman that left."


3. The Butterfly Effect Is Being Avoided as Much as Possible


Moore and Gabaldon have had a close working relationship since even before Outlander was sold to a network, and that has carried through the multiple seasons of the show. "She was always very generous with the material and spirit of 'I know there's going to be changes in adaptations and I trust that you guys will do the right thing by us.' I think that was a very mutually beneficial relationship. Ever since, it's always very positive," Moore explained to critics. "We can use her as a sounding board and say if we make this change, what's the butterfly effect down the line with all the other books. It's a massive mythology that she's created. Whenever we make fundamental changes to something that seems minor, you always want to make sure that it's not going to have repercussions that come back and bite us later in Season 5 or 6 or something like that."

"It's been great from my point of view. They've included me to an amazing extent," Gabaldon added. "I was very flattered and very pleased that they did want to talk to me about things. It's been a really interesting process I actually wrote one of the scripts for Season 2, which was definitely an experience. It's way different than writing a novel, for sure."


Season 1 ended with the reveal that Claire is pregnant, and Moore said "it definitely plays into the storyline, and that particular issue does come up at a certain point. ... Claire's pregnancy is a thread that's there from the first episode as soon as they arrive in Paris, and we continue it throughout the story, how it affects their relationship and her perception in her own role in the plot to disrupt the Jacobite Rebellion and so on."

5. Fergus Brings Out a New Side to Claire and Jamie

Heughan teases there are "new enemies, new allies" in Outlander: Season 2, and chief among them is a young French pickpocket named Fergus, played by Romann Berrux, who becomes a character close to Claire and Jamie. "He brings this great dimension to Claire and Jamie," Heughan said. "He becomes their surrogate son, and it's really nice to see Claire and Jamie play father and mother, and play this family. It brings another energy and dynamic to their relationship."

6. Jamie Is a Master Deceiver

Heughan said he's been "very surprised by Season 2," especially in what he's learned about Jamie.

"Season 1 was about discovery, about a young man growing up and finding his place in the world and in a relationship. Season 2 has been about discovering a side of the character that I didn't know was there. He's playing someone else, he's being quite deceptive and learning to be deceitful, and he does it very well," he said. "Jamie's very capable and good at most things. There's a side to him that I didn't know. He's still obviously traumatized or struggling with what happened to him. There's not a darkness, but there's a side of him I didn't know existed. His humor and his buoyancy and his natural ability to keep going no matter what's wrong, and also his absolute dedication to claire is admirable and inspiring."

Similarly, Balfe is getting a chance to learn new things about her character, and she's looking forward to storylines that she knows are coming down the pipeline. "The difference with this season is there's time to be in one place and contemplate. I feel like things are sitting with her a lot more, and she has time to consider her place and how she feels, and it's been a really amazing discovery in that way," Balfe said. "I feel that in I've gotten to know her much more. We have such, hopefully, a long journey to go hopefully with these characters. I'm really looking forward to playing the next phases. People who know the books know that Brianna comes in and how that is to be a mother and all of these things.

She continued, "I really admire her resilience and her intelligence. I would love to just ask her what her thoughts are being in all these places and times and how she sees humanity, having that conversation with her and about her drive for her career. It would be a very interesting dinner -- a very drunk dinner."

Expect a slight change of tone in Outlander: Season 2. "The danger and Paris is Versailles is less physical with the swords and weaponry. It's more politics and backstabbing and poison. It's more hidden," Heughan said. "There's a lot of politics at work and a lot more danger. It's a different kind of world. But we certainly do go back to Scotland where we go back to the mud and blood and gore, so there's something for everyone." 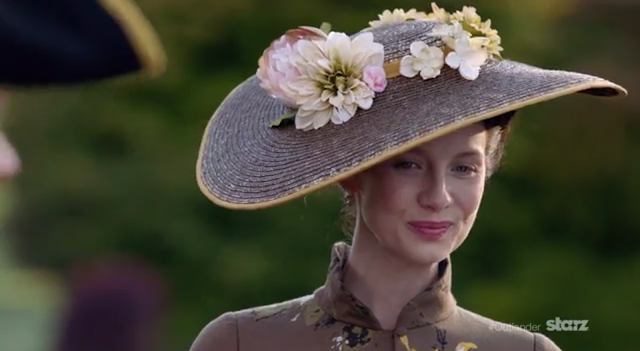 Posted by Outlander Homepage at 7:51 AM