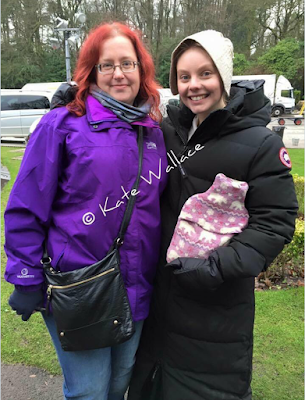 We saw the picture of Laoghaire (Beautiful Nell Hudson) taken with a fan. There was a gasp heard in the Outlander Fandom. Questions were everywhere on Social media. What has Ron done with Season two, Dragonfly in Amber? Why is Leery in season two?

Outlander
Book:
For everyone who read the first Outlanderbook, we know Leery has a fixation with Jamie and feels betrayed by his Marriage to Claire. We know about the ill wish placed under Claire's bed.
As we last saw Leery, she writes the note for Claire to go to Geillis, at her home in the Village, pretending Geillis is sick. Leery knowing full well that she was about to be arrested and tried as a witch by the locals.

We don't see her again, but hear about her from the point of view of Claire, feeling resentment and fury. Jamie (weirdly enough) isn't told about any of this. He only knows, he told Claire to stay away from Geillis but had to come back from a boar hunt with the Duke of Sandringham to save her because she didn't.

Show:
We see the same scenario with Leery, but she is more directly involved in the aftermath of the arrest and is seen at Geillis' house to ensure that Claire had indeed been arrested. To drive the point home, (Thanks Ron) she testifies at the Witch trial. Argues with Ned Gowan about her love for Jamie and when Claire is found guilty, Leery says the infamous line: I will dance upon your ashes....

There isn't a big difference from Book to show. In cinema, we need visuals to show the story. Great job so far...


Dragonfly in Amber
Book:
Leery is absent from this book, though her deed is analysed though out the story by Claire, while she is trying to come to terms with the events that lead the Fraser's to leave Castle Leoch, go to Lallybroch, and eventually to Jamie's arrest and rape at the hands of Black Jack Randall, and their escape to France.

With the one exception, after the Fraser's come back to Scotland, when Colum MacKenzie comes to see them during the Jacobite rising, right before the battle of Culloden, to figure out his clans participation with Charles Edward Stuart in regaining his throne. This is where Colum learns about Leery's deception, and offers to punish her for Claire, while asking her for an elixir to end his own life. Being that Claire worked through what had taken place, (in Leery's eyes about Jamie having married her) she considers this offer but declines. 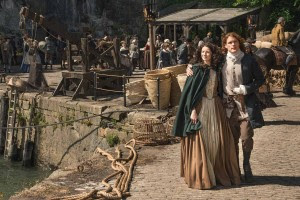 Show:
Ron D Moore, may have written a version of this, but we don't know until the series airs what his ultimate story will contain. What we do know is that the Fraser's are in France, but come back to Scotland, which ends with Scottish rising of 1745. This is like the book story, as far as we know it. 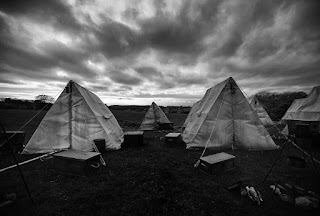 This is what Diana Gabaldon wrote to a fan about this: 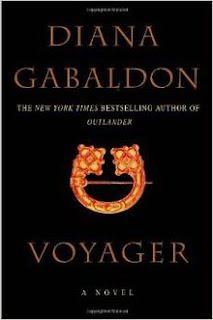 This is where there is a major disconnect in the Jamie and Claire story. The adventures, good and bad of both these characters that we love together through two books, is now in part their own stories alone, even though they never leave each others hearts and minds.

We read about Claire trying to get back to Jamie, after Roger Wakefield, learning he did not die on the battlefield of Culloden, finds him.
We get to know Brianna, Roger falls in love with her pretty hard.
We are told what becoming a Doctor cost Claire, about her relationship with Frank, and what took place between them after she returns to her own time. We learn about Frank's love for his daughter, and the changing dynamics of Claire and Franks marriage, and his passing.
Jamie has his own more tragic story. Years of hiding in a cave after returning to Lallybroch a wanted man, self-sacrifice to save his family and tenants, years in prison, and meeting Lord John Grey. Being indentured at Helwater and the life he tried to make there to be with his son, William. Coming home to Lallybroch, realizing he has nothing holding him there, he moves to 'Edinburgh', where Claire finds him thanks to his A. Malcom Printer persona, among other aliases used for his new line of work, smuggling. 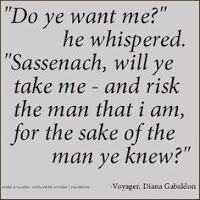 Getting through all of that, for a little bit of Jamie and Claire bliss, I'm sure you will agree was worth it and a great read, even though heart breaking.

But as the story unfolds, we are betrayed along with Claire (because we know what Leery had done) when we find out about Jamie's marriage to Leery, at Jenny's provoking. We then find forgiveness right along with Claire, to get the chance to love Jamie again through Claire, and hate Leery even more for shooting Jamie.
But no matter how they stay together its okay, we want them together!

Their time is but momentary. They find themselves sailing across the ocean to find young Ian, kidnapped by none other than Geillis Duncan, in her bid for a chest of jewels to go back through the stones.
In their current circumstances this far into the book, Jamie loses Claire again, to an English Ship Captain, whose crew is killed off by an epidemic, so Claire trying to save lives, is pressed into service. Obviously they find each other again, they rescue young Ian, and all is well after they manage (in a hurricane and a sea chase) to wash ashore in the Colonies. But for most of Voyager, Claire and Jamie are recounting times when they are apart, or are physically apart due to the situations they become entangled in. Not to mention that Claire almost drowns.


Show:
I'm not sure after Ron D Moore spent two seasons setting up Jaime and Claire's story, that season three as a stand alone book could be adapted well, in a sense that the shows two main characters are not in each others stories for a greater part of season three. It's hard to write an adaptation about two people thinking about each other. Do we really want to watch every episode with Jamie and Claire seperated except for a few? It's even harder to adapt what is needed visually to continue the Jamie and Claire story flow and include key information of their lives apart so the story unfolds naturally and is understood by none readers.

Thoughts:
Laoghaire and why she's in season two.
If Dragonfly in Amber and Voyager were one long story for Ron to adapt, in part changing some of the flash back sequences into real time, to keep Jamie in Claire's storyline through out, perhaps season two and season three will have all of the nuances of Diana's story, told by Ron in a way made for television, and be one story told in two seasons.
Would it bother fans, or ruin the story?
For me the second half of Outlander is where Frasers Ridge starts, book 4 and that would be a clean slate of where to begin their story.

What are your thoughts?


Posted by Outlander Homepage at 10:04 AM