New ‘Outlander’ trailer highlights a change from the book 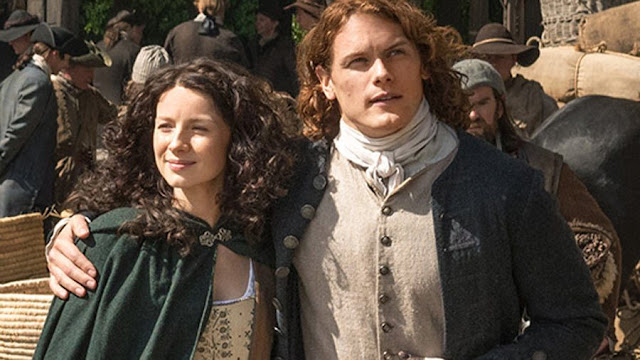 Starz premiered a new trailer for “Outlander” Season 2 at the 2016 TCA winter press tour Friday (Jan. 8), which offers viewers more details on the upcoming season, including a change from the books.

As the trailer opens, Claire (Caitriona Balfe) is shown waking up near the stones and then wandering down a road, where she asks a man in a car, “What year is it?” and he tells her, “It’s 1948.”

Claire is also shown in a hospital bed with Frank (Tobias Menzies) by her side. “I am so grateful … all that matters to me is that you’re here now. Whatever happened, wherever you’ve been,” says Frank.

Those scenes are juxtaposed with footage of Claire and Jamie (Sam Heughan) in 1740s Paris, attending galas at the king’s palace and conspiring to try to stop Prince Charles Stuart’s uprising.

“Change the future, is such a thing even possible?” asks Jamie, telling Claire that “whatever happens,” he’ll make sure she’s safe.

It ends in Claire impressing upon Jamie that they have to trust in each other and he says, “In this I do and in this I will.”

Unfortunately the trailer is not being released wide yet, but there is a new behind-the-scenes video

to tide fans over until the trailer is released.

Posted by Outlander Homepage at 10:12 AM