An Interview with actor Bryan Larkin.

Story
Bryan Larkin may play tough characters and heroes on the silver screen but when it comes right down to it, he understands where real heroes are needed. Children all over the world face life-threatening danger every day, with what may seem to them little hope of rescue . Knowing just how much a helping hand is needed, Bryan supports UNICEF UK - Children's Emergency Fund in their efforts to protect a precious resource: our most endangered and vulnerable children.


Please join Bryan, The Larkinator, raise funds in aid of UNICEF as they "protect children in danger, transform their lives, and build a safer world" .

To learn more about UNICEF UK, please go to their website: www.unicef.org.uk.

Appreciation gifts are available for all donation levels. For details please visit our website: www.larkinators.com/thelarkinatorgivingback

Donating through JustGiving is simple, fast and totally secure. Your details are safe with JustGiving – they’ll never sell them on or send unwanted emails. Once you donate, they’ll send your money directly to the charity. So it’s the most efficient way to donate – saving time and cutting costs for the charity. 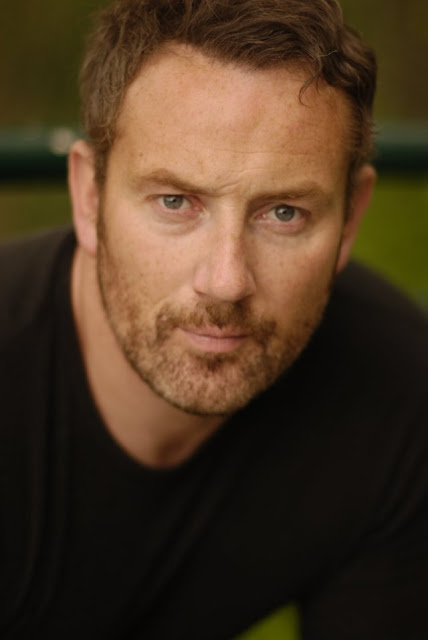 Sometimes it's the little things we remember most, and whether book, show, or both, OUTLANDER fans will never forget the iconic boar hunting scene between Dougal MacKenzie, played by Graham McTavish, and Dougal's lifelong, fatally wounded friend, Geordie, played by Bryan Larkin. OUTLANDER fans were riveted to their TV screens, watching with anticipation as one of our favorite moments between Claire and Dougal was so beautifully brought to life.

OutlanderHomepage recently enjoyed the opportunity to talk to Bryan Larkin, the 2 time BAFTA AWARD recipient, for Scene 2006 & Running In Traffic 2009 (which he wrote) and the Trailblazer Award at the Edinburgh Film Festival 2009, regarding his experiences on the OUTLANDER set, acting, producing and writing. His background, upcoming projects, including an exciting new film, and philanthropic endeavors. Let's see what this interesting Scot has to say... 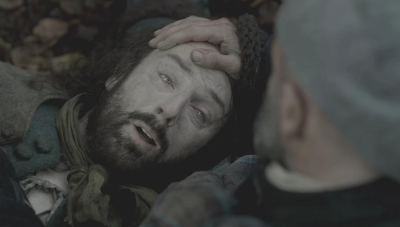 Outlander Home Page: What was it like working on the OUTLANDER set? Were you already familiar, or friends with other cast members, and what was it like to be transported back in time via the set designs, costumes, and script?

Bryan Larkin: My OUTLANDER experience began with a costume and make up test, and I remember walking into the studio and being greeted by Ron in his fine kilt. My first thought was "How great this production was for Scotland on the whole." The actors, the crew, the economy. Hollywood had come to town. When we had our read through of "The Gathering", it was like a who's who of screen in Scotland. I have known Gary Lewis for 14 years. We worked together on a movie when I had just left drama school. We always have a lot to talk about. I knew Sam but only a little. We first met at a party when we were both at drama school and it was great to connect with him again. Brian Kelly, the director and I, had known of each other and each others work, but hadn't met. Neville Kidd the DOP, acutally shot the movie I did with Gary Lewis and it was great to be reconnected on the set of OUTLANDER. Graham McTavish greeted me with a warm welcome and having known "of" him for years, it was really a great moment to finally meet and work with him. As an actor you can tell within a few moments just how good or bad a production is going to be by the people in the room and OUTLANDER had that feeling that just made you know you were going to be part of something really great. Everybody in the room was happy to be there, and grateful to be given the opportunity. It was special. The tone is set by those at the top and Ron and the others were just great to be around. You wanted to do your best. Not every project is like that. 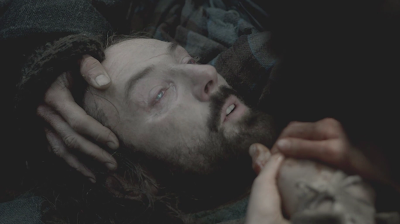 OHP: In OUTLANDER episode 4 "The Gathering", your character had a significant part. How did you prepare for the role of ill fated Geordie?
You as an actor, were completely immersed. That scene shows Dougal and Claire connecting on a level where Dougal realizes there's more to Claire, he tells her later, she has seen men die of violence, not a question but an observation. Is it a process for such depth, in a short scene?

Bryan Larkin: The Geordie death scene was very important for Dougal and Claire's relationship. It was vital for me to give them as much as I could to play off. In preparation for that scene I tried it a bunch of ways, but the truth of that scene as about two men saying goodbye, and sharing a very personal moment together, witnessed by a woman who embodies kindness and virtue.
The writing does it all for you. Geordie lived a simple but honorable life. A life Dougal can relate to. The scene works because of it's simplicity on a human level and bonds between two people who were at war with each other. The scene needed to be long to get all that across. I think in death people are at their most vulnerable and their humility pours out of them. I just played it as if I was saying goodbye to someone I loved. Looking up at Graham in that scene, his eyes were etched with longing. He made it easy. 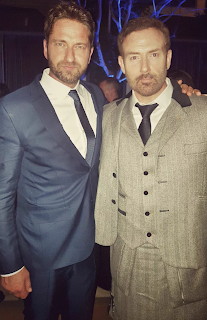 OHP: Congratulations on your new film, "London Has Fallen". What was it like on the set of your first Hollywood blockbuster? How does that differ from a production in the UK? Is getting into character for a large American film, similar to the independents in the UK, only with more input from the studio?

Bryan Larkin: I've been acting professionally for 14 years now and I've been fortunate to remain in work. I don't take just anything I am offered, and sometimes turned down a pay cheque when it hasn't felt right. "London" was one of those jobs that you don't even think twice about. I would have done it for free. It was not only because of who was involved, but it was also a challenge for me. It felt good to be considered worthy to share the screen with big names. It's validation for all the years of struggling as an actor. The main challenge in working on "London" was the time we had to get it the best we could. Time to prepare. Gerard, who I had most of my scenes with, was also producing and he was very good at getting the best of me. He told me that he wanted me to be great in the movie. He has a way of empowering everybody around him. That for me was a turning point. To have that support and encouragement. I felt like I was part of something special.


OHP: You're involved in a children's charity project? Can you tell us more about it?

Bryan Larkin: It hasn't been launched yet, so I'll get back to you on that. The project has to do with the prevention of violence against children.

(OHP is definitely going to follow up on Bryan's charity, so keep checking our website for information and links regarding this project.)


OHP: You're appearing in BBC Scotland's broadcast television series "Shetland", playing Eddie in season 3, starring another OUTLANDER alum, Douglas Henshall (Taran MacQuarry). Can you tell us about your part in this very intriguing crime drama?

Bryan Larkin: I play a hired assassin who arrives on the Island of Shetland. He's a family man just doing his day job. You'll have to wait and see what he gets up to, and what's in store for him.


OHP: Any other projects coming up in the near future? We have a link for the Podcast, Triumph and Disaster with Cameron McHarg via SoundCloud that you recently did. Triumph-and-Disaster

Bryan Larkin: I am very busy just now. There's a few doors opening for some movies, but it's too soon to say anything. There will be some announcements forthcoming. I'm planning on directing a movie this year, so stay tuned for more about that.


OHP: Did working on OUTLANDER pique your curiosity about your own Scot's blood, and family history, as it has done for so many of the show/books fans?

Bryan Larkin: My family is half Scots, half Irish. Larkin is an Irish surname, so we don't have a tartan, but my family crest is quite unique. My mother is a MacNaughton, so on her side we have a long history. OUTLANDER did make me think of where her family would have been during those times. I am a very proud Scot.


OHP: Since I have a blog about Whisky and also of Scot's descent, we couldn't possibly let you go with out asking.. Which Whisky do you prefer? And Kilts or slacks on the Red Carpet? (we see you wore a Kilt for the Premiere of “London has Fallen”) Great legs by the way..


Bryan Larkin: I'm not a big drinker but I am partial to a single malt. Macallan every New Year!

Side note for the Whisky:
Macallan 18 is a classic dram, you can't go wrong there. The Macallan Fine Oak expressions are my favorites among the Highland single malts. I'm a true peathead, Laphroaig 15 yr & Ardbeg's Uigeadail are my top favorites.

Thank you Bryan, we had fun putting this together....

Episodes of Shetland can be purchased at bbc.co.uk.
http://www.bbc.co.uk/programmes/p01s711r/episodes/guide

The Daily record said of Bryan Larkin at the Premiere of "London has Fallen": The East Kilbride actor got a taste of Hollywood last week while on the red carpet.

The kilt clad Bryan Larkin told the news, "The night was full of glitz and glam", as he posed for pictures with Gerard Bulter and then with friends, and was photo bombed by Butler. 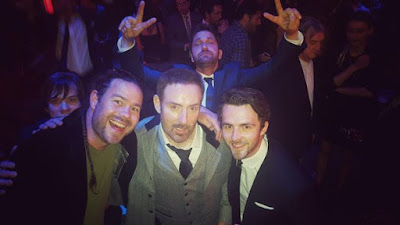 He also joked with Morgan Freeman about the Scots national Dress, saying Morgan asked: "You know your wearing a Hula skirt? Is there anything you want to declare?" To which Bryan replied: "Wait for the sequel, Kilts have Fallen and you'll find out!"

Bryan was very happy he got to meet some of his idols in the industry.


For any details and information on Bryan's writing, producing and movies, click link to his wedsite:  http://bryanlarkin1.wix.com/official


To join The Bryan Larkin Fan Club, visit http://www.larkinators.com/  and on Twitter: https://twitter.com/theLarkinators?s=09

Thank you to the Bryan Larkin fan team at @Bouton_Barks @ChattanGypsy @Purpleiris13 for letting us participate.....

Posted by Outlander Homepage at 7:26 AM