Caitriona Balfe gets a Nomination by IFTA 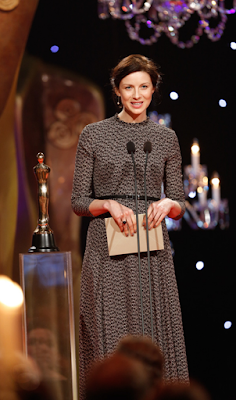 Caitriona Balfe has been honored with a Nomination by The Irish Film and Television Academy in the category of: Actress in a Lead Role Drama, for her portrayal of Claire Randall in Starz Original Series Outlander.

Best of Luck, Caitriona! We will be watching.

Last year, Caitriona attended as a Presenter and was also Nominated in the categories of: Rising Star and Actress in a Lead Role Drama 2015.

Vikings, which is filmed in Ireland and uses all their resources, including actors, production, and a ton of television crew, has been Nominated in 5 categories. Including: Best Drama


What The Irish Film and Television Academy means to the Arts in Ireland:

The Irish Film and Television Academy (IFTA) is an all-Ireland organisation whose mission is to encourage excellence in Irish Film and Television by providing a platform for inspiration, creative development and collaboration across the entire industry. The aim of the IFTA Academy is the stimulation of original and creative production work, and the encouragement of excellence through recognition, education and leadership in film and television.

IFTA has a Membership of approximately 1000 individuals across 14 Chapters of Discipline. The Academy programmes over 30 learning and networking events annually for Members, including masterclasses, panel discussions, lectures, Q&A, ‘In Conversation With...’, screenings, workshops, lunchtime labs, and more.

In 2012 The Academy established the John Ford Ireland Symposium, to honour and celebrate the legacy of Irish-American filmmaker John Ford. Curating three days of events across the Symposium in June the Academy welcomes a host of Irish & International filmmakers and craftspeople to Dublin, to engage with and inspire emerging filmmakers and the general public.

International branches IFTA London and IFTA LA help to build strong relationships and links between the creative industries in Ireland and UK & US. Our international branches give Members unique networking opportunities: to showcase Irish talent international; to keep abreast of developments in the Irish industry and engage with and meet internationally based film/tv professionals and Irish creative talent who frequently travel to work in UK and LA. IFTA is also a co-founder of the Film Academies Network of Europe (FAN-E).

The Awards show will take place in Dublin, Ireland on April 9th 2016.

The Irish Film & Television Academy is delighted to announce that acclaimed Irish Actor Liam Neeson will be honoured with the Irish Academy (IFTA) Award for his ‘Outstanding Contribution to Cinema’ at the 2016 annual IFTA Film & Drama Awards, taking place at the Round Room, Mansion House, Dublin on Saturday 9th April.

The President of Ireland, Michael D Higgins will officially present the Award at the Ceremony on behalf of the Academy, the entire Irish film industry and his community of peers and friends, both North and South.

Born in Ballymena, County Antrim, Ireland, to Katherine and Bernard Neeson, Liam Neeson has established himself as a world renowned and outstanding actor of his generation. His body of work has already spanned 30 years across a diverse range of projects; eighty four (84) films in total. The Oscar nominated actor who has just completed work on Martin Scorsese’s new movie ‘Silence’, has garnered international recognition for his work in both major studio blockbusters and acclaimed independent features, delivering superb performances that have captivated audiences throughout the world.

Neeson has worked with some of the greatest filmmakers in the world; Martin Scorsese, Steven Spielberg, George Lucas, John Boorman, Neil Jordan, Kathryn Bigelow, Christopher Nolan and Oliver Hirschbiegel among many others, and has collaborated multiple times with some of these directors.

He has received international Award recognition for various roles through his ability to depict real-life characters such as Michael Collins, Alfred Kinsey and Oskar Schindler – with the latter role universally acknowledged as an ‘exceptional’ performance. He has also been entrusted to deliver iconic roles and fictional characters in numerous major blockbuster franchises such as Star Wars and Batman and the enormously successful blockbuster trilogy Taken. His distinctive voice has also given life to animated characters including the Lion ‘Aslan’ in the Chronicles of Narnia, and he has narrated many international documentaries including the recent Irish series ‘1916’, a project close to Neeson’s heart.

In his home country of Ireland, Neeson is acknowledged as one of its most successful actors, beloved by Irish audiences and industry alike. His international achievement and status has made him an inspiring figure for young Irish actors and filmmakers. Alongside his work in major blockbuster movies, Neeson has always stayed connected with home productions, making at least seven Irish movies over the years and lending his distinctive voice to narrating important Documentaries. He has collaborated with Irish Director Neil Jordan across three films including the epic and much loved ‘Michael Collins’ for which he won numerous awards along with a Golden Globe nomination. The film celebrates its 20th anniversary this year.

Áine Moriarty, Chief Executive of IFTA said: “I’m delighted that Liam Neeson is to receive this Award from the Irish Academy on April 9th. Liam is a luminary of film whose outstanding talent, craft and skill as an actor, along with his enormous achievements in the world of cinema, has made him an inspiration to young Irish filmmakers and actors coming through the ranks in our home industry today. We look forward to welcoming Liam back home to acknowledge and celebrate his achievements.”

Liam Neeson, responding to the news said: "I am honored and humbled to be recognized by the Irish Academy with this award, especially when I am following in the footsteps of an illustrious group of Irish filmmakers before me such as Boorman, Jordan, O'Hara and Sheridan. I look forward to coming to Dublin to celebrate with our home industry and with my colleagues and friends."

For the list of other nominations go to IFTA http://ifta.ie/awards/nominees_2016/index.html
Posted by Outlander Homepage at 12:28 PM