From Scotland to Paris: A Behind the Scenes Journey with Outlander


The STARZ Original Series Outlander, based on Diana Gabaldon's international best-selling novels, spans romance, science fiction, history and adventure, and has captured the hearts and imaginations of television viewers around the world.

This season, Outlander moves from the Scottish Highlands to the French Court of Louis XV. You're invited to a behind-the-scenes event as cast and crew discuss the thrill of creating the magnificent world of 18th century Paris and Versailles, including the meticulous work of the costume and set departments.

In addition, Emmy Award-winning composer Bear McCreary will perform his new theme for this second-season adventure.

Complimentary attendance for Television Academy members and one guest only (non-transferable). Membership card and ID are necessary for admittance.

Seating is on a first-come, first-served basis with reservation; Admission is not guaranteed.

This event will be webcast LIVE here on TelevisionAcademy.com at 7:30PM EDT/4:30PM PDT. Bookmark this page and return to watch the event! 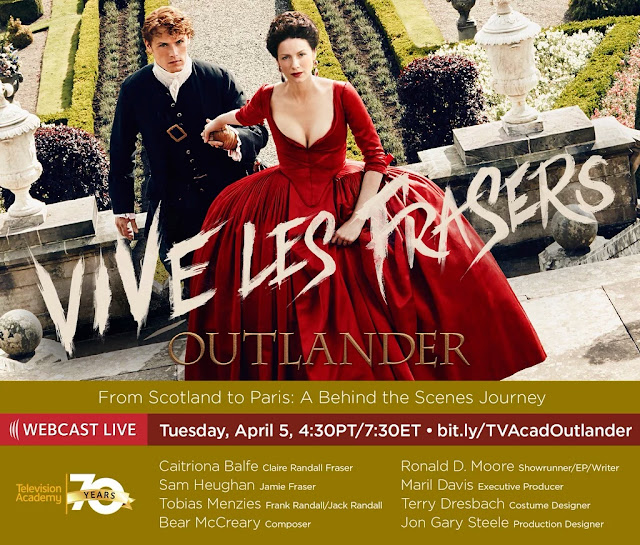 Posted by Outlander Homepage at 1:06 PM