G'DAY SAM! An interview with Sonya Kreiskott from Aussie Outlanders!

Jamie Fraser heads ‘Down Under’ 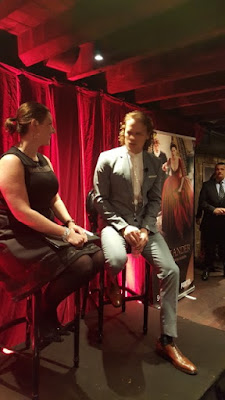 There was much excitement in the Southern Hemisphere recently, when it was announced that “Himself” would be making a brief visit to Australian shores, as part of a publicity tour ahead of season 2. The lucky chosen city was Sydney, but almost immediately there was mystery surrounding the trip. There was only one fan event announced, to be held at a secret location. The only way of attending was to win your way in. The hosts of the event, Foxtel TV (Outlander screens here on its Soho channel) offered 20 double passes and asked entrants to consider, in 25 words or less, what they would ask Sam, if given the chance. A second competition, run by a group called The Viewing Lounge, offered 2 double passes and asked entrants to explain why they loved Outlander. Meanwhile, the fan group, Aussie Outlanders, held a lucky dip draw for 6 single tickets. So, imagine the scene. 50 passes available, thousands of Outlander fans… In scenes reminiscent of Willy Wonka and his golden tickets, the frenzy began.

Around the same time, one fan happened to see her local butcher preparing some haggis and shortbread for a tv program the following Monday and it was soon confirmed that there was indeed a televised interview happening at Studio 10 in Sydney, for which audience tickets were available. Not for long. It sold out in record time, with the show reporting its biggest studio audience ever. 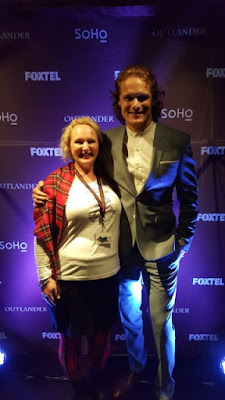 “Sam Day” was Monday 21st March. Now you would think, as your faithful Aussie blogger, I would have been lucky enough to score an entry to at least one of these events. But sadly, it wasn’t to be. (I thought my entries were good, too!) Luckily though, Sonya Kreiskott, one of the admins of Aussie Outlanders, was pleased to tell us a little about events as they unfolded.

OHP: Sonya, to start with, tell us something about yourself. How did you come to love the Outlander series? Was it through the books or the tv series?

Sonya: I am a married almost 50 year old Mum of a 16 year old son. I discovered the books about 17 years ago. My Mum had been given some books from a friend and passed them on to me, as she didn't think it would be something she herself would read. I then discovered I only had books 2 - 4 in the series, so of course I had to find the first book before I could begin my journey. As I was reading Cross Stitch for the first time (Outlander was published as Cross Stitch in Australia and the UK), I found myself laughing, crying and biting my nails as I turned each page. I was totally sucked in within a few chapters. I could hear the Scottish accents and picture the scenery. Diana Gabaldon has a way with words like no other author I have read.

OHP: Now tell us a little about Aussie Outlanders. How long has the group been running? Who is in charge? How many members does it have? How can people join or follow the group?

Sonya: Aussie Outlanders began in October 2013, and was started by Angelena H. I think I joined in the 2nd month and became an admin in February 2014, after a gathering in Brisbane. Our other admin is Leah N. We currently have almost 2700 members. Australian fans can join by searching for our Facebook group 'Aussie Outlanders' and clicking on the join request. We normally action the request on the same day. Fans can follow us on Twitter @Aussieoutlanders and we also have Instagram @ Aussie outlanders (although that is not as active).

OHP: Sam Heughan visited Australia recently and tickets to the Foxtel fan event were very hard to come by. How many tickets did Aussie Outlanders receive and how did this come about?

Sonya:  Since before season 1 aired, our group has been building a relationship with Foxtel/SoHo. In 2014, we were lucky to be given 20 double passes to a special preview of Season 1 Episode 1 held in Brisbane, Sydney and Melbourne simultaneously. Since then, Aussie Outlanders has been in regular contact with Foxtel. We support them, they support us and our members support them too. It's fantastic. As a result, we were given 8 tickets to the Sydney event. 2 tickets were allocated to admin and 6 tickets were left for our members.

0HP: For the lucky fans, Monday 21st March sounds like a day to remember! Tell us something about that day. Which events were you involved in?

Sonya: I watched the Studio 10 show on TV, screaming with joy when I recognised a fellow member on the screen. I was so excited for everyone there.  (NB. To watch the interview, go here:
https://www.youtube.com/watch?v=H0hBu2HpPN4)
Later that night, I was lucky enough to to attend the evening event held by Foxtel in Sydney.

OHP: Where was the evening event held? Can you tell us what happened?

Sonya: Initially Foxtel advised the event would be held at The Argyle Club in The Rocks, but when we got there, we were directed to another club called The Cut.  Angelena and I were escorting another member, as she had recently been involved in a car accident and as a result of her injuries has a broken back.
Foxtel representatives were very accommodating of Angela's injury and allowed us early entry to the venue so we could get her seated prior to the rush, to avoid her getting bumped.  (NB. You can read about Angela’s accident here:
https://au.news.yahoo.com/thewest/video/watch/31105831/mum-home-from-hospital-after-breaking-back-in-accident/#page1 )

Before the other guests arrived, the three of us were interviewed. Once everyone was inside (approximately 70 people altogether), finger food was served,  along with wine and bubbles. Soon enough a Foxtel editor came out and the fun began. There was a huge TV near the small stage which started to play some highlights of Season 1. I am sure we were all hoping to see the first episode of season 2, but no such luck! Then Sam was brought out and introduced - to a huge roar from his happy fans welcoming him to Sydney. The editor conducted a 40 minute interview, at the end of which five people got to ask the question that won them a ticket to the event.

All too soon it was time for things to get wrapped up. We were then invited to line up to meet Sam for a quick one-on-one photo op in another room. Again, Angelena and I escorted Angela in first and waited a few minutes before Sam came in. He was very gracious, looked you in the eye when talking to you and looked interested in what you were saying.  We got a few lovely photos and managed to give him a small gift of appreciation for coming all this way for such a short time. We asked him to come again, stay longer, and to encourage other cast members to visit Australia.

OHP:  What was one interesting question that was asked and what was Sam’s answer?

Sonya: One member asked, " What would we find in your fridge if we looked in it today?” Sam's answer was, “Not much as I haven't been home for a while, but normally you would find some healthy food and some gin!”  (Not whisky as he doesn't keep that in the fridge.)

OHP: What will you remember most about your time with Sam?

Sonya: I will remember laughing together, how strong he is, how he looked at you when talking to you and just how nice he was.

OHP: What are you looking forward to about season 2?

Sonya: I am looking forward to seeing new characters introduced, especially Bree and Roger’s meeting and the beginning of their own love story.

OHP: Finally, in your opinion, what is the best thing about being an Outlander fan?

Sonya: Meeting all the Aussie Outlander members when I can. It’s wonderful being greeted as a warm friend even if you haven't met that person before.  I also love the support that we all give each other in understanding our love of the books and the show.

Thanks so much to Sonya for the interview. Even though he was only in Australia for a very short time, Sam did a number of interviews, links to which are below:
• Radio National:
https://radio.abc.net.au/programitem/pgX4V0n29G?play=true
• Sam plays a radio quiz:
http://www.2dayfm.com.au/shows/rove-and-sam/videos/sam-heughan-plays-outlander-or-outback/
• Rove and Sam:
http://omnyapp.com/shows/rove-and-sam-2dayfm/sam-heughan-chats-to-rove-and-sam
• Marie Claire interview:
https://au.lifestyle.yahoo.com/marie-claire/news-and-views/celebrity/a/31172190/five-minutes-with-sam-heughan/

This blog post was written by our Aussie admin, Susie Brown, a children’s author, teacher-librarian and Outlander fan who lives in Australia. Susie still dreams of meeting Sam Heughan one day!
Posted by Outlander Homepage at 8:22 AM