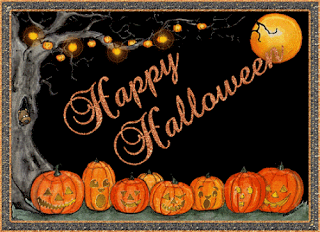 Here are some Halloween-themed quotes from Diana Gabaldon's books and stories. Hope you enjoy them!

1) Roger's thoughts, on the eve of Claire's departure through the stones to find Jamie:

Hallowe'en had always seemed to him a restless night, alive with waking spirits. Tonight was even more so, with the knowledge of what would happen in the morning. The jack o'lantern on the desk grinned in anticipation, filling the room with the homely scent of baking pies.

2) This is one of my favorites from AN ECHO IN THE BONE:

Now there was nothing out there but the black of a moonless Highland night. The sort of night when Christians stayed indoors and put holy water on the doorposts, because the things that walked the moors and the high places were not always holy.

3) Claire and Roger on Halloween night, 1968. If you're not familiar with the story Roger is referring to, look here.

"No, I never could sleep on All Hallows'. Not after all the stories my father told me; I always thought I could hear ghosts talking outside my window."

She smiled, coming into the firelight. "And what did they say?"

"'See'st thou this great gray head, with jaws which have no meat?' " Roger quoted. "You know the story? The little tailor who spent the night in a haunted church, and met the hungry ghost?"

"I do. I think if I'd heard that outside my window, I'd have spent the rest of the night hiding under the bedclothes."

4) I couldn't resist including a bit of Duncan's ghost story here:

"He said it was a figure like a man, but with no body," Duncan said quietly. "All white, like as it might have been made of the mist. But wi' great holes where its eyes should be, and empty black, fit to draw the soul from his body with dread."

5) Even wee Jemmy is affected by stories of "things that go bump in the night".

"Scared? Of what?" A little more gently, she pulled the shirt off over his head.

"What ghost?" she asked warily, not sure yet how to handle this. She was aware that all of the slaves at River Run believed implicitly in ghosts, simply as a fact of life. So did virtually all of the Scottish settlers in Cross Creek, Campbelton, and the Ridge. And the Germans from Salem and Bethania. So, for that matter, did her own father. She could not simply inform Jem that there was no such thing as a ghost--particularly as she was not entirely convinced of that herself.

"Maighistear arsaidh's ghost," he said, looking up at her for the first time, his dark blue eyes troubled. "Josh says he's been walkin'."

There was; a single light, bobbing evenly over the ground, as it would if someone carried it. But look as he might, Jerry could see no one behind it, and a violent shiver ran over him.

“Uisge,” said the other man under his breath. Jerry knew that word well enough--spirit, it meant. And usually an ill-disposed one. A haunt.

7) I don't care how many times I've read this, it still sends a chill up my spine, every time.

"You asked me, Captain, if I were a witch," I said, my voice low and steady. "I'll answer you now. Witch I am. Witch, and I curse you. You will marry, Captain, and your wife will bear a child, but you shall not live to see your firstborn. I curse you with knowledge, Jack Randall--I give you the hour of your death."

8) Lord John's encounter with a zombie:

Bloody hell, where was the man? If it was a man. For even as his mind reasserted its claim to reason, his more visceral faculties were recalling Rodrigo's parting statement: Zombie are dead people, sah. And whatever was here in the dark with him seemed to have been dead for several days, judging from its smell.

He could hear the rustling of something moving quietly toward him. Was it breathing? He couldn't tell, for the rasp of his own breath, harsh in his throat, and the blood-thick hammering of his heart in his ears.

9) And finally, on a lighter note, here's Mandy, age three:

Mandy bounced a little on her booster seat, leaning to peer out the window. She was wearing the Halloween mask Bree had helped her make, this being a mouse princess: a mouse face drawn with crayons on a paper plate, with holes pierced for eyes and at either side for pink yarn ties, pink pipe cleaners glued on for whiskers, and a precarious small crown made with cardboard, more glue, and most of a bottle of gold glitter.

Scots celebrated Samhain with hollowed-out turnips with candles in them, but Brianna had wanted a slightly more festive tradition for her half-American children. The whole seat sparkled as though the car had been sprinkled with pixie dust.

Happy Halloween / Samhain / All Hallows' Eve to all of you! If you happen to go near any stone circles in the next several days, be sure to carry a wee gemstone with you! You just never know what might happen.

Posted by Outlander Homepage at 7:07 PM