THR's annual rundown of TV's most valuable writer-producers, whose worth only keeps rising in this golden age of content — tarnish and all — as they reveal their idols and binge-watch favorites.

TV's much-discussed proliferation of scripted series — and the widely held belief that a saturation point is looming — has given revered showrunners even more leverage in the business. Why? Even in TV's ballyhooed "golden age," there isn't enough talent to go around.

The lack of skilled writer-producers, lamented from executive suites to the terrace at Soho House, has put the squeeze on writers rooms. When The Hollywood Reporter asked its 2015 Power Showrunners to describe a challenge that wasn't an issue five years ago, responses overwhelmingly focused on the dearth of available staffers. "Everyone good is working on a show for eight episodes," says Mindy Kaling, creator and star of The Mindy Project. "Then, when they're free, we're already staffed up."

Her sentiment is echoed by the old guard. Carlton Cuse, a seasoned pro of more than 20 years who has three dramas (Bates Motel, The Strain, Colony) on his plate currently, says the competition to hire the best writers has reached new heights. "There are 400 shows that all want to hire the same people," he says.

If there is a tipping point, we're not quite there. The volume of original scripted series is up 40 percent from where it was in 2010. It makes the already subjective job of calculating which showrunners wield the most influence even more complicated. That is why THR editors recast the methodology for this year's list of Power Showrunners, who were chosen based on their value to network (or streamer) identity, ratings clout, number of series on the air and critical favor. Does TV newbie Mr. Robot creator Sam Esmail have the same clout as uberproducerGreg Berlanti? Of course not — unless you work at USA. That's one reason why you'll see them both — and 19 other names who never have graced this list — in the 2015 class.

The Network Ambassadors — With every platform clamoring for its own scripted identity, these are the producers behind the series that have become their outlets' creative calling cards.

The Ratings Magnets — Theirs are the biggest shows on TV, attracting huge audiences and paying the bills at their networks and studios — making them quite popular in the process.

The Heavyweights — These producers boast massive overall deals, multiple series on numerous platforms and the clout to pitch — and sell — at a rate unrivaled by their peers.

The Pop Icons — Their cultural footprint extends far beyond Hollywood, with critical and awards cachet that allows them to court A-list talent and envy among their competitors.


We cropped the article and added a link. But of course included RON D MOORE 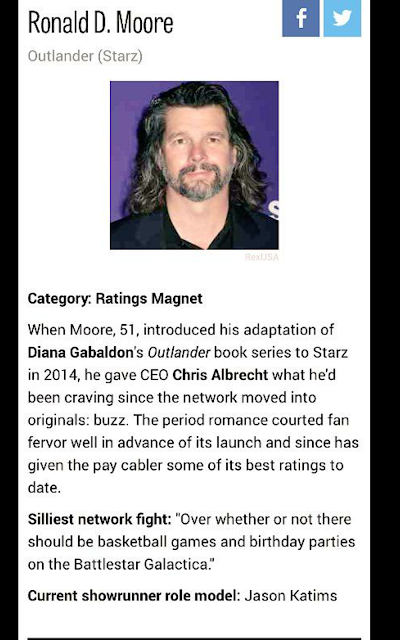 Posted by Outlander Homepage at 10:01 AM