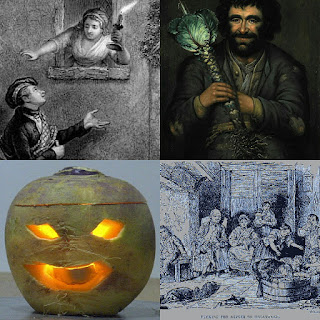 Samhain...Not As Scary As Droughtlander
By Nancy M Guillory of OutlanderHomepage


It's Halloween, and we've been suffering through the horror of "Droughtlander" for months, with several more months of this "Jamie-less" hell to go, but don't give up just yet. There is some hope to be had. Forget all the commercialism of the holiday, the costume and decoration contests, and participate as Jaime and his ancestor's might have by celebrating the fire feast Samhain (Sah-win).
Predominantly celebrated in Ireland, Scotland, and the Isle of Man, Samhain along with Imbolc, Beltane, and Lughnasadh, comprises the four seasons of Gaelic festivals. Samhain marks the end of the harvest and the onset of winter. The Celts saw winter as a time of darkness, when the Goddess turned from maiden into crone, or Cailleach, the Old Hag, who devoured anything left living in the fields, hence, crops were gathered, cattle were driven down from summer pastures, a select number were then slaughtered for provisions during the season of cold and death This dark half of the year is considered by some to be the Celtic New Year, as it was often a time for reflection, as well as preparation for the coming spring, a time of rebirth, and renewal. In the four centuries after 43 A.D. of Roman rule, two of their festivals were incorporated into the Celtic rituals of Samhain. Feralia, observed in late October, commemorated the passing of the deceased. Honoring Pomona, Roman goddess of fruit and trees came next, her symbol being that of the apple. The centuries later tradition of bobbing, or as the Scots would say "dookin fer apples" is believed to have been derived from this.
Even after the advent of Christianity, these seasons of the Celtic wheel of the year were, and still are observed, Samhain beginning at sunset on October 31st, ending at sunset on November 1st, when the Catholic observances of All Saints and All Souls days followed seuit. Believed to be a liminal time, when the veil between the worlds thinned, and the spirits, or fairies could come through. In order to pacify these spirits, or Aos Si, to insure people and livestock survived the winter, gifts of food and drink were left out for them. Lost dead ancestors, and loved ones were also believed to visit their families during Samhain, and many people baked them "soul cakes" and held feasts at which a place was set for those long-lost. Some superstitious souls known as "guisers", disguised themselves to evade evil spirits,often going door to door gathering food items for the feast, threatening those who refused to give anything, with mischief and pranks.. Also, hollowing out, then carving a hideous face into a turnip, or neep, and illuminating it with a lighted candle was another method of warding off demons, both customs that have been adapted to our modern-day Halloween. Divination was also widely practiced at Samhain throughout the ages, where as apple peels were tossed over one's shoulder, the shape it landed in revealing the initial of the first name of a future spouse. (Recall a the Hogmanay celebration at the big house on Fraser's Ridge in The Fiery Cross")
Now, I can just envision a braw, wee, red-heided laddie, with his face all begrimed, bright blue eyes a sparkle with intended mischief, terrorizing the tenants of Lallybroch, in search of sweeties to placate any ghosties lurking about. Can't you? So, perhaps celebrating Halloween/Samhain Scottish style, might help ease your Droughtlander woe, and misery, as well as provide a glimpse of where it all began.Naturally, depending on your living arrangements, and location, bonfires ,herding livestock, and especially animal sacrifices, may not be feasible, the latter being vehemently discouraged. Dinna fash,! You already have the basics down pat, as carving pumpkins/turnips, lighting candles, and handing out treats to "guisers and mummers" is likely, old hat. Just add a few baked goodies aka soul cakes, set a place at the table in honor of dearly departed great auntie Bertha, or Grampa Jasper, and watch out for visitors from beyond the veil....Unless a tall, handsome Jacobite ghost, decked out in Fraser plaid appears.... Samhain Blessings 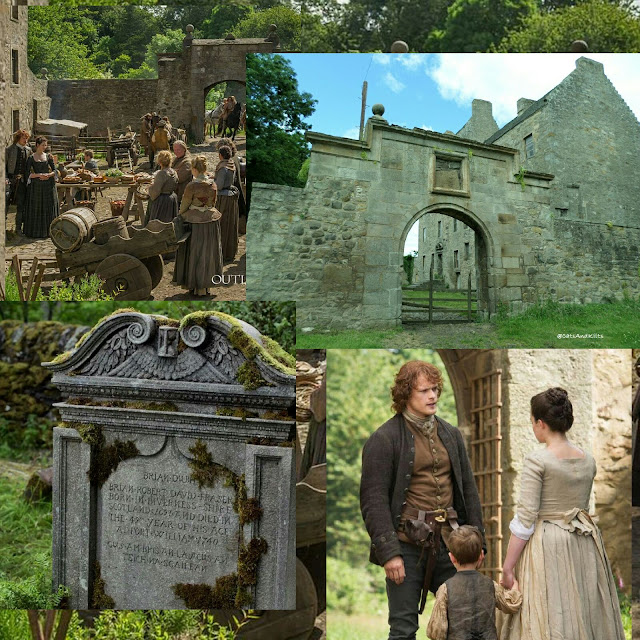 Posted by Outlander Homepage at 11:37 AM