Ever since the early days of season 1, Outlander viewers were treated to the comedy stylings of the MacKenzie clansmen, Rupert MacKenzie and Angus Mhor. But in season 2, Lallybroch provided its own duo, in the form of Ross and Kincaid. Crofters by trade, the two men came with Jamie and Murtagh to fight as part of the Fraser clan in the Jacobite rebellion. From a viewer’s perspective, portraying these fiercely proud Highlanders looked like a comprehensive job, so just what was it like to bring these men to life? Outlander Homepage was fortunate enough to be granted an interview with Ross himself, Scott Kyle, who very kindly gave us his perspective on being one of the Fraser clansmen, as well as sharing some details of his life away from the Outlander set.

OHP: Tell us something about yourself - how did you get into acting? What other shows/roles have you been involved with pre Outlander? 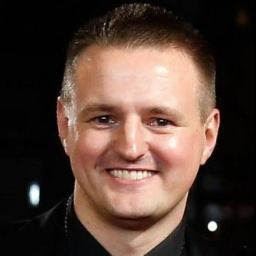 Scott: I attended The City of Glasgow College, where I studied Acting and Performance. During my studies, I was fortunate to receive a number of awards for my entrepreneurial skills. After graduating from college, I went on to establish NLP Theatre Company. Our first production, Des Dillon’s “Singin I’m No A Billy, He’s a Tim” was a commercial success, grossing over £2 million at the box office. What was even better was the fact that over 75% of the people who came to see the show had never been to the theatre before. This was my aim: to try hard to reach audiences and encourage them to visit the theatre. I appeared in the production as Billy, and received the "Best Actor Award" at The Stage Awards for Acting Excellence in 2010. In 2013, in association with NLP Theatre, I formed the Regal Rep Company, which presented a new piece of work “How To Make a Killing in Bollywood” at the Edinburgh Festival. The show was selected by BBC Scotland, Radio 2 and BBC Asian Network as one of the “Highlights of the Fringe”. Whilst I am committed to The Regal Community Theatre as Artistic Director and Venue Manager on a full time basis, I am fortunate to have the support of the trustees to work on occasional acting projects. I recently played the part of Corporal Stu Pearson in the feature film “Kajaki The True Story”. This film was produced by Oscar winning producer Gareth-Ellis Unwin (The King’s Speech) and Pukka Films. Kajaki is a British war film based on actual events during the Afghan War. It was released in cinemas on 28th November 2014, and received a BAFTA nomination for "Outstanding Debut by a British Writer, Director or Producer" at the 2015 BAFTAS.

OHP: Ross and Kincaid were Lallybroch’s answer to Rupert and Angus. How much time did you have to work together before filming your scenes? Tell us a bit about your character - did you give him a back story?

Scott: I met Gregor at the studios for our fight training bootcamp and we instantly hit it off. We had a few mutual friends in common, which helped break the ice. As soon as I knew I had been cast in the show, I started listening to the audio books and to try and get a picture of the world that Diana Gabaldon had created. I knew that Ross was one of the smaller parts in the series and I hoped that I would be given the opportunity to work with as many of the core cast as possible. I didn’t make up a back story for Ross, but I did try to source as much info as possible from the internet to try and create the character. The rest of the character was created on set, as I took in all of the surroundings and outer characters.

OHP: Can you tell us a little bit about preparing for the battle scenes? The overall impression for viewers was that we were watching a group of men gradually becoming well trained soldiers - did it feel like that? Did it take a long time to get all the movements etc right? Was there a feeling of camaraderie amongst the men, or was there just a lot of sitting around?!

Scott: The battle preparations started with a training session with the fight director and the stunt team. The work was then taken onto the battlefield and we had a few rehearsals before shooting. The more takes we did, the better the men got - so this probably came across on the screen. There were 100 supporting artists who played the highlander army and we still meet up regularly for a few pints! The guys were very keen and extremely committed to the show and their roles - top blokes.

OHP: The scenes leading up to the Battle of Prestonpans looked COLD! How long did these sequences take to film? Can you talk about what it was like to film the battle sequences in the tent?

Scott: The great thing about being cold and wet is that you don’t need to act cold and wet because you are freezing. Ha ha! The smoke filled tent was a lot of fun, but it was hard to breath at some points and we had to pop out for regular breaks. That said, we all had great fun and it was a nice way to end the episode, with a bloodbath!

OHP: Before the battle, Ross and Kincaid share a beautiful conversation where they each make a will of sorts, leaving their possessions and responsibilities to the other. Did filming scenes like that make you think about your own mortality?

Scott: Yes, absolutely. The scene was very emotional and you couldn’t help but think about how the real men amongst the Jacobite army must have felt. I also knew that I would be losing (for real) two good friends in Gregor Firth and Stephen Walters, who would not be returning from the battlefield with the rest of us. I tried to use all of this in the scenes and tap into it when they shouted action.

OHP: How difficult was it to film Ross’ grief following Kincaid’s death?  Do scenes like that stay with you for a while afterwards? 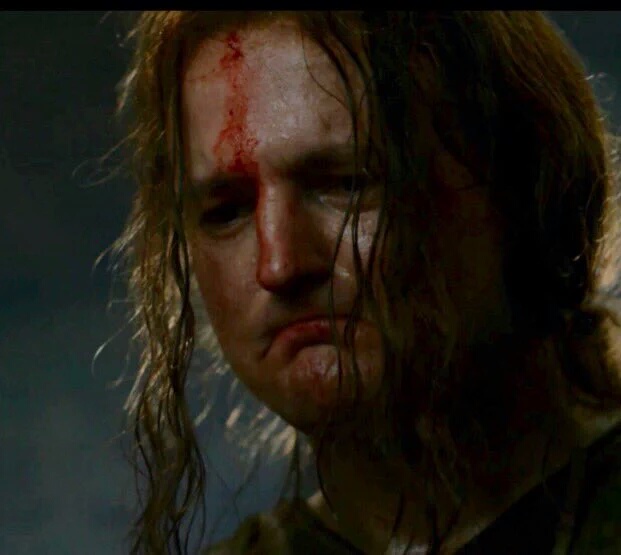 Scott: The death scene was very emotional and because we filmed the scenes chronologically, I had already played out the battlefield sequences, which helped when mourning Kincaid in the croft house. The scenes do stay with you but you are snapped out of it by characters like Stephen and Duncan, who starts laughing and joking after the tougher scenes.

OHP: Can you give us a little bit of insight as to a typical day filming on the Outlander set? What was involved? Who were your main scenes with? Are you able to share a funny memory?

Scott: The day always started out with an early pick up and drive to set, breakfast in my trailer and then costume & makeup. Every day was different and we had a few night shoots to contend with, but it was all great fun and an experience that I will never forget. Some of the best laughs were had between takes during the tougher scenes and I think the more experienced cast members would crack a joke just to break the tension.

OHP: We know that you’re an artistic director of the Bathgate Regal Theatre. Can you tell us a bit about the theatre and what your job involves?

Scott: I love performing on stage and in fact most of my career has been on the stage. However as I have gotten older, I seem to be drifting more and more towards film and tv. That said, the theatre is very much my passion and it gives me a chance to create opportunities for other performers, which is very important to me.

OHP: What happens next in your career? Is there anything you would like to promote in terms of future roles or projects? Any charities you would like your fans to get behind?

Scott: As with all actors I have no idea what the future holds for me, but obviously I would love to get another opportunity to work on Outlander. In the meantime I will continue to work at the theatre and try to inspire the next generation of storytellers.

(NB. Scott was too modest to mention this, but we’d like to encourage everyone to visit Bathgate Regal’s website at http://www.bathgateregal.org/ or their just giving page: https://www.justgiving.com/regalcommunity. They are currently fundraising, so if you’ve got a bit of spare cash, why not consider supporting this registered charity? You could even attend a special Outlander themed highland fling at the theatre - details here: https://bathgateregal.cloudvenue.co.uk/highlandersfling)

We’d like to thank Scott for generously giving us his time to answer our questions. We’ve loved watching him in Outlander and wish him all the very best for the future - we know that we’ll be seeing more of him on both stage and screen!
Posted by Outlander Homepage at 9:17 AM