Outlander’s Season-Finale Surprise: How the Show Pulled Off Its Lavish Plot Twist.

The time-traveling Starz drama ended its second season on Saturday with the 90-minute finale “Dragonfly in Amber.”
BY
JULIE MILLER 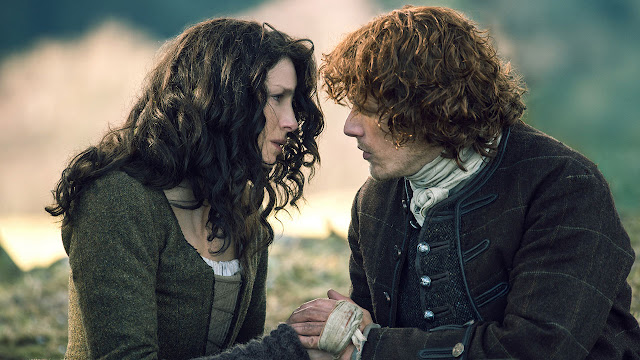 
If you haven’t read Diana Gabaldon’sDragonfly in Amber from the Outlanderseries—the book that inspired the Starz drama’s second season—then you were in for plenty of surprises during Saturday’s season-two finale, also titled “Dragonfly in Amber.”

For one, the episode opens in 1968, with Jamie and Claire’s daughter Brianna (Sophie Skelton) now a fully grown Harvard history student—accessorized with her biological father’s glorious reddish curls; an American accent; no knowledge of the kilted hunk who sired her or her mother’s time-traveling ability; and a chip on her shoulder the size of Scotland. As if that was not enough to give viewers time-travel whiplash, Claire—our stoic protagonist played by Caitriona Balfe—has ascended from nurse to surgeon, collected a few gray wisps in her otherwise perfect bob, and returned to her old Scottish stomping grounds with a suitcase full of chic plaid car coats. Incredibly, this visual is just the jumping-off point for the incredibly satisfying episode—which tenderly veers away from the novel’s time frame while maintaining its story integrity.

In celebration of the episode, we phoned Outlander’s executive producer Ronald Moore to answer our questions about how he pulled off the finale’s great story twist—introducing adult Brianna; why he strayed from the book; and what details were the most difficult to pin down with historical consultants. Ahead, the most intriguing takeaways.

Adult Brianna is actually introduced on the very first page of Gabaldon’s Dragonfly in Amber—with Brianna and Claire showing up on Roger Wakefield’s door in 1968. But when it came time to map out the show’s second season, Moore says, “I thought that that was too big of a leap for the audience to take; to go from Claire and Jamie sailing away on a ship at the end of Season 1 to that knock at the door.”
ADVERTISING


“I thought, let's start Season Two a little bit more chronologically, but show Claire alive in the 40s to tell the audience, ‘Hey, she returned to the 20th century, Jamie's dead, hope is lost.’ I mean, that's already a huge amount of shock for the audience. Then let's hold all the 1960s stuff until the end. In the episode “Faith,” in 207, there's a brief moment where you see Claire and a young Brianna in Boston in the 60s, just to remind the audience of that storyline, and have one more little taste of Brianna before you do the finale.”

The Biggest Change to Brianna

Because the TV series introduced Brianna so late in the season, though, the showrunners had the difficult dual tasks of acquainting audiences with Claire’s adult daughter while subjecting said character to an identity crisis—she discovers that her father is not who she thought he was; and her mother can time travel—in the midst of flashbacks to Jamie and Claire grappling with the Battle of Culloden.

“It was a lot of ground to cover,” Moore admits. “Probably the biggest change we made from the book for her character is giving her an agenda in Scotland. We thought she should have something she wants to find out so that can give her an active role in the events that took place. In the book she's a little bit more passive. She goes there with her mom and then her mom discovers things, and freaks out, and then tells her the story.”
ADVERTISEMENT

“We thought you could get to know Brianna a little bit more and start to like her more as a character if she was on a bit of a journey of her own where she was driven to find out secrets from the past.”

The Trouble of Casting Her Character

“Brianna’s not one of the leads, but she's one of the major characters now in the series,” Moore said of the pressure to find the perfect Brianna. “We knew we were making a pretty big choice with her and with Roger so that casting took quite a while, because you've got an established show, and she has to fit in to that tapestry. You had to believe that she was Claire's daughter and you had to believe that she was Jamie's daughter, as well, and she has to sit with Roger.” Of the process, that ended with selecting an acting newcomer from the U.K., 22-year-old Skelton, he adds, “It was a very complicated casting.” 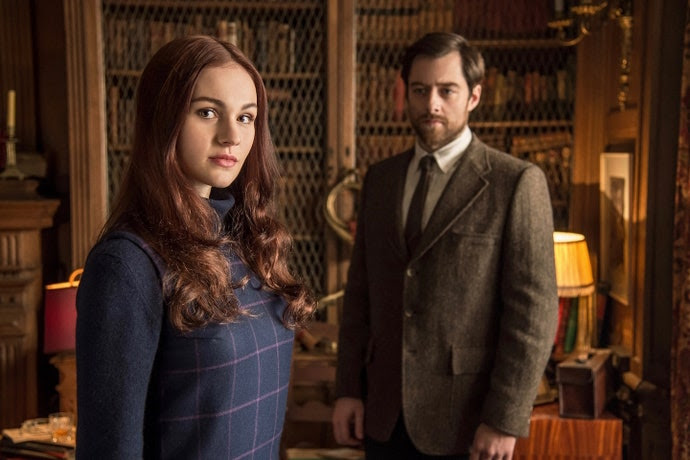 Given that adult Brianna is present in finale scenes without Jamie—yet still has to physically represent him in some way to remind viewers of her lineage—muchdiscussion was paid to the color of Brianna’s hair.

“I'm heartily sick of talking about people's hair color,” Moore says with a sigh. “Let me tell you that.”

Skelton even admitted to Entertainment Weekly that they had to reshoot 16 hours’ worth of scenes because of the hair issue.

“Brianna is supposed to have the same kind of curly red hair as Jamie, but it’s the 60s so it would be more straight with the fashion. So yeah, we ended up changing it.”

Laments Moore, “I have learned what highlights are, and lowlights and rinses; oh my God. At first, you say you're going to go find someone with red hair, and that just becomes way too narrow [of a search], so you open it up; you say, ‘Well, we'll figure out the hair thing later; we'll either color it or put a wig or whatever. We know it has to be red, but let's not limit ourselves to just looking for redheads.’”

How Much Screen Time Will Brianna Get in Season Three?

“She's not as huge a presence in the third book [Voyager, which the third season will be based on] as she will be in subsequent books,” Moore says. “You'll get to see her and you'll see Roger as well in season 3, but the primary story is very much Claire and Jamie.”

“[Costume designer Terry Dresbach] and I talked about it a little bit, but she had a pretty strong vision from the beginning since she knows the books really well,” says Moore. “The one thing we were very much on the same page about was that it wasn't going to be Austin Powers in terms of over-the-top 60s costume. It wasn't going to be big or mod—because people in Scotland at that time were more conservative.”
ADVERTISEMENT

“There were flashes and pieces of what was happening in London,” explains Moore. “But a woman like Claire, literally from the World War II generation, would be more conservative—like with the housecoat that she wears, which is, I think, one of Terry's favorite outfits. There's that very sort of middle-aged woman housecoat that she wears in the scene with Roger, when they're having a glass of scotch together. She's not running around in go-go boots, you know?”

Getting History Right. . . Even for a Fictional Series

“We have historians who are there to be used as resources and who also provide commentary on individual episodes and scripts, and saying, “Well, this is not quite accurate,’ or, ‘This, even though Diana wrote it, this isn't what historically happened,’” Moore explains. “You always want to know why you're doing something [in the script]. We have medical researchers as well—there's a huge support system of people that help keep all the elements straight.”

Since the second season centered on the Battle of Culloden, there was much debate about ensuring a historical depiction of the events leading up to it. “We're always trying to make it clear to the audience what was happening on the battlefield and how the armies got to where they eventually had their fateful encounter,” explained Moore. Sometimes, they had to fudge details, like the amount of time it took the armies to get from point A to point B, or where the armies camped.

“The arguments within the war councils of the Jacobites are fairly accurate,” Moore says. “They really did have that kind of division. [Lord George] Murray and [Secretary] O'Sullivan were the principal antagonists towards each other, and “Bonnie Prince Charlie” was kind of the guy in the middle trying to make it all work out, but probably the most notes we got were about all the various maneuverings of the Jacobite army.”

We had to ask how long viewers will have to wait before seeing our time-crossed protagonists reunite. The moment we finished the question, though, a publicist piped in to prevent Moore from answering. But the showrunner maintains that he never considered ending the second season with Jamie and Claire reuniting. “We're following the book path and that definitely wasn't in the cards in the second book, so we never even discussed that,” Moore says.

Although there is no way of knowing how long we will have to wait for a Jamie-Claire reunion on Starz, Outlander fans can look to Voyager, the third book in Gabaldon’s series which will be the basis for the show’s upcoming season, for the answer. The literary reunion takes place in Edinburgh, Scotland—where the show will be filming its third season.

Posted by Outlander Homepage at 8:28 AM