YaHoo TV talks to Graham McTavish and Gary Lewis about the brotherly love! Warning: This postmortem contains spoilers for the “The Hail Mary” episode of Outlander, which aired June 25.

They’re dropping like flies in the Outlanderverse. This week we said goodbye to two important characters — Alex Randall and Colum MacKenzie — and with the Battle of Culloden now seemingly unpreventable and looming large, it’s highly unlikely that the morbid trend will reverse when the Season 2 finale airs on July 9.

“The Hail Mary” episode put the final pieces together on how Alex, Black Jack, and Mary Hawkins all figured into Claire’s future husband Frank’s family tree just before the kind gentle Randall brother drew his last breath. It was devastating to watch, but at least Alex got to put his ducks in a row, request a final favor of his sick-and-twisted sibling, and make sure his baby mama and unborn child would be provided for.

Dougal MacKenzie (Graham McTavish) was not quite so lucky when it came time for his deathbed confessional. The long-infirm Colum, the older brother and MacKenzie clan leader with whom he has consistently butted heads for two seasons, arrived in Inverness and Dougal temporarily rejoiced, thinking that his brother had finally come to his senses and was ready to join the Jacobite cause. He had not. Instead he had come to make his wishes known about the future of the clan (Jamie Fraser would take the MacKenzie reigns until his son came of age instead of Dougal) and to add insult to injury, Dougal would not be in charge of mentoring Colum’s son who is actually Dougal’s offspring. Dougal felt like it was just one more way Colum was punishing him, but Gary Lewis (Colum) interpreted the move differently. 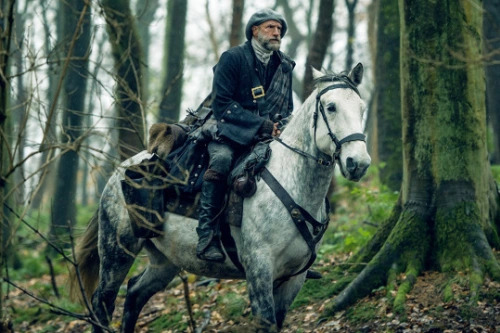 “No anger, retribution, or malice in Colum’s business with Dougal,” Lewis tells Yahoo TV. “Colum seeks to understand the developing situation and makes decisions based on what he thinks will be best for the clan, many years down the line. He sees that Dougal is incapable of that. Dougal is more about instant gratification. No thought or foresight. Graham says that Dougal is ‘complicated.’ Whereas he is really just a havering arse driven by his knob and his pride. So Jamie is the man.”


This was not the first time they disagreed. Quite the contrary if you will recall the Geillis affair that ended in an offspring, the revolution, what to do with Claire, and so on. “They had an extremely complicated relationship. They are at each other’s throats a lot but at the end of the day they are brothers and they mean a lot to each other,” McTavish explains. “And it all leads to that moment. Very much so. That scene with Gary where Dougal tells him how he really feels in particular was a very challenging, interesting one for both of us. What I brought to it or tried to bring to it was relating it to my own life experience and particularly the regrets that you have when someone dies, regrets of things you could have said to them or asked them. I thought of my own father and, in that case, those are regrets that I have. For Dougal to pour his heart out as he does and talk honestly, possibly for the first time, and then for his brother to die while he is doing it and for Dougal not to realize what has happened until it is too late. It is utterly heartbreaking. If he himself didn’t die later in the series, he really would have been consigned to a prison of his own making.” 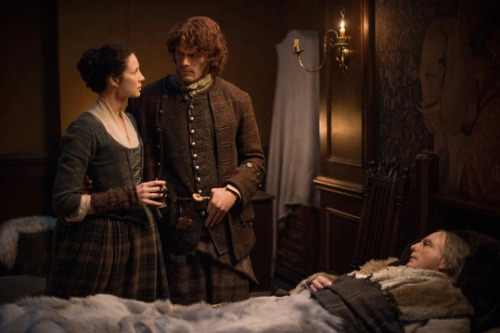 Unlike the audience, Dougal had no idea that Colum had asked Claire for some sort of potion to help him end the suffering. “As he sees it, it really is time to go. He faces challenges at every level; physical, familial, political, but he plays the hand he has been given,” Lewis says. “Think about what might have happened if he made all those decisions then stayed around. His body was near the end. Sin didn’t come into it. Better to take care of everything then leave. He cares for the lives of his people beyond his own life as he is essentially good hearted.”

And if you are anything like us, you were hoping he at least heard some of the heartfelt discourse before shuffling off that mortal coil, but Lewis shot down that wishful thinking. “I never heard a word of the speech. I was gone.”

Both actors walked away from the scene reminded that life is short.

“I suppose the lesson is, make that phone call. Don’t wait until it’s too late. But hey, that’s Dougal all over. No thought. No foresight,” Lewis says.

McTavish agrees, but also points out that Colum and probably everyone who has ever lived and loved in the history of humankind is just as guilty. “It’s heartbreaking because you can’t take it back. It’s that moment in King Lear where he says, ‘Never, never, never, never.’ In that case he is realizing that he will never be able to speak to Cordelia again. He will never have that chance to tell that person how he feels again and this scene reminded me of that. It is a reminder of what’s fundamental and important in life and Dougal is as guilty as anyone in real life of forgetting that along the way. As is Colum. It was a powerful and really beautifully written scene.”

Both Glasgow gents who came up together in the industry and theater also share the opinion that these intensely rich characters only benefitted from their longtime association. “Working with Graham was a bonus. We get on very well and were able to create and feed a few extra rivalries and verbal clashes into the work,” Lewis says before adding that there will be a lot to miss after his on-screen death. ”Great people. All of them. What a cast and crew. Great work. I hang onto the memories.”


Posted by Outlander Homepage at 8:58 AM