It’s no secret that Starz’ breakout hit about a time-traveling nurse has a secret ingredient: Her name is Caitriona Balfe. And she’s here to get dirty and have a drink (and maybe some sex).

In Outlander, Starz’s breakout period drama about a time-traveling nurse caught in a centuries-spanning, life-threatening love triangle (returning for the second half of season one on April 4), Caitriona Balfe, who plays lead Claire Randall, finds herself at the center of an on-screen sexual revolution. The game changer: After six episodes of sexual tension, forced-together newlyweds Claire and virginal Jamie (Sam Heughan) finally disrobe, but instead of porny showmanship we’re presented with egalitarian nudity and vulnerability. Here, as promised in the April issue of ELLE, an extended Q&A with Balfe plus an exclusive sneak peek at the hotly-anticipated new episodes:

What initially drew you to the role of Claire?

She felt like a very modern woman. She’s very intelligent, very strong, and has found herself in a place where she constantly has to fight to be who she is. It’s such a crazy concept for her not to stand up and fight for what she believes is right and just. She never sees herself as a victim and uses whatever she has at her disposal to get through adverse times.

Yes, she’s a tough cookie. But vulnerable, too. A full-spectrum woman. Did you have any “Claires” in your life who inspired you?

So many! I have two incredible sisters who have very high-powered jobs and kids and, you know, both have their masters; one runs triathlons all the time. Or my grandmother, who was a nurse during the second World War. Women of that generation, they had to be everything. They were going out into the workforce and still had to be caretakers.

What about fictional characters?

When I was a kid I loved Little Women. Jo! I also loved Cagney and Lacey who were very complicated women who were also very strong. These things seep into your psyche without you even realizing it.

How do you relate to Claire?

I am completely confident that I would not be able to go through so much and then get up and brush it off like she does. But I definitely think that her competency has shown me how strong I am. You know, I might be accused of being headstrong like her from time to time. I also like how she isn’t pious. She likes to get dirty, have a drink. And sexuality is a big part of her life.

Do you think some of her appeal is fueled by the feminist awakening going on right now?

Claire falls in love and gets married, but she is very uncomfortable with the idea of sitting back and being a wife. She still has her passions and her vocation of being a healer. I think women today are really struggling with these dual roles: How do you have a full-time career and be ambitious and still take care of your family? We’re having so many conversations about these same issues today.

And then there’s how the show portrays sex, with a women’s perspective in mind.

Exactly. It’s not just about women as objects. So often women are there just to be looked at and be objectified for the titillation of the male audience. We turn that on its head—without, hopefully, objectifying [men] too much—but I think it’s nice to see the female side of it. I got a letter from a fan who was writing on behalf of her 82-year-old mother and she was saying how much her mum loved it, even ‘the naughty bits.’ I think, for so long, women, especially the older generation, weren’t allowed to express that part of ourselves. It’s wonderful that we are now able to do it.

Speaking of fans, I hear Outlander’s are a particularly devoted bunch.

They’re incredible. They designed a tartan and registered it for me and I even got my own special blend whiskey. They’ve also helped me raise so much money for World Child Cancer. The Outlander novels were first published in 1991, so they’ve all waited so long for this. Also, [showrunner] Ron [Moore] has adapted them with such a sensitivity. He and the writers are all about making these characters as real as possible and I think that’s why the show resonates with people so much.

What was it like to film “The Wedding,” which was pretty much the hottest episode on television last year?

By that point, Sam and I had been working together for eight months, so we’d built up a friendship. We all talked a lot about it beforehand and rehearsed every detail to make it as honest as possible. We really tried to show how there was an attraction there, but there was so much going on with [Claire], so lots of conflict too. She wasn’t ready to jump in bed with this person, so we had to slowly break down the barriers of guilt to show the love. The great thing about our writing team is that whenever we rehearse a scene, they are so open to anything Sam and I have to offer. There was a lot of, ‘Well, you know, I don’t know if she would say or do this and she might wait a little before this.’ There was a lot of conversation and willingness on their part to work on things. I think that openness really does wonders for our show.

Besides the, um, sex scenes, what else do we have to look forward to in the rest of season one?

It’s now about making a marriage work, which is quite interesting. Many stories end with a marriage, but this one happens very early on. I think up until this point Claire has had a very singular journey and mission: She wants to get back home. But now she has to contend with the reality of staying, and I think it is quite jarring for her. It really tests her relationship with Jamie. These problems ultimately end up strengthening their bond, but it’s not an easy road. 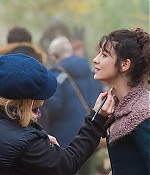 Posted by Outlander Homepage at 8:07 AM