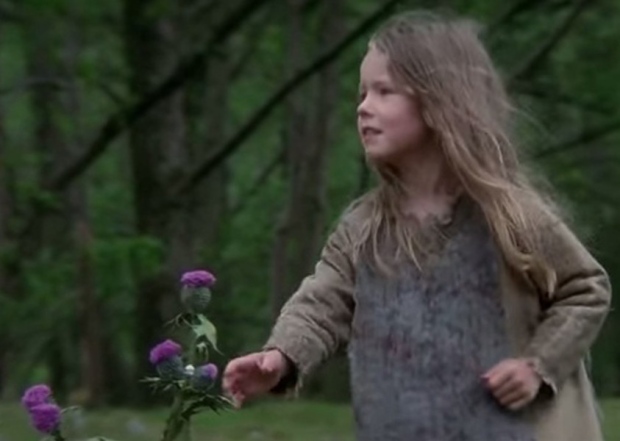 Mhairi Calvey as the young Murron MacClannough in Braveheart.


The stunning Glasgow-born actress and model is to play Flora MacDonald in a movie about Bonnie Prince Charlie..

Miss Calvey, who was bullied by schoolmates over her part in Braveheart, battled depression for 10 years, which led her to start up her own foundation - Think Differently Do Differently - to help others.

But she bounced back and this year starred in sci-fi thriller Abduct, with William B Davis and Sienna Guillory, and now she has landed the part of Flora MacDonald in The Great Getaway, which will be announced at Cannes.

Charles’s subsequent flight is legendary. Hiding in the moors, he travelled barely ahead of the government forces. Though many Highlanders saw Charles, and indeed aided him, none of them betrayed him for the £30,000 reward.

Flora MacDonald helped him escape pursuers on Skye by taking him in a small boat disguised as her Irish maid, Betty Burke.


“I am about the same age as Flora was when she helped Bonnie Prince Charlie to escape,” said Miss Calvey, who celebrated her 27th birthday last week.

“I read the script twice when I was sent it - it was that brilliant. I could not put it down. I studied her at school - I never thought I would end up playing Flora one day. It is a dream come true.
“I’ve also done a lot of research on Flora. She was the most extraordinary woman who lived an extraordinary life. It is an honour to play part of it.

“It will be nice for me to do something in my native land too. I still remember being on set and doing Braveheart. It’s incredible that I am to appear in two movies about iconic Scottish historical figures. I couldn’t have dreamt it up.

Mhairi beat thousands of other actresses around the UK and USA for the role in Braveheart. It was clear then that she had something specialRobbie Moffat

“There are many aspects of Flora I want to portray but she was a genuinely nice person. She was incredibly grounded and had a lot of gumption. She knew how to deal with people - especially men! I can’t wait to play her. I am more than excited.”

Miss Calvey, who lives in Glasgow and London, admitted there was a romance for Flora in the film.
“I don’t want to give too much away - but there are some tender moments,” she said.

She moved to Yorkshire with her mother when she was 11.

“During that time, I was bullied a lot and had various issues there,” she said.

“Then when they found out about Braveheart as well that led to a lot of bullying and even jealousy from acting tutors. They tried to make sure I didn’t act.

“I wasn’t allowed in any of the school plays. It was a real battle.”

After school, Miss Calvey completed a performance course at York College and went on to study at the Guildhall School of Acting.

Within four months after graduating in 2011, she was given a lead role in the feature film Any Minute Now.

When she was age 18 she appeared in the event Dressed To Kilt in Los Angeles and New York alongside Sir Sean Connery, Brian Cox, Gerard Butler, Linda Hamilton, Ashley Jensen, Mike Myers.

The part of Flora MacDonald, who helped the Young Pretender escape to Skye, had been offered to Kristen Stewart, who played Bella Swan in the internationally successful Twilight films.

But in the end the film’s producers decided to opt for a Scottish star.

Miss Calvey will certainly be able to handle the battle scenes in The Great Getaway. She was trained in Filipino martial arts and Samurai sword fighting for her role in the television pilot Bloodline - and is also proficient in fencing and unarmed combat.

Former Queen’s composer Sir Peter Maxwell Davies is to write the music for the new movie, which will also include the biggest battle scene ever shot in Scotland.

It is the first movie music Sir Peter has composed since he worked on Ken Russell’s 1971 films The Devils and The Boyfriend, which between them started Oliver Reed, Vanessa Redgrave and Twiggy.

Dumfries and Galloway is to be the setting for the Battle of Culloden for the new £6.5m film and the prince’s subsequent flight to Skye.

Already actors Peter Mullan and Brendan Gleeson, who also starred in Braveheart, have been lined-up.

Filming on The Great Getaway will begin in the summer with the battle scene involving more than 500 extras.

The Battle of Stirling Bridge which involved 2000 extras in Braveheart was ironically filmed in Ireland.

The Culloden battle will be constructed by Seoras Wallace, who shot to fame when he directed the fight scenes in Braveheart. He has worked on more than 100 major films including Gladiator and Saving Private Ryan.

The new film is the first major movie on Charles Edward Stuart since Bonnie Prince Charlie, the 1948 production starring David Niven and Margaret Leighton - legendary for its nightmarish shoot and catastrophic box-office takings.

The Great Getaway has been written by Glasgow-born Robbie Moffat, 60, who said it will not be “anti-English in any way.”

Scenes will also be shot in Skye and South Uist - the route followed by the fleeing Prince - as well as the remote Knoydart peninsular, the mountains where Bonnie Prince Charlie is supposed to have taken refuge after Culloden. Lewis will also be one of the locations.

“Mhairi beat thousands of other actresses around the UK and USA for the role in Braveheart. It was clear then that she had something special - and it is even clearer now. That is why we picked her for the role of Flora,” said Mr Moffat. “She is perfect for the part.”

The prince has not yet been cast, but Mr Moffat confirmed that Glasgow born X-Men star James McAvoy - who also appeared in The Last King of Scotland, Atonement and Filth - was among those that had been approached.

Posted by Outlander Homepage at 9:02 AM