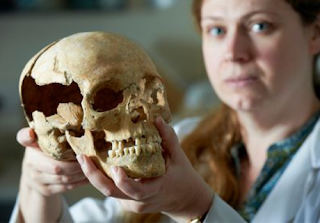 London - A team of construction workers employed at demolishing an old pub last month in the Bermondsey district of the London borough of Southwark, have discovered an ancient and badly damaged wooden crate containing three pierced human skulls, presumably the severed heads of criminals or traitors that had been impaled on pikes and displayed at the southern gatehouse of the Old London Bridge. The remains, which were sent to the Ireland to be analyzed by a team of archaeologists associated with the National Museum of Ireland, have turned out to be those of 14th Century rebel heroes of the Wars of Scottish Independence, including that of the former Guardian of Scotland, William Wallace.


All three heads have visibly been dipped in tar and boiled for preservation, before being pierced by pikes or spears. According to the various tests and analysis realized on the three heads, two of the skulls have been proven by DNA, to belong to the brothers, John and Simon Fraser, while the third is strongly believed to have belonged to William Wallace. All three men were indeed condemned to being executed in 1305 and 1306, and many contemporary writers describe how the head of the three men were exposed at the same time atop the London Bridge, starting a tradition of gruesome dissuasion that was to continue for another 355 years . The Bermondsey district was less densely urbanized at the time and it is quite possible that after their period of public exposure, the heads were simply buried near the foundation of the bridge.

Two of the skulls, turned out to have very similar genetics suggesting they were siblings. DNA comparison with descendants of John and Simon Fraser of Oliver and Neidpath, have confirmed that these were indeed the remains of the famous rebel knights banneret.


All three rebels were in fact separately condemned to being hanged, drawn and quartered, an exceptionally cruel, long and bloody method of public execution. Convicts were fastened to a hurdle, or a wooden panel, and drawn by horse to the place of execution, where they were hanged almost to the point of death, but released while still alive. They were then emasculated, eviscerated and their bowels were burnt before them, before they were finally beheaded. Their bodies were then cut into four parts, to be exposed like the head, in different parts of the Kingdom.


In the case of William Wallace, contemporary chronicles state that his preserved head was placed on a pike atop London Bridge while his limbs were displayed, separately, in Newcastle upon Tyne, Berwick-upon-Tweed, Stirling, and Perth.


Sir William Wallace (from the Gaelic Uilliam Uallas) was a Scottish member of the lesser nobility who became one of the main leaders of the rebels during the Wars of Scottish Independence. Along with Andrew Moray, Wallace defeated an English army at the Battle of Stirling Bridge in September 1297, and was appointed Guardian of Scotland by an assembly of noblemen. He commanded the Scottish army until his defeat at the Battle of Falkirk in July 1298, when he resigned from his function. He was captured in August 1305 in Robroyston, near Glasgow, after the betrayal of the Scottish knight John de Menteith, and was handed over to King Edward I of England, who had him tortured and killed for high treason and crimes against English civilians. He is depicted in the very inaccurate but award-winning historical drama Braveheart, directed by and starring Mel Gibson, that was released in 1995.

According to most experts, the historical William Wallace most likely wore chain and plate mail and looked more like a medieval knight than a painted Celtic warrior with a kilt.

The remains of the three men will be sent to Scotland in a few weeks, after the scientists have gathered all possible information from the bones. They should then be placed in the crypt of the Cathedral of Our Lady of the Assumption, a Roman Catholic church located in Edinburgh.
Posted by Outlander Homepage at 8:12 AM